Posted on December 31, 2015 | Comments Off on The influence of semi-custom orthoses on multi-segment foot kinematics in males

The current investigation aimed to investigate the influence of semi-custom orthoses on multi-segment foot kinematics and plantar fascia strain in recreational runners. Fifteen male runners ran at 4.0 m.s-1 with and without orthotics. Multi-segment foot kinematics and plantar fascia strain were obtained using a 3D motion capture system. Differences between orthotic and no-orthotic conditions were examined using paired samples t-tests. The results showed firstly that orthoses did not significantly (p>0.05) improve plantar fascia strain. Relative transverse plane ROM rearfoot-tibia articulation was however significantly (p<0.05) reduced when wearing orthotics. This indicates that there may be some benefit from orthotic intervention. However, the mean reduction in angulation between orthotic and no-orthotic conditions was very small and thus further prospective investigations regarding the clinical efficacy of semi-custom orthoses are required.

Distance running associated with a large number of health benefits, both physical and psychological [1, 2]. However, epidemiological research has shown that chronic pathologies are a frequent complaint amongst runners [3]. As many as 80% of runners will experience a chronic injury as a consequence of their training over a one year period [4].

Foot orthoses are an extremely popular accessory for runners. It has been postulated that foot orthoses are able to attenuate the high rate of injuries in runners. As such they have received considerable research attention. The majority of research into the efficacy of foot orthoses has examined either impact loading or rearfoot eversion. Sinclair et al., [5] showed that an off the shelf orthotic significantly reduced both loading rate and tibial acceleration parameters but did not change rearfoot eversion.

Laughton et al [6] showed similarly that foot orthoses served to significantly reduce the loading rate of the ground reaction force but once again did not affect rearfoot eversion. Dixon, [7] investigated the effects of placing a commercial orthotic inside a military boot. The findings showed that the orthotic device reduced the vertical rate of loading in comparison to running without orthotic intervention, although rearfoot eversion remained unchanged.

The aim of the current investigation was therefore to examine the effects of semi-custom orthotics on 3D multi-segment foot kinematics and plantar fascia strain during the stance phase of running. This work may be helpful to runners who suffer from foot pathologies related to mal-alignment of the foot itself that may be treatable through orthotic intervention. The current investigation tests the hypothesis that orthotic intervention will serve to attenuate plantar fascia strain and reduce coronal and transverse plane motions of the foot segments.

Twelve male (age 22.1 ± 3.2 years, height 1.77 ± 0.07 meters, and body mass 73.24 ± 6.07 kg) recreational runners volunteered to take part in the current investigation. All were currently free from musculoskeletal pathology and did not have any history of prior surgery. All participants provided written informed consent and ethical approval was obtained from the University of Central Lancashire STEM ethical committee, in accordance with the principles documented in the declaration of Helsinki.

A commercially available orthotic (Sole, Softec response) was utilized for the current study. To mould the orthoses they were placed into a pre-heated oven (90°C) for three minutes. Following this the orthotics were then placed inside the participants shoes. Participants were asked to stand upright without moving for two minutes to allow the process of moulding the orthotics to take place.

Participants completed five trials running at 4.0 m.s-1 ± 5% with and without orthotic intervention. The order in which participants ran in each condition was counterbalanced. Multi-segment foot kinematics were obtained at 250 Hz using an eight-camera motion analysis system (Qualisys Medical, Sweden). Participants struck an embedded force platform (Kistler 9281CA, Kistler Instruments, UK) sampling at 1000 Hz with their dominant foot. The stance phase of running was determined as the time over which >20 N of force in the axial direction was applied to the force platform.

The calibrated anatomical systems technique (CAST) was used for modelling the foot and shank segments [11]. Markers were placed on anatomical landmarks in accordance with the Leardini et al [12] foot model allowing the anatomical frames of the rearfoot, midfoot, and forefoot to be defined. Markers were also positioned on the medial and lateral femoral epicondyles to allow the anatomical frame of the tibia to be delineated and a rigid tracking cluster was also positioned onto the tibia. Participants wore the same footwear throughout (Saucony Pro Grid Guide II, Saucony, USA). Windows were cut in the experimental footwear at the calcaneus and first metatarsal locations. The pre-established guidelines for length and width outlined by Shultz & Jenkyn [13] were adhered to.

Data were digitized using Qualisys track manager and exported to Visual 3D (C-motion, Germantown USA). Marker trajectories were filtered at 15 Hz using a low pass zero-lag Butterworth filter. This frequency was selected based on residual analysis [14]. Cardan angles were used to calculate 3D rotations of the foot segments. Stance phase angles were computed using and XYZ cardan sequence of rotations between the rearfoot-tibia, midfoot-rearfoot, forefoot-midfoot, and forefoot-rearfoot. Discrete 3D kinematic measures which were extracted for statistical analysis were 1) angle at footstrike, 2) angle at toe-off, 3) range of motion (ROM) from footstrike to toe-off during stance, 4) peak angle during stance, and 5) relative ROM (representing the angular displacement from footstrike to peak angle). Plantar fascia strain was quantified by calculating the distance between the first metatarsal and calcaneus markers and quantified as the relative position of the markers was altered. Strain strain was calculated as the change in length during the stance phase divided by the original length [10].

A Shapiro-Wilk test was used to screen the data for normality, and it was confirmed that the normality assumption was not violated. Effect sizes for all statistical main effects were calculated using eta2 (η2). Statistical procedures were undertaken using SPSS v22 (IBS, SPSS Inc USA). 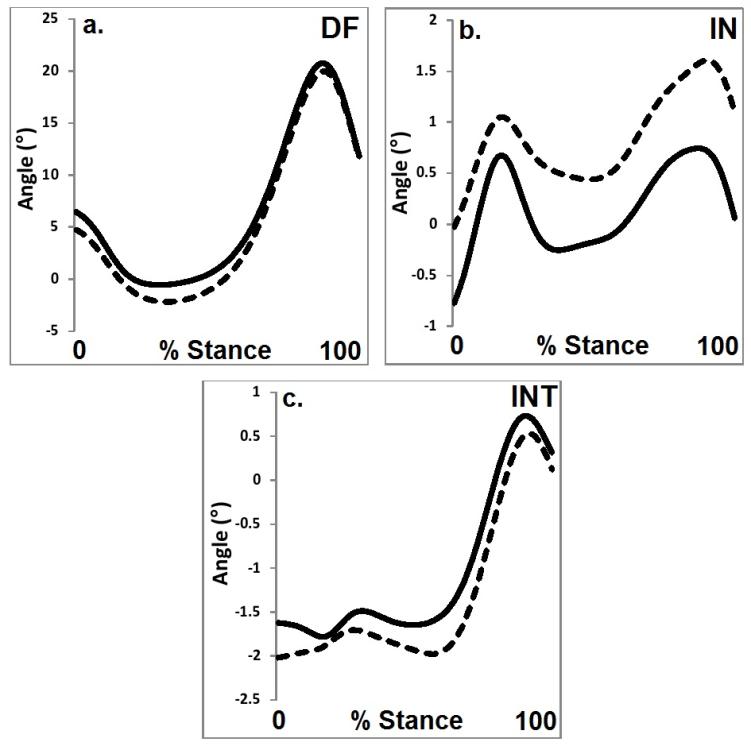 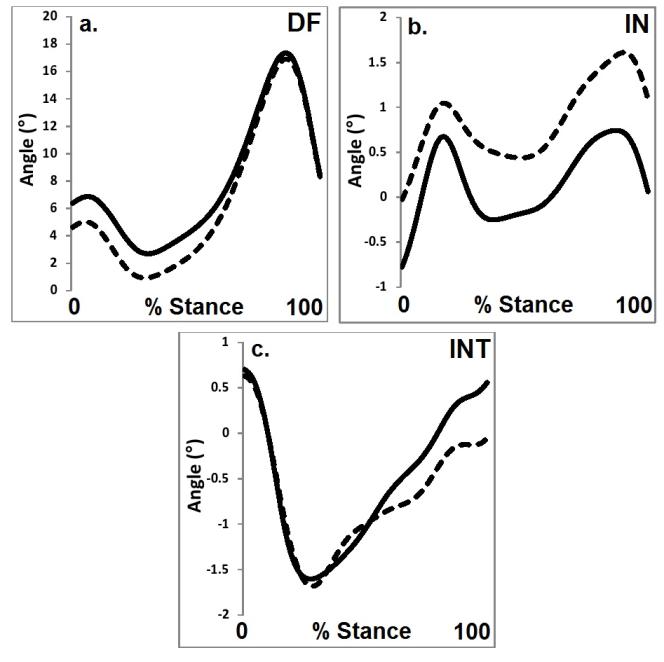 The aim of the current work was to examine the effects of semi-custom orthotics on 3D multi-segment foot kinematics and plantar fascia strain during the stance phase of running. To the authors knowledge this represents the first study to investigate the effects of mouldable orthoses during running.

The first important observation is that the semi-custom orthoses did not reduce the strain experienced by the plantar fascia during the stance phase of running. This opposes our hypothesis and also the findings of Ferber & Benson [10] in which significant reductions in plantar fascia strain when wearing semi-custom orthoses. This finding does however concur with the results of Sinclair et al [9] who showed that off the shelf orthoses did not reduce plantar fascia strain during running. Plantar fasciitis is considered to be caused by excessive and frequent strain imposed on the plantar fascia itself [15], therefore the current investigation supports the notion proposed by Sinclair et al [9] in that orthoses may not be effective for runners seeking to treat plantar fasciitis. More importantly it also appears based on this study that a semi-custom orthotic does not provide any additional benefits in relation to an off the shelf device, although further comparative work is required before this can be fully substantiated.

In addition, the current investigation showed that the semi-custom orthotic served to mediate reductions in transverse plane relative ROM of the midfoot-rearfoot articulation. This finding concurs with our hypothesis and also those of Sinclair et al [9] who demonstrated that foot orthoses significantly reduced coronal and transverse plane rotations of the foot segments. Excessive transverse plane articulations between the foot segments have been associated with injury aetiology [16]; therefore it appears that there may be some benefit from orthotic intervention to improve foot function during running. However, the mean reduction in angulation between orthotic and no-orthotic conditions was very small and thus further prospective investigations regarding the clinical efficacy of semi-custom orthoses are required.

In conclusion, whilst the effects of foot orthoses on the biomechanics of running have been extensively researched, the current knowledge with regards to the effects of semi-custom orthoses is limited. This study aimed to address this by providing a comprehensive investigation of 3D multi-segment foot kinematics and plantar fascia strain when wearing a semi-custom orthotic device. The findings from the current study show that semi-custom foot orthoses do not serve to influence plantar fascia strain. In addition the transverse plane relative ROM of the rearfoot-tibial articulation was shown to be significantly reduced when the orthotic was used. Given the proposed relationship between transverse plane rotations of the foot segments and the aetiology of injury, there may be some benefit from orthotic intervention to improve foot function during running. However, the mean reduction in angulation was very small and thus further prospective investigation regarding the specific clinical efficacy of semi-custom orthoses is required.