Purpose:  The purpose of this study is to determine the inter-rater reliability of the LAA taken at the bottom of the foot’s postural range of motion RCSP(Relaxed Calcaneal Stance Posture) as compared with the LAA when the foot is in a toe off posture at forty degrees of heel elevation.
Design:   An investigation into a new technique for capturing Longitudinal Arch Angle in patients.
Samples:  Subjects submitted voluntarily from a heterogeneous sampling of factory workers in rural Tennessee.
Methods:  LAA captured in RCSP and toe off posture using the iOS LAAngle™ App
Main Outcome Measures:  We measured the LAA of 85 sets of feet with the iOS App to obtain the LAA in RCSP and Toe off conditions.
Results:  The IntraClass  Correlation Coefficient (2,1) was 0.7 for RCSP and Toe off.  This was across an age range of 17 to 68 years with 50 male and 35 female subjects.
Conclusions: The  iOS LAAngle™ App is an efficient and reliable method for calculating a patient’s LAA.
Key words: Longitudinal Arch Angle, Foot Posture, MASS Posture,  biomechanics

Additionally McPoil et al studied the relationship of the static biomechanical examination values in relation to calcaneal eversion angles taken in gait as measured with a motion analysis system and found that the values measured in the static biomechanical examination proposed by Root et al did not correlate with dynamic foot function [3]. Measurements of Radiographs have also been used to evaluate the foot biomechanically but these images are taken with the foot in angle and base of gait with the foot in its relaxed calcaneal stance posture [4]. They therefore may give the clinician information on the extent of over pronation that is possible when the foot fully collapses but tell us nothing about the corrected posture.

They do have some value in determining pre-operative collapse as compared to post-operative correction but fail to give any information regarding the extent of correction that is either possible or ideal. We were unable to find a study that supports a test that gives the clinician any information as to how much postural correction is possible with a custom molded prescription foot orthotic.

Donatelli proposed a measurement of the angle between the medial malleolus, the navicular tubercle, and the medial aspect of the first MTP joint [5].  Jonson et al studied a similar angle in young healthy Navy subjects.  In this study, dots were made on the center of the medial malleolus, medial prominence of the navicular bone and medial head of the first metatarsal head.  The angle was measured manually with a goniometer with the patient in the relaxed calcaneal stance posture.  Again, the bottom of the postural range of motion of the foot, was tested giving the clinician no indication as to how much postural correction is possible.  They demonstrated a high inter and intra-rater reliability (0.81) and the test yielded almost identical results of both right and left feet.  Although, they stated their sampling was of relatively lean and physically fit young males with easy to identify boney prominences, subjects from a specific geographical region [6].

McPoil and Cornwell did further testing to determine the correlation of this angle between static stance and walking [7], and showed that the relaxed calcaneal stance posture LAA correlated 90% to the same angle measured at the lowest posture achieved during walking.  McPoil and Cornwell went on to compare this fully collapsed LAA between standing and running and found approximately an 85% correlation[8].  The LAA was further studied by Heidi Burn et al who concluded that the “LAA is been shown to be a good static measure for dynamic foot function and can reliably be implemented in a normal clinical environment to evaluate and assess the efficacy of the prescribed foot orthoses” [9]. Again, the LAA was only tested in its fully pronated or maximally collapsed posture.

We propose an exact protocol for measurement and introduce an iOS App to measure the LAA that may improve the accuracy of this test.  Additionally, the LAA is measured in two different postures.  The relaxed calcaneal stance posture LAA is compared to the LAA when measured at 40 degrees of rear foot elevation.  This angle was selected because it closely approximates MASS posture, as defined by Glaser et al as the Maximal Arch Supination Stabilization Posture which is the most elevated posture the foot can attain at midstance with the heel and forefoot in full contact with the supporting surface with the soft tissues evenly compressed.  Glaser proposes this posture as a corrective geometry for a calibrated leaf spring to apply an equal and opposite range of forces to those imposed by the body during the gait cycle.  Glaser has theorized that this shape leaf spring may assist the foot in resisting the repetitive downward forces of walking and aid the foot in achieving a more functional posture for propulsion and thereby alleviate many foot symptoms and possibly reverse some deformity of the foot as well as improve the passage of center of pressure through the foot during gait.

Higbie et al demonstrated that foot orthotics made in MASS posture initially transferred 44% more force to the first metatarsal head at toe off than any orthotic previously tested at Georgia State University and at 6 weeks the improvement over previous technologies measured 61% [10].  Cobb et al demonstrated a significant improvement in postural sway (movement of the body’s center of gravity from right to left) in patients with greater than 7 degrees of forefoot varus [11].  Piernowski and Trotter tested the inter and intra-rater reliability of the casting with Canadian cPeds.  They found intra-rater reliability to be significantly improved with MASS Posture casting technique [12].  Piernowski and Trotter also tested the Biomechanical Efficiency Quotient(BEQ) on patients wearing MASS posture orthotics and found significant improvements in BEQ using MASS Posture [13] which correlated to patient outcomes in a separate paper [14].  Garbalosa et al showed that foot orthoses that incorporate total contact and direct support of the medial longitudinal arch are clinically significant in their effect on the kinematics of the foot as well as their ability to reduce painful symptoms of the lower extremity [15].

Eighty-Five subjects were selected for the study.  Due to the non-invasive nature of the measurements taken no Human Subjects committee approval was deemed necessary but each patient did sign an informed consent form.  Subjects did not receive payment for their participation.   Patients with previous surgical correction were eliminated.  There was 85 subjects total, 50 were male and 35 female and ranged in age from 17 to 68 years with a mean age of 40.7 years.  Three certified pedorthists performed the testing.  A pilot study was performed to determine the protocol.  The testers and authors met to approve final protocol.  An App was written to capture the LAA in real time with automatic capture at the lowest posture of the foot:  Relaxed calcaneal stance posture and the posture the foot will attain at a 40 degree angle between the plane of the plantar aspect of the foot and the ground.  The following protocol for capturing the LAA was used in this experiment: 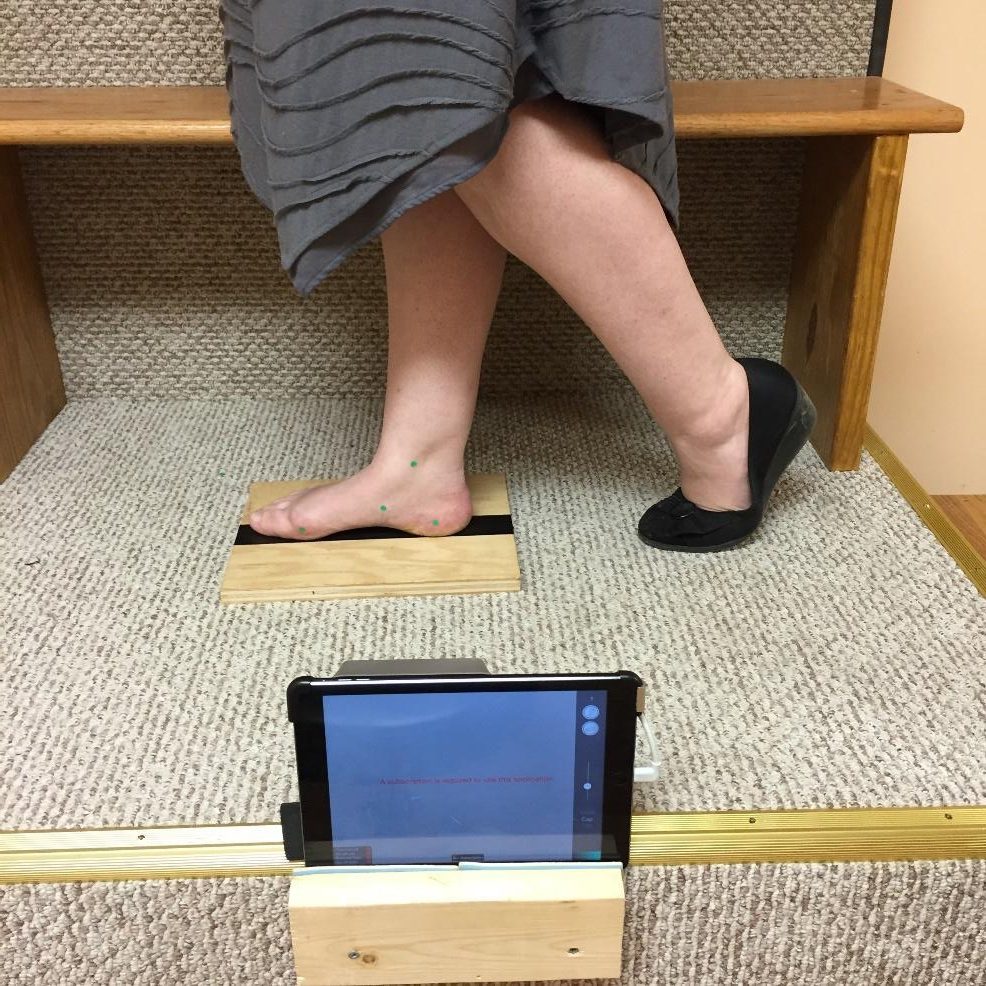 Each test was repeated independently and single blind with three different examiners.  Each examiner placed the dots independently and did all recording without knowledge of prior findings.  Examinations were performed consecutively on the same visit.

Interexaminer reliability were documented for the research subjects by calculating the mean absolute difference and standard deviation between paired measurements for ratio data.  Intraclass correlation coefficient [ICC(2,1)] version of the ICC was used to enable abstraction to other examiners.  Standard deviations, ranges, and mean values for males and females were calculated for each of the variables measured.

The subjects came from a diverse sampling of male and female with varying heights, weights, and ages.  The majority of the subjects were born and spend most of their time in Tennessee.  The relatively heterogeneous sample supports the generalizability of the results to other populations.   Additionally, the subjects were of varying body types.  Bony prominences, therefore, may have been palpated with more or less difficulty in this sample than in other samples or populations.

The authors present a clinical test to determine the amount of postural correction possible in each patient reliably and repeatedly by determining the LAA with the foot in RCSP and toe off postures.  This fast and simple examination tool can be used in a clinical setting to determine whether or not a patient will benefit from a prescribed custom foot orthotic.  It can also be used to determine the extent of correction possible.   This affords the practitioner the ability to present third parties with justification for the use of prescription foot orthoses as well as complete documentation.

The reasoning for utilizing custom foot orthoses is that the patient’s foot posture was collapsed to a measurable quantity, the LAA.  The correction of this same foot can be achieved to the anatomical limit as determined by the measurable quantity; the LAA at 40 degrees.  Based on the results of this study, it is further postulated that the clinician or patient can use this test as stated by Heidi Burn et al to “reliably be implemented in a normal clinical environment to evaluate and assess the efficacy of prescribed foot orthoses” [9].  Meaning; the iOS LAAngle™ App can be used as a test to evaluate and assess the efficacy of current and future foot orthoses for the patient.  The degree to which custom prescribed foot orthoses can correct posture can be determined utilizing the LAAngle™ App.

Foot posture can be measured using the LAA and is made easier, faster, and with reliability with the iOS LAAngle™ App.  Since postural collapse, whether attributed to single axis rotation or all axis movement, is responsible for the development of many foot ailments, injuries and deformities seen in clinical practice, it is advisable to take a baseline measurement of LAA in both RCSP and elevated postures and calculate the difference in these postures in a reliable repeatable fashion for most patients with biomechanical related diagnoses.  In this way the clinician can determine the extent to which postural collapse may contribute to the patients’ disease and the extent that postural collapse can be corrected with a custom foot orthotic or surgical procedure.

Additional research is needed to determine if the change in LAA can predict the formation of foot deformity and predict the occurrence of overuse injury, plantar fasciitis, and other symptomatic conditions of the foot, ankle, knee, hip and back as well as prevent injury.