Posted on June 30, 2019 | Comments Off on Use of an iPad based in-shoe plantar pressure system in a diabetic orthotic clinic

In diabetes, the ability of the foot to respond to loading experienced during movement is frequently compromised, which may lead to complications including ulceration and amputation. Foot orthoses (FOs) can reduce the incidence of ulceration and amputation, by modifying the loads transmitted to the plantar tissues of the foot. It is recommended that instrumented plantar pressure measurement is used in the prescription and evaluation of FOs, although this may be challenging in clinical practice. This study reports on initial experiences using an iPad based in-shoe plantar pressure measurement system in a diabetic orthotic clinic. Peak plantar pressure (PPP) was measured at regions of interest (ROIs) with prescribed custom FOs, and with 3.2mm polyurethane (Poron) inlays as a baseline comparison. Data was collected for 24 subjects and 32 separate ROIs. Mean baseline PPP was 331.8kPa (range 56.3 – 447.7), mean PPP with FO was 170.4kPa (range 34.8 – 296.0). Mean percentage reduction in PPP was 48.2% (range 10.8 – 81.8%). Use of the system was found to be feasible, although due to time pressures, it was not used with every patient. Results indicate that the custom FOs reduced PPP and the plantar pressure system used was sensitive to these changes. An iPad based in-shoe plantar pressure system may be a useful way to increase the use of instrumented analysis in the clinical prescription and evaluation of FOs in diabetes.

In diabetes the ability of the foot to respond to loading experienced during movement is compromised, which may lead to complications including ulceration and amputation. This is due to factors including neuropathy, arterial disease, deformity, limited joint mobility and changes in plantar tissues [1–5]. Foot orthoses (FOs) can reduce the incidence of ulceration and amputation, by modifying the loads transmitted to the plantar tissues of the foot [6,7]. It is recommended that instrumented plantar pressure measurement is used in the prescription and evaluation of FOs [8], although this is challenging in clinical practice. Clinical use of plantar pressure measurement equipment may increase in feasibility as it becomes more portable and lower in cost. This study reports on initial experiences using an iPad based in-shoe plantar pressure measurement system in a diabetic orthotic clinic.

Inclusion criteria were a diagnosis of diabetes, aged over 18 years. Peak plantar pressure (PPP) was measured using the Pressure Guardian pressure measurement system (Tillges technologies, USA) with an iPad tablet (Apple, USA). The Pressure Guardian system consists of sensors and a small transmitter unit which are attached to the lower limb. An iPad or iPhone application is used to monitor the data (Figure 1). Sensors were applied to ROIs and PPP was measured in two conditions – 1) 3.2mm polyurethane inlay (Grey Poron 4000, Algeos, UK) and 2) custom FOs. Custom FOs were manufactured from an impression of the feet in a foam impression box using a computer aided design and manufacture (CAD-CAM) system (Paromed, Neubeuern, Germany). All FOs were made in ethylene-vinyl acetate (EVA) with a minimum base density of 30 shore A and a maximum base density of 70 shore A. The total thickness of the base of the orthosis ranged from 4mm to 13mm. 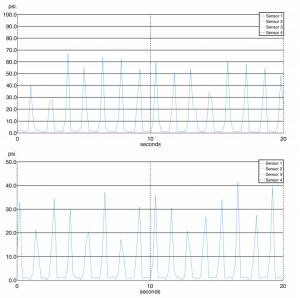 Raised additions such as metatarsal bars were used to increase focal loading. Cut out sections and focal areas of low density material were also used to reduce PPP in focal areas. Soft cover materials were used for many of the orthoses. In many of the orthoses medial or lateral rear foot posting was used. Subjects walked at self selected speed in a straight corridor and wore the same pair of footwear for both conditions. The pressure measurement system was calibrated once at the beginning of each day of use. Calibration, use of poron inlays for a baseline, and other aspects of the described measurement process were all standardised due to the use of a department clinical protocol. The primary endpoint was PPP reduction. The secondary endpoint was the proportion of ROIs above and below proposed danger level of 200kPa [9]. The project protocol was reviewed by the local NHS research governance office and defined as a service evaluation.

Use of the system was found to be feasible in a pressurised NHS clinic environment. Due to time limitations it was not used with every patient, and was typically reserved for aiding decision making and high risk patients. As the system is relatively simple and possible to operate using a tablet or smartphone, it seems likely to involve less clinical burden than more complex systems.

ROIs treated covered the forefoot and midfoot, mainly the 1st metatarsal phalangeal joint (MPJ), 2nd MPJ, and lateral plantar midfoot. There was an apparent trend towards higher baseline PPPs at the forefoot compared to the midfoot (+84kPa) however reductions were comparable in both regions. As this study looked at single ROIs, the interaction between changes in loading at different sites was not explored. For example, might reducing PPP at the forefoot increase PPP in neighbouring sites.

The data indicates positive outcomes in terms of PPP reduction. In the literature different offloading techniques including orthoses, footwear and total contact casts report approximately 20-80% PPP reduction compared to controls [9,10]. Reductions in forefoot pressure of 16-52% is reported with footwear and insoles, compared to control conditions [10]. The mean peak pressure reduction of 48% and range from 11-82% in this study seems in line with these values. The proportion of patients with peak pressure above the proposed dangerous level of 200kPa also decreased from 84% to 31%.

Results indicate that the custom FOs reduced PPP and the plantar pressure system was sensitive to these changes. To date no other results have been published using this system of which the author is aware, which highlights a need for further validation work. In addition to limited existing validation of the pressure measurement system used, data recorded and reported on the orthosis designs used is limited, which is a further weakness of the study. Investigation of orthosis design was not the aim of the study however.

Conflict of interest declaration: At the time of completing this work the author is employed by Opcare, a company providing prosthetic and orthotic care within the NHS. Neither the author or the author’s affiliations have any financial interests in the plantar pressure system described.

This entry was posted in Uncategorized. Bookmark the permalink.