Posted on September 30, 2015 | Comments Off on Distal weightbearing amputation stump for a destructed calcaneal fat pad

Introduction: We present here intractable infections of calcanei which did not respond to a prolonged treatment. Weakness of a gastrocnemius complex pushed us to create a weight bearing stump.
Materials and methods: A case of bilateral insensitive limb requiring amputations, performed for a treatment of a bone infection. A bone – subcutis- skin flap based on tibialis posterior artery was used to cover the distal tibia. One case was fixed by a wire and the other by screws.
Results: Since 2002 and 2005 respectively the amputations are bearing weight.  The K-wire fixation seems to be superior. The technical aspects are discussed. The medial flap seems to be sufficient with no need for a lateral one.
Conclusions: In cases where there is not enough muscle mass, we offer a new technique that allows weight bearing. We found K-wire attachment of the plantar bones superior to screws due to later bone resorption.

In the middle 19th century during the Crimean war on both sides of the battlefield, distal weight bearing amputations were performed. On one side, the Pirogoff method was applied by Pirogoff himself. On the other side, the Syme’s technique was applied by Syme’s pupil. Each one of them was satisfied with his own technique and both techniques exist and are still performed to this day [1].

We were encountered by a case of L2 paraparesis due to a motor-vehicle accident with impaired sensation in both feet, resulting in chronic wounds to the calcanei and ischium, wasting of the calf muscles, and grade 3 strength in the thigh muscles. The patient presented with osteomyelitis of both calcanei and ischium with radiographic evidence of osteomyelitis (Figure 1). He was initially treated with antibiotics and was then presented to our service. We performed a debridement of both calcanei and ischium and excision of pressure sores. Biopsy confirmed osteomyelitis (Figure 2), and bone scan was used to determine extent (Figure 3). After a number of debridement procedures the wound on one side closed while we performed a Gaenslen’s approach on the other side. When that failed, we introduced antibiotics directly to the bone. 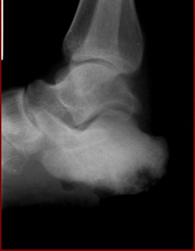 Figure 1 Radiograph of the foot showing osteomyelitis of the calcaneus. 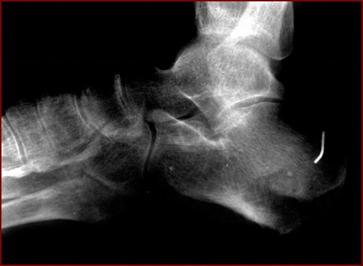 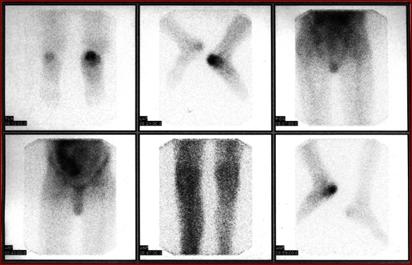 Figure 3 X-ray of the foot after debridement of bony calcaneal infection (top) and Technetium scan showing infection of both calcanei (bottom).

Figure 4 Pre-operative planning of the procedure including skin-flap map.

Upon another failure we were forced to consider amputation in the absence of calf muscle strength (Figure 4). The alternative procedure was patellar weight bearing through knee. The procedure was planned as follows (Figure 5):

The skin incision is made according to preoperative planning (Figure 5). Layered dissection is carried deep to identify the tibialis posterior artery and neurovascular bundle, which are retracted into the instep for protection. The extrinsic flexor tendons in the instep and extensor tendons in front of the ankle joint are identified and divided, and dissection is continued to expose the distal tibia and fibula.

Next, the talus, calcaneus, malleoli, and the upper part of midfoot bones are excised, leaving only a “bucket handle” of the plantar surfaces of the midfoot attached to the posterior tibial flap under the medial skin. The lateral flap can be shortened and excised as needed, the flexors and extensors are to be tied under tension and passed medially to the remnants of the navicular. 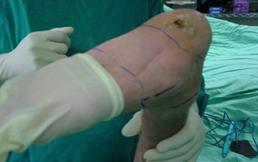 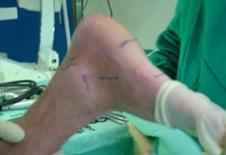 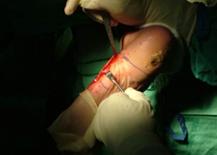 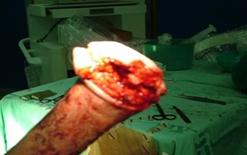 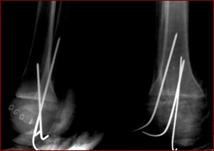 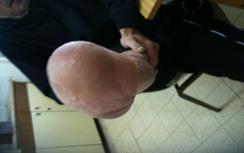 An amputation was performed in the summer of 2002 with a decrease in systemic fever. Eventually there was another episode of acute infection which forced us to approach the ischium, perform a debridement and transfer the short rotators into the ischial body.
Another infectious event resulted from the opposite calcaneus, where a procedure similar to the first one was performed. This time we attached the plantar bones to the tibia by screws, which demanded removal after resorption of part of the plantar bones.

The patient needed an immobilization period of two months after each procedure and was otherwise mobile and functional. 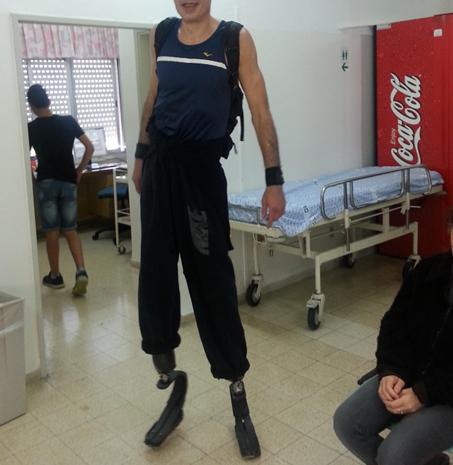 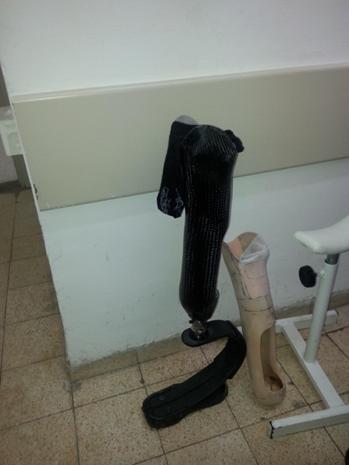 To this day, the patient has been using one stump for ten years and the other stump for thirteen years. The patient wears two prostheses but is able to perform a short walk with bare feet. He uses custom made prostheses since he has a bulky stump and since he requested a special light weight carbon composite design (Figure 6). Despite his paraparesis he is able to walk up to 12km distance and swim.

Amputation in absence of calf muscles and unusable complex of calcaneum and fat-pad forces us either to perform a more proximal amputation or use plantar bones and mid-foot fat-pad based on tibialis posterior artery and nerve.

Conclusions: In cases where there is not enough muscle mass, we offer a new technique that allows weight bearing. We found K-wire attachment of the plantar bones superior to screws due to later bone resorption.