Desmoplastic fibroma of bone: Case report and review of the literature

Posted on June 30, 2015 | Comments Off on Desmoplastic fibroma of bone: Case report and review of the literature

This is a case report on an unusual presentation of desmoplastic fibroma of bone. We feel that this presentation should be documented and reviewed in comparison to the available literature, as this tumor is seldom documented in the foot. We review the differential diagnosis, pertinent imagine findings, and surgical management of this pathology.

Desmoplastic fibroma of bone is a benign, locally aggressive tumor with varied recurrence rates found in the literature. Desmoplastic fibroma of bone, when found in the foot, is an exceedingly rare occurrence [1]. Jaffe first described it as a benign tumor characterized by the formation of abundant collagen fibers by the tumor cells. The tissue is described as being poorly cellular with nuclei that are ovoid or elongated. The incidence of whole-body desmoplastic fibroma is less than 0.1% [1,2]. The most common presenting symptom is pain and/or swelling, although pathologic fracture has been described previously as a common reason for seeking treatment. This tumor has also presented as an incidental finding [2]. The most common differential diagnosis radiographically is fibrosarcoma, however a wide variety of entities can masquerade as a desmoplastic fibroma including fibrous dysplasia, giant cell tumor, unicameral bone cyst, chondromyxoid fibroma, nonossifying fibroma, periosteal desmoids, eosinophilic granuloma, low-grade intraosseous osteosarcoma, adamantinoma, as well as distant metastasis [1-4].

This tumor has been described in patients ranging from 15 months to 75 years of age, and it is most commonly seen in the mandible, femur, pelvis, radius, and tibia [4].

A 75-year-old male patient presents with the complaint of pain in the first metatarsal region. He states he had been having pain, which has been getting progressively worse for the past several months. On physical exam, there was edema in the right first ray region extending to the proximal foot and into the right leg.  There was exquisite pain to palpation dorsally along the entire course of the first metatarsal. 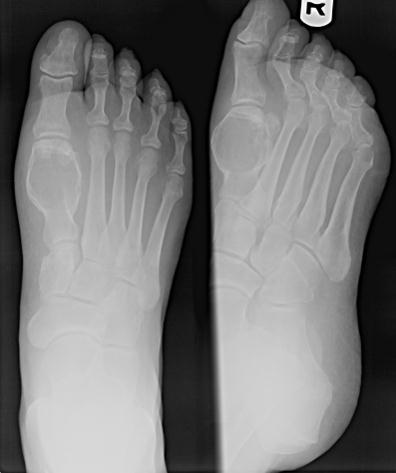 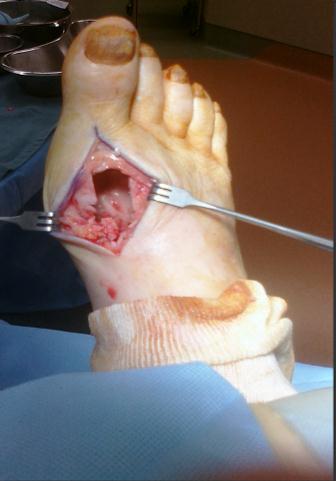 A visible deformity and limited, painful range of motion of the 1st MTPJ was noted. Clinical examination was consistent with hallux abductovalgus with associated dorsal exostosis. Radiographs displayed an expansile, lytic lesion at the distal diaphysis extending in to the metaphysis/epiphysis. MRI showed a small cortical break in the distal segment of the lesion. Our main concern at the time of discovery was aggressiveness of this lesion. Bone scan and chest x-ray revealed no other lesions in the body. At this point, biopsy was elected to determine the nature and aggressiveness of the lesion.

Intraoperatively, a linear incision was made along the first metatarsal and deepened to the deep fascial layer where a capsular-periosteal incision was made. There was gross deformity of the first metatarsal head as well as deformity extending to the midshaft of the aforementioned bone. The specimen measured 1.5 cm X 1.2 cm X 0.3 cm. The most proximal aspect of the first metatarsal base was the only unaffected portion of the bone. The mass was removed by excising a rectangular window with the tumor housed inside. The tumor was very soft and, upon removal, it was made certain to excise normal margins on all sides of the tumor (Figure 3).  The mass was sent to the pathologist intraoperatively where it was confirmed a benign mass. At this point, the remaining void was curetted to ensure adequate removal of tumor, flushed, and finally packed with a mixture of putty and cancellous bone chips. The dorsal cortical window was replaced and the wound was closed in layers. The pathology report returned with the diagnosis of desmoplastic fibroma. The characteristics of this particular tumor were a bland spindle cell appearance and lack of woven bone formation. The lesion was, however, negative for beta-catenin. 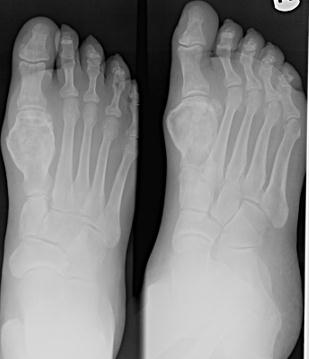 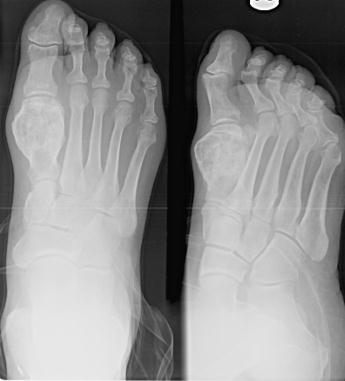 Desmoplastic fibroma of bone, although considered benign, can be a debilitating condition leading to loss of limb [1-7]. Pathologic elements of this tumor include fibroblasts, collagen fibers, and elongated nuclei. These tumors begin inside the medullary canal and expand outward at which time it is possible to breach the cortex and invade adjacent tissues [3]. There have been isolated reports of associated osseous sarcomas arising in the areas of these tumors [4-8]. Bohm et al found a 50% recurrence rate with 25% of those leading to amputation in the extremities. The treatment of choice when confronted with this clinical and x-ray picture is bone biopsy, wide excision, and bone grafting [3,7].  Recurrent lesions can lead to selective amputation. Considering this bone tumor’s relative infrequency, we hope this case report provides guidance in treatment for the foot and ankle surgeon who may be confronted with this entity.

Comments Off on Desmoplastic fibroma of bone: Case report and review of the literature