Surgical excision of Morton’s neuroma: Does it provide a reliable outcome?

Posted on June 30, 2019 | Comments Off on Surgical excision of Morton’s neuroma: Does it provide a reliable outcome?

This study involves a retrospective analysis of the surgical intervention for treatment of Morton’s neuroma of the foot for patients that were treated over three years period. The aim of this study is to evaluate the long-term outcome following operative removal of the Morton’s neuroma of foot using MOXFQ. We retrospectively evaluated the outcome of 13 patients (14 feet) who were operated from February 2015 to March 2018 for excision of Morton’s neuroma using a dorsal approach. We evaluated the outcome was using clinical follow up notes, examination findings and the Manchester Oxford Foot Questionnaire score. Thirteen patients (14 feet) were operated during this period, out of which 12 were females and one male with a mean age of 58 years. One patient had bilateral symptomatic disease. 11 out of 13 patients (84.6 %) were satisfied with their results of surgery after a mean follow-up period of 34.42 ± 9.81 months. Biopsy supported the clinical diagnosis in 13/14 case (92.857%). Preoperative diagnosis was confirmed by radiologist as Morton’s neuroma on 12/14 cases (85.71%). The predominant modality of choice was ultrasound of feet, however, MRI of the foot was advised in one case only. Statistically significant difference was appreciated between preoperative and postoperative MOXFQ score (41.92 ± 10.47 verses 8± 15.11), respectively, with a p value < 0.0001 CI 95% SI 4.913. Our study shows surgical excision of Morton’s neuroma is a reliable procedure and it gives a good outcome and it is maintained over a period of 3 years.

Morton’s neuroma is non-malignant enlargement of the common plantar digital nerve, usually seen at the 2nd or 3rd intermetatarsal spaces [1,2]. It is one of the most common causes of metatarsalgia and majority of clinicians consider the clinical diagnosis as an indication to treatment [3]. Morton’s neuroma should be considered as part of differential diagnosis in any patient complaining of forefoot pain [5]. The most common presenting complaint is burning pain on the plantar aspect of the foot between the metatarsal heads of corresponding toes [3]. Others complain of walking on a lump on the ball of the great toe, shooting pain and tingling in the involved digits [5]. Pain is particularly aggravated by walking and wearing tight shoes and is relieved by rest [3]. Researchers were not able to identify the definitive cause of this condition. Some consider it due to hypermobility of 4th ray over the cuboid as part of the etiology, explaining why the third metatarsal space is commonly associated with the disease [3].

It may also be due to entrapment of nerve at the distal metatarsal ligament or may be due to trauma, equinus deformity or autonomic neuropathy [5]. Considering the variable presentation of patient symptoms, the modality of choice and surgical approach is also subjected to active debate over the years. Surgery is considered the treatment of choice with either dorsal or plantar approach. However, few consider equal efficacy of either dorsal or plantar approach for excision [7]. Others considered dorsal approach only in cases of recurrent disease [8].

Some advocate conservative treatment as part of regimen. However, it is associated with variable success rate and many patients ultimately underwent surgery after initial period of successful non-surgical management. Moreover, the role of corticosteroids with local anesthetic is also considered futile in long term follow-up [1] (6 months).

The use of histology was considered as an essential part of postoperative work-up for consideration of the diagnosis, however, others considered it as an economic burden unless it is a recurrent disease or ambiguity regarding diagnosis during surgery [5].

We retrospectively evaluated our thirteen cases (fourteen feet) from 2015 to 2018 and the postoperative outcome was evaluated using Manchester Oxford Foot and Ankle Questionnaire. All patients with neuroma were considered for the study. Any patient with recurrent disease, diagnosed case of other foot pathology like rheumatoid arthritis, associated injuries in the metatarsophalangeal joint, any patient operated for recurrent disease or not willing to answer the questionnaire over the phone were excluded from the study. In order to avoid any bias during study we evaluated the patient outcome following surgery not only through clinical notes, radiology reports (USG/ MRI) histopathology but also used operative summaries. Moreover, additional information was extracted by ringing the patients using their documented contact numbers and after taking verbal consent we asked question as in MOXFQ, thus cross checking the information provided in the post-operative follow up pathway in terms of patient satisfaction/ dissatisfaction status. 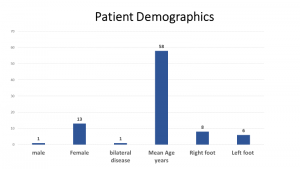 The results were evaluated by calculating the mean, standard deviation, standard error for values obtained. For evaluation whether the pre and post-operative MOXFQ score is statistically significant we calculated the p value using the mean values of pre and post-operative MOXFQ score.  P value <0.05 was considered as significant.

Biopsy supported the clinical diagnosis in 13/14 cases (92.85%). Preoperative diagnosis was confirmed by radiologist as Morton’s neuroma on 12/14 cases (85.71%). The predominant modality of choice was ultrasound of feet (Figure 3). 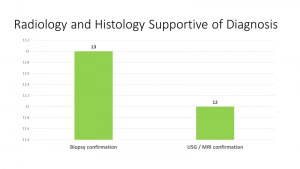 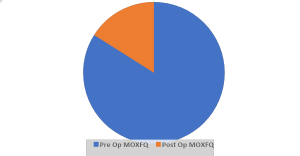 However, MRI foot was advised in one case only. Conservative treatment was opted by 5/14 patients (35%). Out of these one was offered injection of local anesthetic with corticosteroid in clinic and 4/14 (28.5%) were given ultrasound guided injection of local anesthetic with steroid. However, the mean relief period was 1.22± 2.2 months for all 5 patients and they ultimately opted for surgery (Figure 2). Statistically significant difference was appreciated between pre-operative and post-operative MOXFQ score (41.92 ± 10.47 Verses 8± 15.11) respectively with p value < 0.0001 CI 95% SI 4.913 (Figure 4).

Our results showed a patient satisfaction rate of 84.6%, which is higher than the documented success rate of surgery. It is variably reported in literature however, it never exceeds 80% [1]. Some researchers have raised concerns regarding the use of dorsal approach for surgery compared to the plantar approach, but our results do not support this argument. In fact, we were able to treat our patient with satisfactory results using a dorsal approach.

The literature supports the use of dorsal approach as it provides good exposure, less healing problems and good exposure of deep metatarsal transverse ligament. Moreover, there was a significant delay in full-weight bearing for the plantar incision and increased risk of wound healing problems [3]. Another study demonstrating the efficacy of plantar approach claiming a complication rate of 4 to 36% for plantar approach compared to 2 to 34% for dorsal approach [6]. Another group of researchers claim that equal satisfactory results can be obtained from either a plantar or dorsal approach and choice should be left for surgeon experience and personal preference [7]. Similarly, some surgeons prefer using a planter approach for recurrent disease, as surgery can be complicated by scar tissue if the neuroma is approached through the site of a previous incision [8].

In our case series, the predominant affected population were females with a mean age of 58 years. Again, this finding matches with already established research, as women in the middle ages are prone to disease with an average age of 50 years and female-to-male ratio of 4:1[3].

In this series, we offered conservative treatment in every case before moving towards surgery. Five out of 14 patients accepted the offer and went for ultrasound guided injection and one opted the option of blind injection in the foot by clinician. Although, some support the use of ultrasound guided injection, other prefer identification of pain spot in the clinic and infiltration of local anesthetic and steroid at the most tender point claiming favorable/comparable results with blind injection [1].

In our case series, the results of conservative management using local anesthetic and steroid were disappointing with a mean relief of just 1.22 ± months and all patients ultimately opted to go for surgery.

This finding is very much coherent with existing evidence as all patients managed conservatively for Morton’s neuroma ultimately opted for surgery as long-term results are usually disappointing [2]. Based on our experience, we don’t recommend the use of steroid and local anesthetic as a definitive treatment of choice for Morton’s neuroma unless the patient is deemed unfit for surgery. Despite the evolution of less invasive modalities and development in radiological techniques, most of the existing literature still favors surgery as a definitive treatment of this disease [4].

Our set of patients diagnosis is supported by tissue diagnosis of neuroma in 13/14 (92%) cases thus consolidating our clinical assessment. This is much higher than the reported value in one study involving the prospective analysis of Morton’s neuroma disease of the foot where they were able to prove the histological diagnosis in only 78% of operated patients [2]. Moreover, the exceptional results in terms of resolution of symptoms also points toward correct treatment regimen.

Regarding tissue diagnosis, it has been considered as a burden to the health system by some researchers. The reason extracted from the literature narrated the fact that unless there is doubt during surgery it should not be subjected to tissue diagnosis [9]. However, others always give weightage to radiological and histological diagnosis. Few consider the clinical examination as the gold standard for diagnosis [4]. However, others have questioned this technique in modern era of evidence-based medicine [3].

We recommend the support of histology, even if the clinician is sure of diagnosis. Not only does it save any future discomfort in terms of medicolegal issues, but it also excludes an important cause of forefoot pain for future treatment in case the results of surgery are disappointing. Additionally, patients can be counselled regarding the management and guarded prognosis in case of recurrent disease [2].

The modality of choice in our series was ultrasound of foot. Although MRI was requested by clinician in one case only, but it did not add any extra information or change in treatment plan for the patient. Researchers recommend use of both modalities, however, the diagnosis of asymptomatic neuroma is high, especially with ultrasound and it is reported as 54% in some literature. Thus, clinical findings should be correlated with radiological evidence [2]. MRI has sensitivity and specificity of 93% and 68% respectively compared to ultrasound which has sensitivity and specificity of 90% and 88% respectively [3].

In our opinion, long term follow-up is vital for this disease, as in our experience initially satisfied patients may complain of return of symptoms after a mean interval of three months with complaint of pain of similar nature that was experienced before the surgery.

In our experience, we would recommend reconsidering the diagnosis if it is not proven by radiological work up as it may be one of the factors that can lead to poor outcome after surgery. Although evidence regarding this recommendation is weak in existing literature [2]. Surgical excision of Morton’s neuroma can give excellent outcome after surgery provided patients are chosen wisely.

Comments Off on Surgical excision of Morton’s neuroma: Does it provide a reliable outcome?