Posted on April 30, 2018 | Comments Off on Conservative surgical management in an extreme diabetic foot case

Diabetes mellitus is one of the most prevalent diseases worldwide and an important cause of morbidity and mortality. Of relevance, due to its complicated management, morbidity and cost associated, is the diabetic foot. Here we present a case of a 51 year-old male diagnosed with  long-standing decompensated Diabetes mellitus with a 2 year history of a foot ulcer. After debridement of the ulcer, preservation of the bony structure was achieved by covering it with a fillet flap. The therapeutic management in patients with advanced diabetic foot should be individualized based on patient characteristics. Oftentimes, conservative amputations entail the need of complex surgical techniques, however, it allows the patient to retain their independence and an improved quality of life.

Diabetes mellitus (DM) is one of the most common diseases worldwide with a global prevalence of 8.5%, and increasing every year. Sustained hyperglycemia derives in numerous complications, mostly caused by macro and microangiopathy [1], of special importance are Diabetic Foot Ulcers (DFUs).

Diabetic Foot Ulcers represent an important healthcare issue due to the elevated morbidity, complexity of its management and elevated costs associated with this disease [2]. DFUs have a global prevalence of 6.3% and have a higher prevalence in DM type 2 and male patients [3]. Neuropathy is the most important risk factor for the development of DFUs. Moreover, the addition of different factors such as the of loss of skin integrity, existence of foot deformities (Hallux Valgus, Charcot’s arthropathy, etc.), and peripheral vascular disease ultimately lead to the formation of DFUs [4].

The course of healing the DFU is arduous due to the impaired cicatrization and granulation processes in these patients, which is frequently complicated with superimposed infections.  Some cases, especially when osteomyelitis is present, require limb amputation as the sole therapeutic option. However, it is imperative to remain as conservative as possible, since amputations suppose a great psychological and functional impact that can pose a decrease in quality of life.

Here we present a case of a patient with a complicated DFU that was managed with conservative surgical treatment without undergoing amputation.

A 51 year old male was first evaluated in the outpatient setting for a 1-year history of a DFU on the right foot. His medical history included a atrial fibrillation, dyslipidemia, hypertension, and a poorly controlled insulin-dependent DM with development of retinopathy, nephropathy and cardiac disease. The patient was also an active smoker with over 30 years of smoking history. A transmetatarsal amputation from the 2nd to the 5th toes on the right foot was previously carried out in a different hospital due to inadequate healing of a DFU. The surgical wound was complicated with a dehiscence, which remained as an ulcer that impeded the patient from ambulating.

The physical examination showed a lateral subluxation of the first metatarsophalangeal joint, an ulcer on the amputation stump, with granulation on the base and no inflammatory signs, proliferative signs, dermatosclerosis or hyperpigmentation of the skin edges (Figure 1). Additionally, the patient presented signs of chronic venous insufficiency, hence the induration hindered lower limb distal pulse examination. Plantar protective sensation was severely diminished.

An MRI was performed, which showed findings suggestive of osteomyelitis of the remnants of the 3rd, 4th and 5th toe, the anterior portion of the cuboid bone, and the navicular bone of the right foot. These findings were later confirmed with a gamma scan. The CTA scan showed bilateral permeability of the aortoiliac, femoropopliteal, and distal infrapopliteal trunks.

Given these findings a new surgical approach was conducted, with resection of the remnants of the 2nd to 5th toes, cuboid bone, cuneiform bones, as well as the anterior portion of the navicular bone (Figure 2), a fillet flap from the hallucis and the plantar skin was performed to provide coverage of the cutaneous defect (Figure 3).

The pathology report indicated the presence of a verrucous squamous cell carcinoma. However, no infiltrative component was seen in the specimen and the margins were disease free. 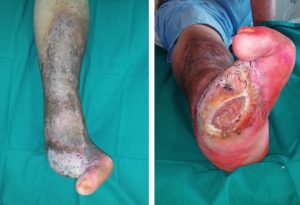 Figure 1 A 51 year old male with a lateral luxation of the metatarsophalangeal joint of the hallucis (Left). Ulcer presence on the amputation stump (Right). Frontal (Left) and plantar (Right) view. 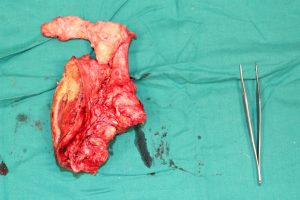 Figure 2 Surgical excision of the remnants of the 2nd to 5th toes, cuboid bone, cuneiform bones, as well as the anterior portion of the navicular bone.

The postoperative course was uneventful with a favorable healing towards the resolution of the surgical wound, which was supported by a tight glucose control and a smoking cessation program. Two months after the intervention the patient has a healthy-appearing stump that allows ambulation (Figure 4). 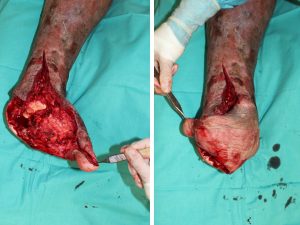 Figure 3 Foot defect after resection (Left). Coverage with a fillet flap from the hallucis and the plantar skin (Right). 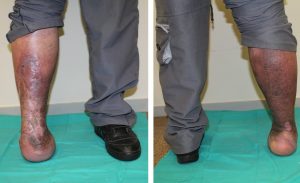 The course of DFUs is usually difficult owing to a deficient granulation and cicatrization, and commonly complicated with superimposed infections. DFUs that persist over time can sometimes lead to malignant transformation; most frequently squamous cell carcinoma [5]. All of these result in wide surgical excisions and, sometimes inevitably amputations.

Numerous studies support the need to be as surgically conservative as possible, with limb conservation procedures, since energetic output is increased progressively as an amputation becomes more proximal [9]. Moreover, several patients present with several comorbidities, as in the case presented, and are non-candidates for rehabilitation after major amputations. Hence, preservation of the majority of the limb with partial minor amputations can result in an improved functional status [10]. Likewise, minor amputations may confer the possibility to ambulate for short distances without the need of prosthesis, allowing the patient to perform many daily-living activities, and thus, having a major impact on quality of life [8].  In some cases, in order to achieve minor amputations, the complexity of the surgical techniques is considerably higher and are often unconventional procedures that surgeons might not be familiarized with. In the case presented, due to patient conditions, impaired sensibility, presence of osteomyelitis, and the condition of the foot soft tissues, initially the decision was to perform a major amputation. Nevertheless, the scarce possibilities for adaptation to a prosthetic device and ambulation after amputation, a more conservative approach was planned. Therefore, preservation of the non-osteomyelitic bone and coverage of the skin defect with an adipocutaneous fillet flap from the hallux and the plantar surface provided a stable coverage without any added morbidity.

The fillet flap is well described in the literature as an alternative for large defects that require coverage without sacrificing the length of the extremity [11].  It provides superb mechanical stability plus an added quasi-normal sensitivity to the stump. Additionally, utilizing plantar tissue also provides an excellent, and long-lasting, surface for the stump [12].

Diabetic patients with DFUs should undergo individualized treatment based on their characteristics. In certain cases, a more conservative amputation, despite being more technically challenging, allows the patient to have a better quality of life as well as more independence.

No conflict of interest to disclose.