Effects of foot orthoses on patellofemoral load in recreational runners

Posted on June 30, 2015 | Comments Off on Effects of foot orthoses on patellofemoral load in recreational runners

D
istance running has been shown to be physiologically beneficial [1]. However despite this, research examining the incidence of running injuries indicates that chronic pathologies are a prominent complaint for both recreational and competitive runners [2], with an incidence rate of around 70% during the course of a year [3].

The most common chronic injury in recreational runners is patellofemoral pain, which is characterized by pain linked to the contact of the posterior surface of the patella with the femur during dynamic activities [4].

Despite the potential efficacy of foot orthoses in the prevention/treatment of patellofemoral pain symptoms, there is a paucity of research investigating any potential alterations in loading at this joint that may be mediated through orthotic intervention. The aim of the current investigation was therefore to determine whether foot orthoses reduce the loads experienced by the patellofemoral joint during the stance phase of running. This study tests the hypothesis that orthoses will reduce patellofemoral load during running.

Fifteen male participants (Age 25.76 ± 5.21 years; height 1.74 ± 0.06 m; mass 71.15 ± 4.84 kg) took part in the current study. Participants were all recreational runners who engaged in training at least three times per week. Ethical approval for this project was obtained from the University and each participant provided informed consent in written form in accordance with the declaration of Helsinki.

Commercially available orthotics (Sorbothane, shock stopper sorbo Pro; Nottinghamshire UK) were examined in the current investigation. Although the right side was selected for analysis orthotic devices were placed inside both shoes.

Participants completed five trials running at 4.0 m·s-1 with and without orthotics. The order in which participants ran in each condition was counterbalanced. Participants ran over an embedded piezoelectric force platform (Kistler Instruments, Model 9281CA) operating at 1000 Hz [11]. Running velocity was controlled using infrared timing gates (SmartSpeed Ltd UK). A deviation of ±5% from the pre-determined velocity was allowed. Participants struck the force platform with their right (dominant) limb and five trials were obtained from each footwear condition. Three-dimensional (3-D) kinematics and ground reaction forces data were collected synchronously. The stance phase was defined as the duration over which >20 N of vertical force was applied to the force platform [12]. Kinematic information was obtained using an eight camera optoelectric motion capture system (Qualisys Medical AB, Goteburg, Sweden) using a capture frequency of 250 Hz. Dynamic calibration of the motion capture system was conducted prior to data collection.

The current investigation used the calibrated anatomical systems technique (CAST) to model the lower extremity segments in six degrees of freedom [13]. To define the anatomical frame of the right shank and thigh, retroreflective markers were positioned unilaterally to the medial and lateral malleoli, medial and lateral epicondyle of the femur and greater trochanter. Rigid technical tracking clusters were positioned on the shank and thigh segments. Static trials were conducted in order for the positions of the anatomical markers to be referenced in relation to the tracking markers/clusters, following which those not required for tracking were removed.

A previously utilized algorithm was used to quantify PTCF and PTCP [14]. This method has been utilized previously to resolve differences in PTCF and PTCP when using different footwear [15,16,17] and between those with and without patellofemoral pain [18]. PTCF (B.W) was estimated using knee flexion angle (KFA) and knee extensor moment (KEM) through the biomechanical model of Ho et al [19]. The moment arm of the quadriceps (QMA) was calculated as a function of KFA using a non-linear equation, based on cadaveric information presented by van Eijden et al. [20]:

Quadriceps force (FQ) was calculated using the below formula:

PTCF was estimated using the FQ and a constant (C):

The C was described in relation to KFA using the equation described by van Eijden et al. [20]:

PTCF loading rate (B.W/s) was also calculated as a function of the change in PTFC from initial contact to peak force divided by the time to peak force.

The data were tested for normality using a Shapiro-Wilk test which confirmed that the data were suitable for parametric testing. Means and standard deviations were calculated for each running condition. Differences in the outcome 3D kinematic parameters were examined using paired samples t-tests. The alpha level required for statistical significance was adjusted to p≤0.008 based on the number of comparisons being made. Effect sizes for all significant observations were calculated using a Cohen’s D statistic. All statistical analyses were conducted using SPSS v21.0 (SPSS Inc, Chicago, USA). 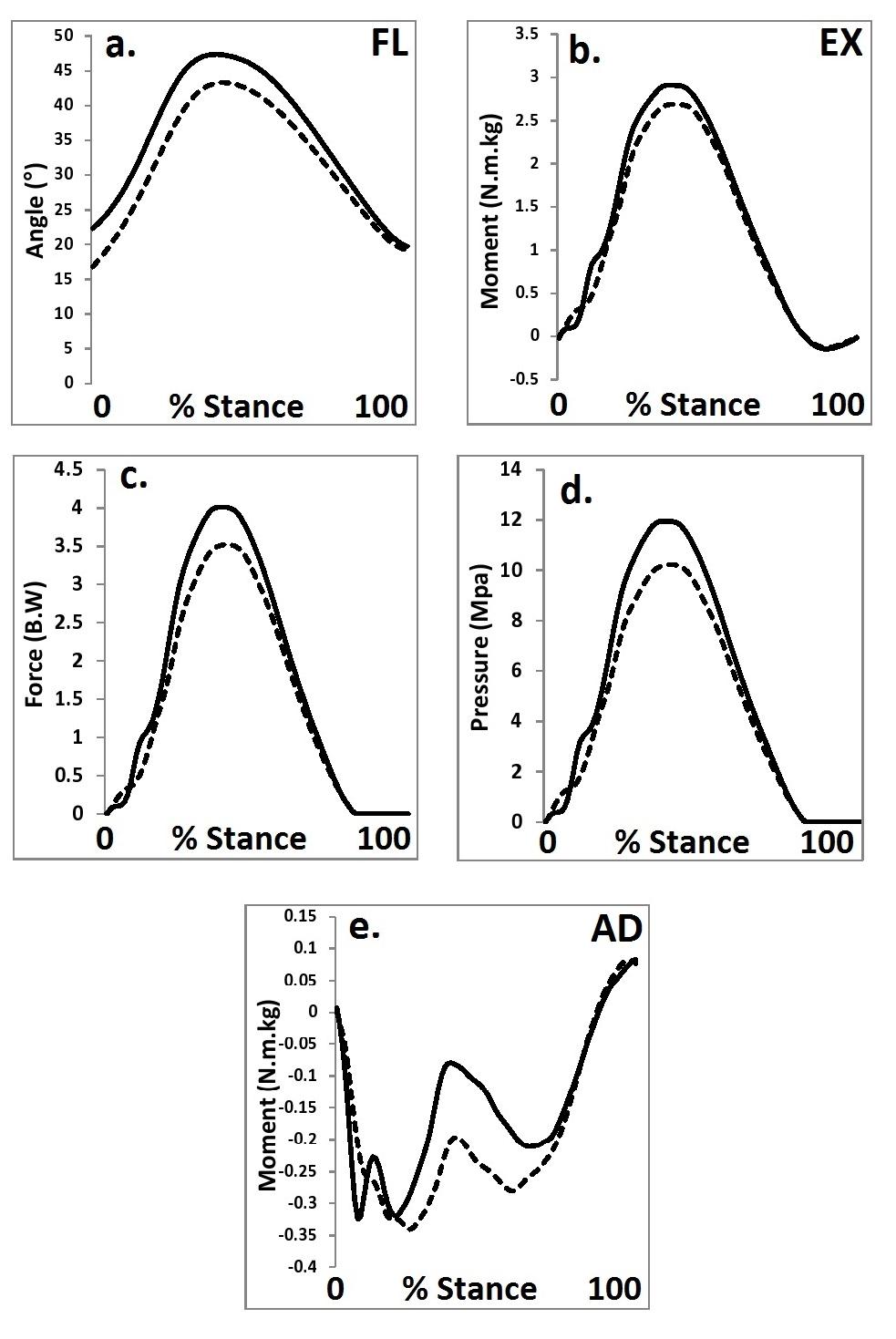 This study aimed to determine whether foot orthoses reduce the loads experienced by the patellofemoral joint during the stance phase of running. Previous analyses have examined the efficacy of orthotic devices in the treatment of patellofemoral disorders, but this represents the first investigation to examine the effects of orthotic devices on the loads experienced by the joint itself.

In support of our hypothesis, the key observation from the current investigation is that patellofemoral load parameters were significantly reduced with the presence of orthotic intervention when compared to running without orthotic inserts. This finding may have relevance clinically and serve to provide further insight into the mechanisms by which foot orthoses serve to attenuate the symptoms of patellofemoral pain Ho et al. [19]. The aetiology and pathogenesis of patellofemoral disorders are a function of habitual and excessive loads experienced by the patellofemoral joint itself, which could account for the high incidence of patellofemoral disorders in runners. This current investigation shows that using foot orthoses may be a potential mechanism by which runners are able to attenuate their risk of injury through reductions in knee joint loading.

It is hypothesized that the reductions in patellofemoral kinetics observed in the current study are linked to the additional midsole cushioning associated with the orthotic device. When running with increased midsole cushioning runners typically utilize reduced knee flexion angle at footstrike and throughout the stance phase (Figure 1a). Reductions in knee flexion are associated with lengthening of the quadriceps moment arm, which serves to reduce the load experienced by the patellofemoral joint as PTFC and PTCP are governed by the force generated in the quadriceps [19].

The authors wish to thank Robert Graydon for his technical assistance during data collection.