Posted on December 31, 2014 | Comments Off on Multi-segment foot kinematics and plantar fascia strain during treadmill and overground running.

Although physiologically beneficial, running is known to be associated with a high incidence of chronic injuries. Excessive coronal and transverse plane motions of the foot segments and strain experienced by the plantar fascia are linked to the development of a number of chronic injuries. This study examined differences in multi-segment foot kinematics and plantar fascia strain during treadmill and overground running. Twelve male recreational runners ran at 4.0 m.s-1 in both treadmill and overground conditions. Multi-segment foot kinematics and plantar fascia strain were measured using an eight-camera motion analysis system and contrasted using paired samples t-tests. The results showed that plantar fascia strain was significantly greater in the overground condition (8.23 ± 2.77) compared to the treadmill (5.53 ± 2.25). Given the proposed relationship between excessive plantar fascia strain and the etiology of injury, overground running may be associated with a higher incidence of injury although further work is necessary before causation can be confirmed.

Running using the treadmill is now a common exercise modality [1]. Recent statistics provided by runners’ world indicate that in excess of 40 million people in the US perform their running training using a treadmill. Treadmills are also useful to researchers interested in the mechanics of human gait as they allow locomotion velocity and gradient to be controlled in a controlled environment [2]. The treadmill also allows a greater number of continuous gait cycles to be captured and may thus allow more natural movement patterns to be obtained [3].

Recreational running is associated with a number of physiological benefits [4]. However, etiological analyses which have studied the prevalence of running injuries indicate that chronic injuries are extremely common, with an incidence rate of around 70 % during the course of a year [5]. A large number of retrospective and prospective analyses have investigated the mechanisms by which chronic running injuries develop [6,7,8]. Mal-alignment of the foot segment has been linked to etiology of chronic pathologies [9]. Excessive coronal and transverse plane motions of the foot segments have been associated with the progression of various pathologies such as tibial stress syndrome and anterior knee pain [10]. In addition to this, abnormal foot mechanics have also been linked to the etiology of plantar fasciitis, which affects in access of 10% or recreational runners [11].

It is currently unknown whether using the treadmill for training, compared to traditional overground running, influences runners’ susceptibility to chronic injuries. Research investigating the differences in running mechanics has habitually used a single segment foot model, thus the current understanding regarding articulations of the foot segments, linked to the potential etiology of injuries during treadmill and overground running is limited. Differences between treadmill and overground running have been examined previously in walking studies using multi-segment foot models.    Tulchin et al., [12] observed small differences in rearfoot plantarflexion during first rocker, as well as peak forefoot eversion and abduction, although all differences were <3°. These results led to the conclusion that multi-segment foot mechanics were similar between overground and treadmill walking in healthy adults.

Given the popularity of the treadmill as an exercise and research tool there has been no published information regarding the differences in multi-segment foot kinematics and plantar fascia strain during overground and treadmill running. Therefore, the aim of the current investigation was to determine whether differences exist between running on the treadmill and overground in multi-segment foot mechanics and also the strain imposed on the plantar fascia.

Twelve experienced runners took part in the current investigation. All were free from musculoskeletal pathology at the time of data collection and provided written informed consent. The mean characteristics of the participants were: Age = 24.11 ± 1.35 years, Height = 1.74 ± 0.08 m, Mass = 69.16 ± 5.67 kg. The procedure utilized for this investigation was approved by the University of Central Lancashire, ethical committee.

Kinematic information during overground and treadmill locomotion was captured at 250 Hz via an eight-camera motion analysis system (QualisysTM Medical AB, Goteburg, Sweden). Two identical motion capture systems were used. Calibration of each system was performed before each data collection session. Calibrations producing residuals <0.85 mm and points above 4000 in all cameras were considered acceptable.

In order to model the foot segments in six degrees of freedom the calibrated anatomical systems technique was utilized for modelling and tracking segments was [13]. Circular retroreflective markers (19 mm) were placed onto specific anatomical landmarks in accordance with the foot model developed by Leardini et al., [14]. This allowed the anatomical and technical frames of the rearfoot (Rear), midfoot (Mid) and forefoot (Fore) to be delineated. To define the tibial (Tib) segment additional markers were positioned onto the medial and lateral femoral epicondyles. A rigid carbon-fibre tracking cluster consisting of four non-linear markers was also positioned onto this segment. All participants were provided with the same experimental footwear (Asics 2160; Asics UK).

In the overground condition, five trials were undertaken over a 22 m walkway (Altrosports 6mm, Altro Ltd) at a velocity of 4.0m.s-1 ±5%. The velocity of running was quantified using infra-red timing gates (SmartSpeed Ltd UK). To collect treadmill data a WoodwayTM (ELG, Germany) treadmill was utilized. Participants were allowed a habitation period of 5-min, during which they ran at the required experimental velocity prior to data collection. Five trials were also collected for the treadmill locomotion. As force information was not available from the treadmill, footstrike and toe-off were determined in both conditions using kinematic information. Based on the recommendations of Fellin et al., [15], footstrike was determined as the point at which the vertical velocity of the calcaneus marker changed from negative to positive and toe-off was delineated using the second instance of peak knee extension.

Data were digitized using Qualisys track manager and exported to Visual 3D (C-motion, Germantown USA). Marker trajectories were smoothed at 15 Hz using a low pass non-phase shift Butterworth filter. This frequency was selected based on residual analysis [16]. Cardan angles were used to calculate 3-D articulations of the foot segments. Foot angles were calculated using and XYZ cardan sequence of rotations between the calcaneus-tibia (Cal-Tib), midfoot-calcaneus (Mid-Cal), forefoot-midfoot (For-Mid) and forefoot-calcaneus (For-Rear). Discrete 3-D kinematic parameters that were extracted for statistical analysis were 1) angle at footstrike, 2) angle at toe-off, 3) range of motion from footstrike to toe-off during stance, 4) peak angle during stance and 5) relative range of motion (representing the angular displacement from footstrike to peak angle). Plantar fascia strain was quantified in accordance with the Ferber et al., [17] recommendations by determining the distance between the 1st metatarsal and calcaneus markers and calculated as the relative position of the markers was altered. Plantar fascia strain was calculated as the peak change in length during the stance phase divided by the original length. 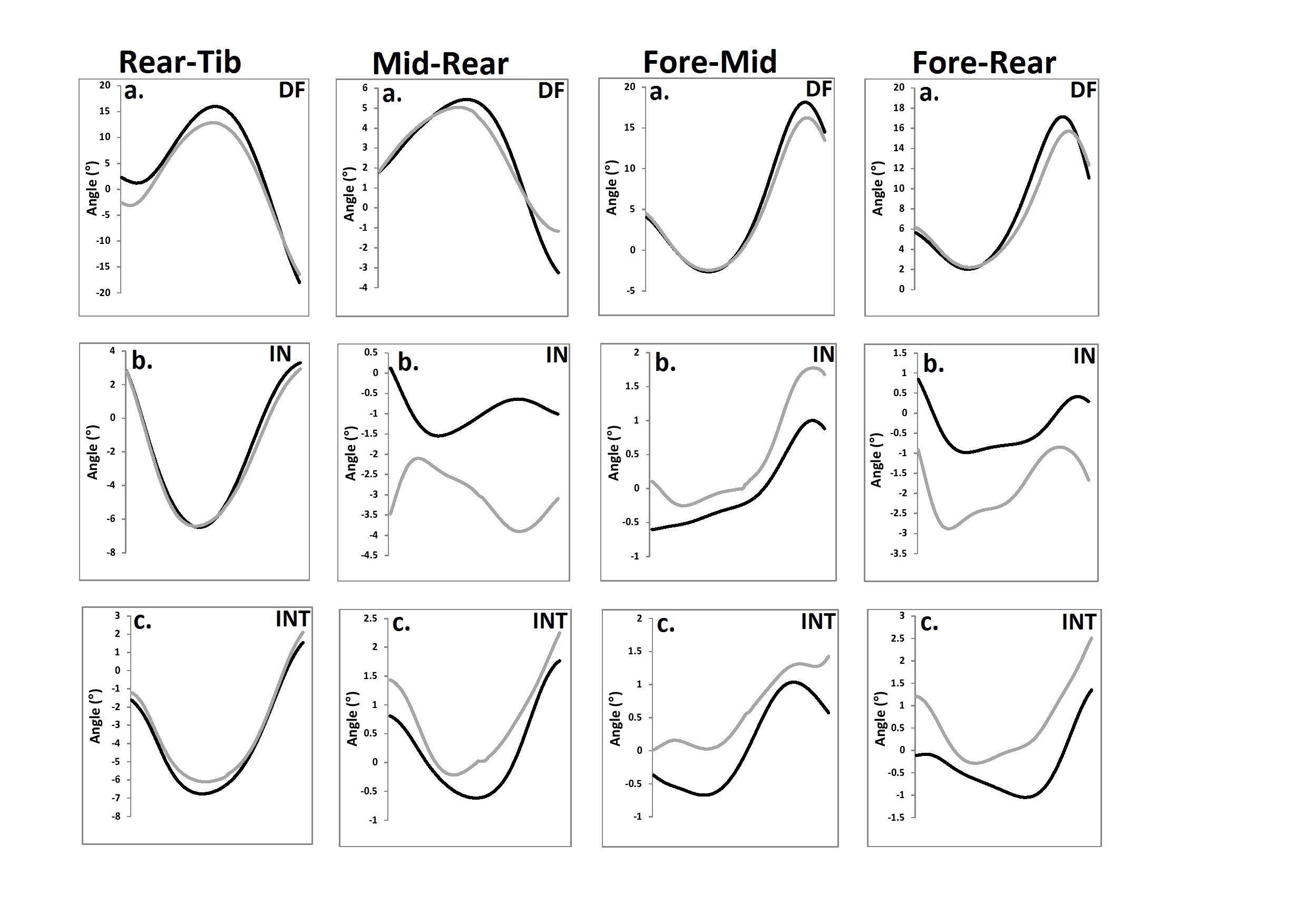 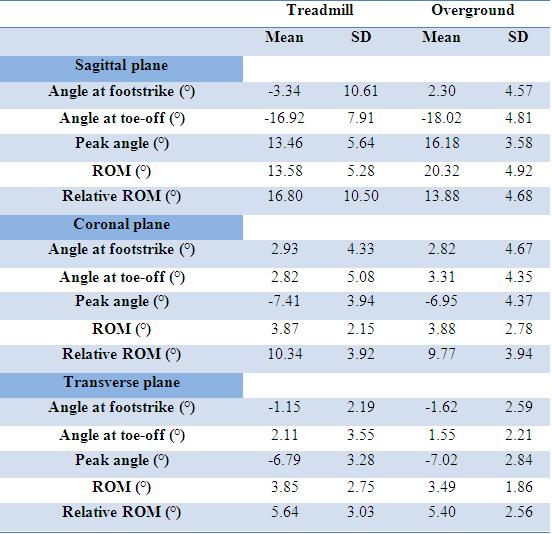 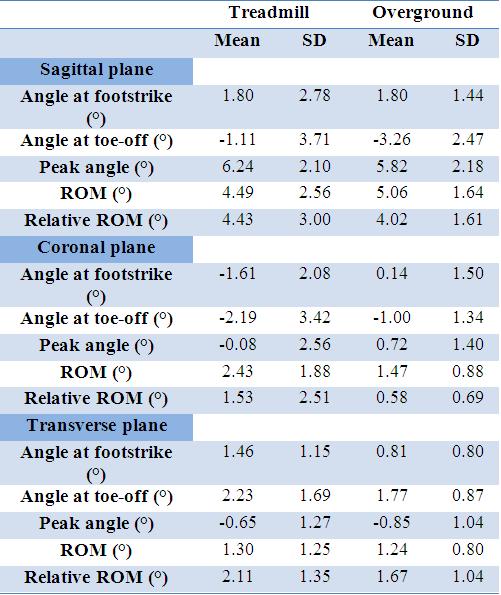 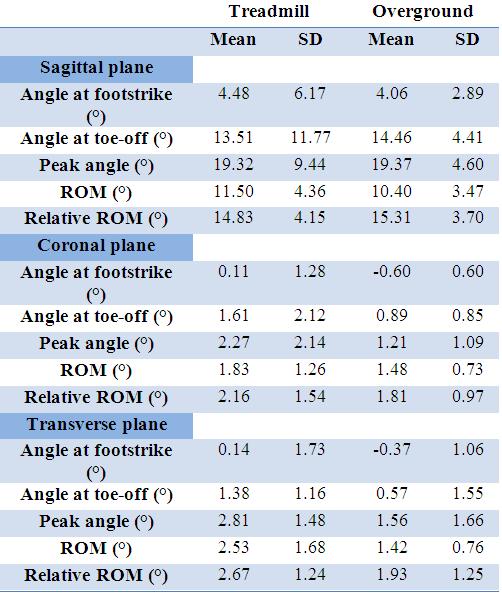 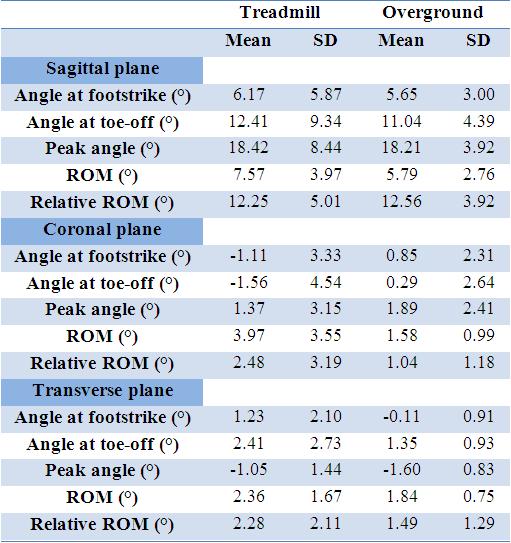 Therefore, the aim of the current investigation was to determine whether differences exist between running on the treadmill and overground in multi-segment foot mechanics and also the strain imposed on the plantar fascia. This represents the first biomechanical examination to contrast both multi-segment foot kinematics and plantar fascia strain during treadmill and overground running.

The first key clinical observation from the current investigation is that plantar fascia strain was shown to be significantly greater in during treadmill running compared to overground. This finding may be clinically relevant with regards to the etiology and progression of plantar fasciitis, which is considered to be related to the magnitude of the strain imposed on the plantar fascia itself [19]. Currently, there is very little information regarding the different susceptibility of runners to chronic injuries during treadmill and overground running conditions. The results from the current study, therefore, provide insight into the biomechanical mechanisms that may affect injury susceptibility and suggest that running overground may place runners at increased risk from plantar fasciitis.

In addition to alterations in plantar fascia strain between conditions, a significantly different sagittal plane rearfoot angle was shown at footstrike between the two running conditions. Specifically, runners were shown to exhibit dorsiflexion during overground running and plantarflexion in the treadmill condition. This result is in agreement with the observations of Wank et al., [20] and Nigg et al., [21], who showed increased ankle plantarflexion at footstrike during treadmill running. Given the significant reduction in stance time, the change in rearfoot position relative to the tibial segment may relate to a shortened stride length. Both Chia et al., [22] and Schache et al., [2] noted reductions in stride distance during treadmill running in conjunction with increased stance times during treadmill running. This finding may also relate to a switch from a rearfoot to midfoot strike pattern, although without the presence of an instrumented treadmill with an integrated force platform, it is not possible to examine the vertical ground reaction force curves to fully ascertain this.

On the basis that increases in plantar fascia strain were noted during overground running, the results from the current may provide evidence to support the utilization of treadmill running to reduce runners’ susceptibility to injury. However it is important that these observations be contextualised by taking account the aforementioned increases in stride frequency that have been observed previously for treadmill running [2, 22]. Therefore, whilst increases in plantar fascia strain were noted for each foot contact when running overground, the amount of cumulative strain may not be altered between the two running modalities, as the total number of footfalls required to achieve required velocity is greater when running on the treadmill. There is currently no epidemiological data concerning the influence of cumulative and singular loads experienced by the musculoskeletal structures with regards to the etiology of chronic injuries. It is, therefore, strongly recommended that analyses prospectively investigate the effects of treadmill an overground running on the predisposition of recreational runners to chronic injuries.

A potential drawback to the current investigation was that the treadmill data did not feature an integrated force platform. Therefore, in addition to being unable to identify footstrike modifications this meant that footstrike and toe-off events were defined using kinematic methods. The identification of gait events using kinematic techniques has been shown to be repeatable, but they are not as accurate as the gold-standard method using force platform information [23]. Plantar fascia strain was calculated using markers placed onto the foot segment and the location of plantar fascial tissue was considered in this study to span from the calcaneus to the first metatarsal. This procedure has been adopted previously in order to model the strain experienced by the plantar fascia [17, 24] and the means strain values presented in this work closely correspond with previous values. Nonetheless, this represents a simplified technique and there is likely to be some error associated with this method. Future analyses should consider more accurate techniques, such as fluoroscopic imaging in conjunction with 3-D motion analysis, to provide a more accurate measurement of plantar fascia strain during different running conditions.

In conclusion, the current investigation adds to the current knowledge in the discipline of clinical biomechanics by providing a comprehensive evaluation of the 3-D multi-segment foot kinematics and plantar fascia strain observed when running on the treadmill and overground. This study demonstrated that plantar fascia strain was significantly reduced during treadmill running. This indicates that running on the treadmill may be associated with a reduced incidence of plantar fasciitis, although additional epidemiological research is required before specific conclusions regarding injury prevention can be made

Our thanks go to Glen Crook for his technical assistance.

Comments Off on Multi-segment foot kinematics and plantar fascia strain during treadmill and overground running.