Posted on December 31, 2020 | Comments Off on Reconstruction of an Achilles rupture with 12 cm defect utilizing Achilles tendon allograft and calcaneal bone block: A case report

Chronic Achilles tendon ruptures, especially with extensive defects, are challenging to repair, and options are limited. We present a case of a neglected Achilles tendon rupture with a 12 cm defect, treated with an Achilles tendon allograft with a calcaneal bone block. The repair was augmented with a flexor hallucis longus (FHL) tendon transfer as well as human acellular dermal matrix. At 1-year follow-up the patient had no pain and was able to walk 2 miles at a time. There was no re-rupture of the affected limb, infection or allograft morbidity.

A chronically ruptured or neglected Achilles tendon is defined as a rupture with 4-6 weeks between the time of injury and treatment [1,2]. An estimated 20-35% of Achilles ruptures have a delayed diagnosis due to unrecognized injury, misdiagnosis or late presentation [1,2]. Between injury and treatment, granulation tissue between tendon ends prevents apposition and fibrous tissue develops in the rupture site [3-5]. The triceps surae muscle continues to contract and the proximal tendon stump retracts and adheres to the surrounding fascia [6, 7]. Unrecognized injury and retraction of the tendon stump may result in large defects.

Various techniques have been described for surgical repair of the neglected Achilles tendon rupture including gastrocnemius tendon advancement, turndown flaps, autografts, allografts and tendon transfers [8-12]. Which technique provides the best outcome is unknown, and some techniques are limited to smaller defects.

We present a case of a chronic Achilles rupture with a 12 cm defect reconstructed with an Achilles tendon allograft with calcaneal bone block, augmented with a flexor hallucis longus (FHL) tendon transfer and human acellular dermal matrix.

A healthy, very active, 71-year-old male initially presented with ankle weakness and difficulty with gait. He was treated by an outside provider for one year with presumed Achilles tendonitis. However, at presentation at the current attendings clinic, he had a palpable defect with a positive Thompson’s test for an Achilles rupture. There was minimal calf atrophy compared to the contralateral side. His gait was antalgic and apropulsive with poor balance. MRI demonstrated an Achilles rupture with approximately 9 cm retraction. The patient was initially offered permanent bracing because of his age. However, due to his good health, and very active lifestyle, he elected for surgical repair understanding the potential limitations of achieving a full recovery given the longstanding misdiagnosis. The patient was counseled on the probable use of allograft and tendon transfer because of the extensive defect. 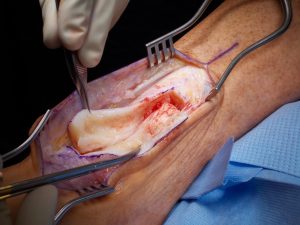 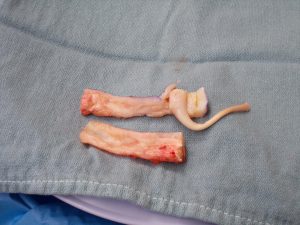 Figure 2 The proximal excised portion of the diseased Achilles.

The patient was placed prone on the operative table under general anesthesia with a thigh tourniquet. A linear incision was made just medial to the midline of the Achilles tendon and deepened to expose the tendon. The rupture site was identified. The defect had filled with interposed scar tissue, with fibrofatty and mucoid consistency. This non-viable tissue was excised proximally to the level of the gastrocnemius aponeurosis which was noted to be healthy. The degenerated tissue extended distally to the Achilles insertion, with minimal healthy tendon attachment to the calcaneus. Following debridement and excision of diseased tissue, the defect measured 12 cm with the ankle in near maximal plantarflexion. 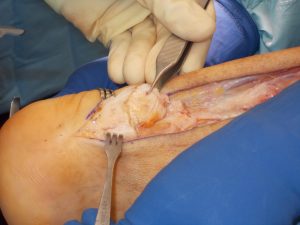 Before attachment of the allograft proximally, the ankle was placed in 30 degrees of plantarflexion to create a tensioned repair. The proximal portion of the Achilles allograft was then sutured to the gastrocnemius aponeurosis with approximately 3 inches of overlap utilizing a combination of simple interrupted and Krackow suturing, with #2, and #2-0 fiberwire.

In order to improve strength and vascularity to the repair, an FHL transfer was also performed. The FHL tendon was harvested by releasing at the level of the posterior talus, sewn alongside the medial aspect of the Achilles at anatomic tension. The musculotendinous portion of the FHL was also sutured to the undersurface of the proximal repair site with the intent to bring vascularity closer to the repair.

Finally, a human acellular dermal matrix product was sewn over the proximal repair with 3-0 Vicryl, to provide reinforcement, and scaffolding for host tissue ingrowth. The incision was irrigated, the tourniquet was released and the patient was placed into a non-weight bearing compression splint with anterior and posterior slabs. 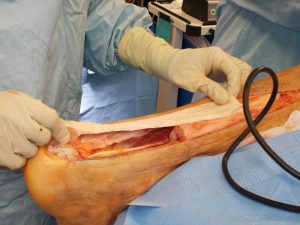 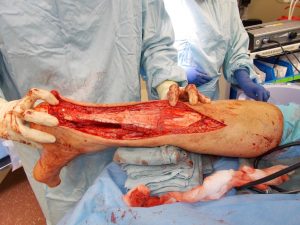 Figure 5 The proximal Achilles allograft was sutured into the gastrocnemius aponeurosis after securing the distal calcaneal block with 2 crossed screws. 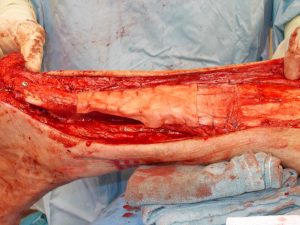 Figure 6 A human cellular dermal matrix was overlaid as the final step. 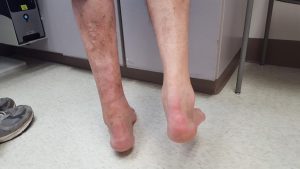 Figure 7 Patient demonstrating ability to perform partial heel rise on the reconstructed side. 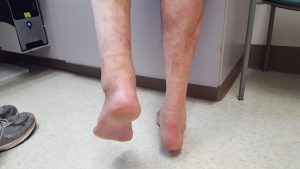 Figure 8 Patient demonstrating ability to perform heel rise on the contralateral side for comparison.

The patient had no complications during follow-up. At 1 year follow-up, the patient reported no pain and was able to return to normal daily activities, and walk 2 miles. His range of motion was symmetrical to the contralateral side, and manual muscle testing revealed only slight weakness. He was able to perform heel rise symmetrical to his contralateral side. X-rays showed incorporation of the calcaneal block graft. He was overall pleased with the surgery. 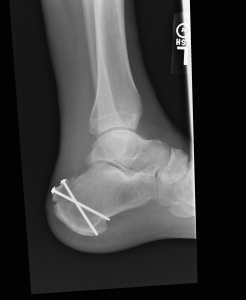 Interestingly, he was more bothered by contralateral Achilles pain. Initially this was presumed to be compensatory tendonitis. After failing conservative care, he had ultrasound evaluation, as MRI was contraindicated due to interval placement of a pacemaker. His contralateral Achilles showed findings consistent with tendinosis or chronic tearing. During this ultrasound, his reconstructed Achilles was also examined and it showed expected findings of stable appearing heterogeneous texture of the Achilles allograft with no rupture.

While the patient was satisfied with his reconstructed Achilles, he felt he was more limited by his contralateral Achilles tendinosis and eventually elected for surgery on that side as well.

Large defects following Achilles ruptures are challenging. Delay in diagnosis may lead to retraction of the tendon stump, and atrophy of the gastrocnemius muscle. Furthermore, if significant tendinosis was present prior to rupture, the actual defect may be larger than presumed following debridement. Ofili in 2016 reported that MRI underestimates the true extent of Achilles tendinosis [18]. Indeed, our patient had a 12 cm defect following debridement despite MRI initially predicting a 9cm defect.

While smaller defects may be typically treated by gastrocnemius advancement or flap, there is no consensus on how to manage larger Achilles defects. In the author’s experience, gastrocnemius advancement techniques allow repair of only up to 6-8 cm defects. Our patient had a 12 cm defect and therefore, with limited repair options, it was felt appropriate to utilize Achilles tendon allograft. Additionally, given the significant disease in the distal stump at the insertion, there was no viable tissue to suture the Achilles allograft, and therefore the calcaneal bone block proved useful for distal reattachment. One risk of a calcaneal bone block would be delayed or non-union. Deese in 2015 and Ofili in 2016 have reported delayed union with incorporation at the calcaneus. [12,19] Our patient showed radiographic healing at 6 weeks post-op.

Reconstruction using an Achilles tendon allograft with a calcaneal bone block has previously been demonstrated to have good results [18,19]. These studies did not include an FHL transfer. The FHL transfer is a relatively simple, in-phase transfer with the potential benefits of increasing strength of the repair and providing additional plantarflexion power. Additionally, the FHL transfer theoretically may provide additional vascularity from the flexor hallucis muscle belly to the repaired Achilles. The FHL transfer has been shown to have high patient satisfaction and minimal donor morbidity has been noted with this procedure [21-24]. From a technical standpoint, the use of a calcaneal bone block with screw fixation may limit the ability to secure an FHL transfer with biotenodesis as creating an additional bone tunnel adjacent to the screws may create stress risers. Therefore in the current case the FHL tendon was sutured side by side instead.

Disadvantages with allograft procedures are the risk of disease transmission, longer allograft incorporation time, and increased cost. There is also a potential amount of creep in allograft tendons. In addition, Hanna in 2014 reported that 4 of 6 patients with an Achilles allograft with calcaneal bone block ambulated with a limp and complained of weakness at 16-32 months [18]. It is important to counsel patients with longstanding neglected ruptures, that recovery of full strength may not be possible. Our patient, however, appeared to be able to perform a symmetrical appearing single heel rise on examination.

Thank you to the Swedish Medical Center Foot and Ankle Surgery Residency Program for the support. Additional thanks to Drs. Brian Rougeux and Bryn Rowe for early input into this case study.

Comments Off on Reconstruction of an Achilles rupture with 12 cm defect utilizing Achilles tendon allograft and calcaneal bone block: A case report