Swivel – type Dislocation of the Talonavicular Joint: A case report

Posted on June 1, 2011 | Comments Off on Swivel – type Dislocation of the Talonavicular Joint: A case report

Dislocation of the talonavicular joint is a rare occurrence. The swivel subtype dislocation is reported throughout the literature. Most are the result of an abductory or adductory force applied to the forefoot. Most authors report good functional results after a myriad of treatment options. Presented is a case of a 46 year-old male who sustained a medial swivel type dislocation of the talonavicular joint with concomitant fractures of the navicular and cuboid after a low-energy axial load to the foot. The case discusses some of the common issues revolving around the care of this type of dislocation.

Talonavicular joint (TNJ) dislocation is a rare injury of the foot and ankle with most reported cases occurring after major trauma. The joint complex is surrounded by a strong network of ligaments and tendinous structures that aid in the strength of this joint in the prevention of injury. When a dislocation occurs to this joint, it is considered a serious injury due to the instability that can occur across Chopart’s joint.

Main and Jowett described this dislocation type injury occurring at the midtarsal joints with a classification system to help the physician decide the best course of treatment. (Table 1) [1]

A 46 year-old male presented to the Emergency Department (ED). The patient sustained an injury to the right foot after getting down from a bunk bed. The patient stated that he landed on his right foot sustaining an axial load as the foot flexed and inverted. There was immediate pain to the foot and the patient was unable to bear any weight. Standard three view non-weightbearing radiographs were obtained in the ED showing a medial dislocation of the navicular on the talus, isolated to the talonavicular joint. (Figs. 1A and 1B) The clinical examination revealed no neurovascular deficit and the skin and soft tissue envelope was not under tension. His past medical history indicated he had bipolar affective disorder.

Figure 1A and 1B  Anteroposterior (A) and Lateral (B) view of the original injury.

The decision was made to perform a closed reduction in the ED. The patient was placed under conscious sedation and the dislocation was manually reduced by first accentuating the deformity, then distracting axially with counter pressure proximally and finally reducing the distal foot back into its natural position. (Figs. 2A and 2B) It was noted that upon relocation, a pop was felt and the foot appeared realigned relative to the injury and compared with the contralateral foot. Neurovascular status was intact to the foot after reduction. He was placed into a standard posterior splint after the reduction as opposed to a cast. This was done because there was concern the patient’s foot would swell causing cast pain and entrapment.

Computerized tomography (CT) scan was obtained which showed a comminuted, non-displaced, non-intraarticular fracture of the cuboid and navicular as well as a medial talar head impaction fracture. (Figs. 3A and 3B) Explicit instructions were dispensed for the patient to remain non-weightbearing to the injury foot. 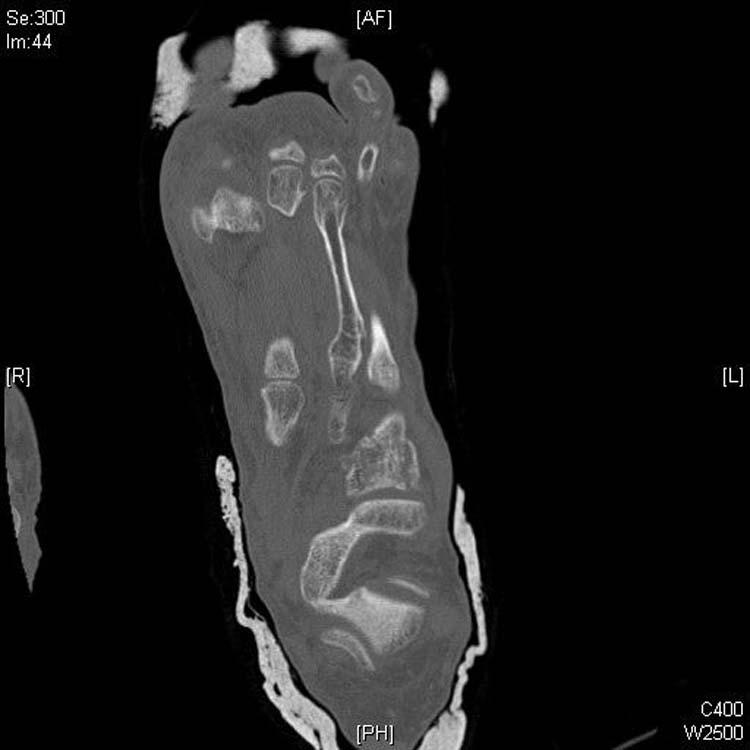 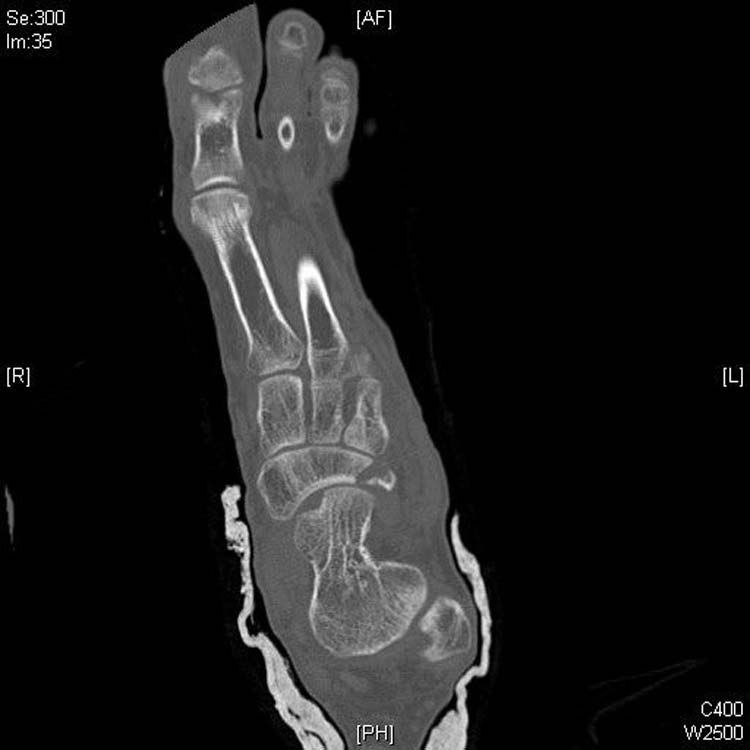 Figure 3A  and 3B  Axial computed tomography (CT) showing the cuboid fracture. (A)  Axial CT showing the navicular fracture and the talar head impaction fracture.  Post initial closed reduction. (B)

A follow-up one week later revealed that the patient had been noncompliant and walked on the foot. Radiographs confirmed that the foot was again dislocated. The decision was then made to perform a closed reduction with percutaneous fixation of the dislocation. Standard operating protocols were followed and the patient’s deformity was manually reduced intra-operatively. A Steinman pin was placed into the navicular and used as a joystick. Two 0.62 K-wires were driven percutaneously across the talonavicular joint for stabilization. (Figs. 4A and 4B) The K-wires were removed at six weeks. (Figs. 5A and 5B) Immediately after the K-wire removal, the joint was stressed under fluoroscan and deemed stable. He remained weightbearing in a CAM boot. Two weeks after the k-wire removal, the joint remained stable. He was slowly transitioned from CAM boot to regular shoe gear over a period of three weeks. He has remained full, unprotected weightbearing without complication to date.

Figure 4A and 4B  Anteroposterior (A) and Lateral (B) view after percutaneous pinning using K-wires.

Figure 5A and 5B  Anteroposterior (A) and lateral (B) radiographic view after K-wire removal.

He reports no pain or disability to the joint complex with ambulation at the latest follow-up. At his latest scheduled appointment, five months after the initial injury, the patient did not return for follow-up and was not able to be contacted for further evaluation. No evidence of avascular necrosis or delayed healing has been appreciated to date.

TNJ dislocation is a rare injury of the foot and ankle with most cases reported occurring after major trauma. Medial TNJ dislocation, like the one described, are among the more common types of deformity occurring at the TNJ after trauma with a prevalence of 30%. [2] Jowett and Main devised a classification scheme based on the direction of force to the foot. [1] (Table 1) Based on the radiographic and CT evaluation, the fracture sustained in our case is a medial swivel type. The treatment of choice for severe injuries to the midtarsal joint is immediate reduction of the deformity.

In another series, 18 patients sustained injuries to the talonavicular joint. Thirteen were medial, 5 were lateral. Of the medial, 11/13 was closed. The 11 were closed reduced under conscious sedation. 10 were excellent results at follow-up and one was fair. The two open were reduced and pinned with k-wires.

One was fair and one was poor, owing to the extent of the injury. They recommend that low energy, medial dislocations are most amenable to closed reduction with a poorer prognosis with either open dislocations or lateral dislocations. [4] Van Dorp, et al., had a small cohort of seven patients with varying degree of Chopart’s injury. AOFAS scores averaged 72 in their group and 4/7 were pain free after a minimum of six-months of follow-up. [9]

However, the distinction between open reduction versus closed reduction was not elucidated, therefore few conclusions can be drawn from this study.

A single patient case study by Pehlivan, et al., described an isolated medial dislocation at the TNJ. The injury was from a low energy mechanism, but resulted in buttonholing of the talar head through the extensor retinaculum. The deformity had to be openly reduced in the operating room. The percutaneous fixation was removed at six weeks after surgery. The patient was transitioned to regular shoe gear over the following two week period after fixation removal. At latest follow-up, the patient had little residual functional defect, however, lateral column pain with long distance ambulation was the only significant complaint. [11]

Most authors advocate the use of internal fixation for stabilization of the acutely dislocated Chopart joint. [2,3,5,6] Richter, et al., advocates that all dislocations at the TNJ be treated with open reduction and internal fixation due to the potential for vascular compromise. [5] Williams, et al., described closed reduction without the need for percutaneous fixation in a single case report with a low energy mechanism for a medial swivel pattern. The dislocation was reduced intraoperatively and under stress radiograph evaluation, was deemed to be stable. She was placed into a cast after reduction. The patient’s only complaint was her inability to dance as well after injury than prior to injury. [13]

In the evaluation of such injuries, an important factor to consider is the mechanism of injury/deforming force. Swivel type injuries are associated with fewer complications than pure dorsal dislocations due to a lesser degree of ligamentous structure involvement and preservation of plantar ligament integrity. Very few attempts should be made at closed reduction of the deformity. [2,6] If the surgeon is unable to obtain proper reduction, then one must have a low threshold for further, more aggressive reduction; surgical closed reduction with percutaneous k-wire or screw fixation, open reduction with internal fixation, external fixation or, in severe cases, primary amputation. [7]

Further considerations in treatment are timing of injury to presentation, neurovascular deficit, integrity of the soft tissue envelope and proper imaging. [8]

The prevalence of concomitant injury with talonavicular joint dislocations is quite high, in upwards of 75-90%. [9] Other studies have described coexisting injury with TNJ dislocation. [2,10,11] Our patient also sustained navicular, cuboid and talar head fractures. It was felt that these injuries did not need to be fixated since they were non-displaced and not intraarticular. Ip and Lui suggests that concomitant ligamentous injury carries a worse prognosis than coexisting fractures alone. [6] The ability of the patient to remain non-weightbearing on the foot is essential for a good outcome. In retrospective evaluation, the threshold for surgery may have been too high for our case. A full and thorough history and physical is imperative for proper treatment, but the physician must always remember to evaluate the social component; as each patient will require their own, unique set of parameters for care.

Comments Off on Swivel – type Dislocation of the Talonavicular Joint: A case report