A case of bilateral polymetatarsia without polydactyly

Posted on March 31, 2015 | Comments Off on A case of bilateral polymetatarsia without polydactyly

Polymetatarsia without polydactyly is very rare as an isolated malformation. This is a case presentation of a patient in whom circumstantially an extra metatarsal of different morphology was found in each foot at the level of the fourth intermetatarsal space. In the right foot, the heads of the fifth metatarsal and accessory metatarsal stay together to form a single metatarsophalangeal joint and a thickening of the phalanges of the fifth toe. In the left foot, the extra metatarsal appears as a vestige of bone that does not produce morphological alterations in the forefoot. Malformations presented by the patient cannot be included in any of the current classifications for polydactyly, because they are complex and widespread, leaving no place to site exceptional cases such as the one presented.

PPolydactyly is a congenital anomaly characterized by the presence of extra digits on the hands, feet or both and is the most common birth defect that affects the forefoot [1-3]. Some studies refer to polydactyly as a condition in which there is the appearance of all, or part of one or more additional rays. Other studies include only duplication of phalanges in the definition [1,2,4]. Polymetatarsia is defined as a developmental anomaly characterized by one or more extra metatarsal bones. Polymetatarsia most commonly occurs with polydactyly and cases without a supernumerary digit are very rare and few cases have been described [5,6]. In a review of the literature only five cases have been published of polymetatarsia without supernumerary digits with an extra hypoplastic metatarsal of well-defined morphology [1,5,7,8].

The two cases published by Ishii el al [5], are presented with a metatarsal with complete duplication (on the right foot) unlike the other three cases where there are varying degrees of bony fusion between metatarsals. The published case has the particularity that the polymetatarsia without extra toes is bilateral and probably represents two development stages of the same malformations.

Many attempts to classify polydactyly have been reported in the literature but there is currently no consensus on a classification that is widely used by different authors [9]. Although this case is an exception to any attempt at classification, in the future it may help detail the intimate mechanisms of production of polydactyly.

An 82-year-old woman consulted for a painful callus that appeared several years ago at the lateral aspect of the right fifth toe. On examination of the right foot, there was syndactyly of the fourth and fifth toes, slight widening of the forefoot, and a hard callus at the level the interphalangeal joint of the fifth toe. The metatarsophalangeal and interphalangeal joints of the fourth and fifth toes were mobile. No other alterations in the left foot or hands were found. The patient did not endorse a medical history or family history of malformations. A radiological study of both feet and hands was requested. The x-ray of the right foot showed an extra hypoplastic metatarsal in the fourth intermetatarsal space. This metatarsal seemed to form a fibrous union in its proximal third with the diaphysis of the fourth metatarsal and distally it was joined to the head of the fifth metatarsal without fusing with it. The fifth toe was biphalangial with thickened phalanges and the proximal phalanx was articulated with both metatarsal heads to form a single metatarsophalangeal joint (Figure 1 and 2). 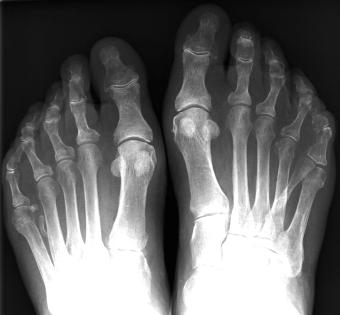 Figure 1 Weightbearing anteroposterior radiograph of both feet showing bilateral polymetatarsia with extra hypoplastic metatarsals between the fourth and fifth metatarsals. 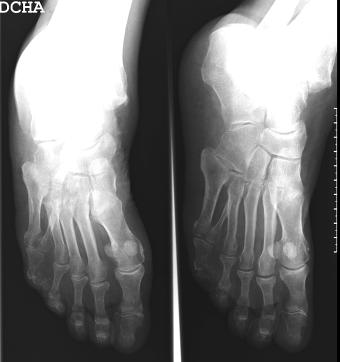 Figure 2 Non -weightbearing anteroposterior and oblique radiographs of the right foot. The extra metatarsal and the fifth metatarsal are joined at their heads without bone fusion forming a single joint. There are thickened phalanges of the fifth toe. 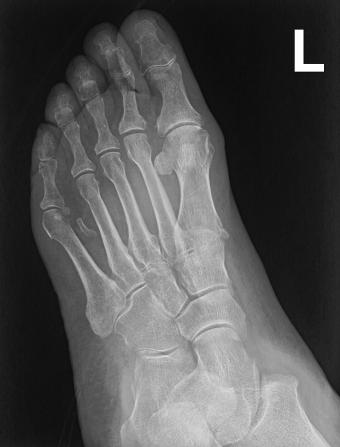 Figure 3 Oblique X-ray of the left foot shows an osseous rudiment of a metatarsal in the fourth intermetatarsal space and two sesamoid bones around the head of the fifth metatarsal.

The X-ray of the left foot showed an extra rudimentary metatarsal located in the fourth intermetatarsal space which it was parallel to the diaphysis of the fourth and fifth metatarsals. There were also two ossicles with a rounded form near the head of the fifth metatarsal which were considered sesamoids (Figure 1 and 3). The proposed treatment for the patient was performing an exostectomy of the first phalanx of the fifth toe of the right foot, but she rejected it.

Mackusick and Temtany [10] were the first to classify polydactyly according to the location of the extra digit: preaxial if it involved to the first ray, central if it affected the second to fourth ray, and postaxial if it affected to fifth ray. Venn-Watson [11] in a review of 65 patients provided a classification according to the morphological appearance and the anatomy of the involved metatarsal. In the postaxial polydactyly, the metatarsal could be Y-shaped, T-shaped, wide, or completely duplicated. Watanabe et al [12] classified 330 feet in 265 patients with polydactyly of the foot on the basis of ray involvement and the level of duplication. These authors divided the lateral radius polydactyly (postaxial) in two new main groups based on the level of ossification and bone alignment: fifth-ray duplication, referring to the medially duplicated supernumerary fifth toe, and sixth-ray duplication, referring to the laterally duplicated supernumerary sixth toe. These authors found that polydactyly with duplication of the fifth ray was much more frequent, which was subdivided in metatarsal type, proximal phalangeal type, middle phalangeal type, and distal phalangeal type. More recently, Lee et al [9] evaluated 113 feet of 95 patients who had surgery for the treatment of postaxial polydactyly. Based on the morphologic, radiographic, and operative findings the cases were classified according to the origin of the accessory digit: middle phalangeal, proximal phalangeal, floating, fifth metatarsal, or fourth metatarsal.

The clinical case presented is a postaxial polydactyly of both feet, the most common in all series [9,12]. According to the classification of Watanabe et al, findings on the right foot could form a postaxial polydactyly with fifth ray duplication and with metatarsal type. Unlike the comments made by these authors, the extra metatarsal is not accompanied by duplication of the proximal phalanges (in the cases of divergent phalanges) neither fusion of the phalanges in their bases and diaphysis in case of parallel phalanges. According to the classification of Lee et al, the patient would have in his right foot a postaxial polydactyly of fourth metatarsal type (10.6% of cases of their series). Based on these authors’ reports, there must exist a duplicated toe of abnormal appearance that originates from the fourth metatarsal (or accessory metatarsal) and fuses with the fifth digit according to several patterns. Syndactyly between the fourth and fifth toes was present only in medially duplicated supernumerary fifth toes [9,12].

Recently, Seok et al [13] presented a new classification of polydactyly of the foot on the basis of the presence of syndactylism, axis deviation from the toe that is to be preserved, and the presence of metatarsal extent of the extra digit. These authors reviewed 532 cases of polydactyly and with this classification sought to facilitate surgical strategy and predict clinical outcomes. As in previous classifications, the absence of an extra digit makes it very difficult to include the case presented in any classification. Also, the same could be considered as an undescribed variety of isolated brachydactyly of the fifth toe with absence of the middle phalanx or that this could be fused with the distal phalanx (symphalangism). It is well known that the brachydactyly may be associated with other malformations such as syndactyly, although typically they show an autosomal dominant pattern of inheritance with variable expression and penetrance [14].

It is well known that the differentiation of the human limbs occur in a proximodistal sequence. The formation of the skeleton of the limbs can be divided into four basic stages: patterning of the skeletal elements, formation of the individual condensations, elongation and segmentation of the condensations, growth and differentiation. These steps are characterized by distinct molecular or morphological events. Molecular analysis of isolated forms of brachydactyly has shed some light on the role of certain genes in normal human skeletogenesis and limb formation [14,16].

In my opinion, it is not yet sufficiently documented that mechanisms have failed to start the formation of an extra metatarsal. As in the case of the left foot, mechanisms have been disrupted by early induction of more distal elements. On the right foot a possible explanation of the etiology of polymetatarsia without a supernumerary digit would be contiguity fusion of over-induced phalanges after induction of excess digital rays which would lead to thickening phalanges [5,17].

It is necessary to gain a better understanding of the regulatory mechanisms involved in embryonic limb development. This will allow us to identify the causes for the appearance of an extra metatarsal. Because in some cases the distal phalanges are induced (with or without formation of extra digits), while in other cases the absence of distal induction generates a foot with practically normal morphology.