Posted on March 31, 2015 | Comments Off on Effect of a self-managed exercise protocol for subjects with ankle sprain

This study describes the effect of a self-managed exercise protocol which has been designed to address the pain and disability associated with ankle sprain. The intervention has been developed with reference to current evidence based exercise regimes for ankle sprain. Thirty three consenting grade I lateral ankle ligament sprained athletes participated in the study. Both experimental and control groups received parallel physiotherapy treatments including ultrasound and frictional massage. Experimental group received a self-managed exercise protocol and control group received only stretching and strengthening exercises continuously for 4 days. Baseline and post intervention data were recorded using Visual Analogue Scale. Mann Whitney U test was used to compare pain scale difference between the two therapies. The self-managed exercise protocol group improved with a significant difference (p<0.05) in pain compared to the control group. This self-managed exercise protocol produced a significant pain reduction compared to the usual stretching and strengthening protocol within four days of treatment. As the pain is one of the major factors which limit the performance, this can be widely used to improve short term ankle function of athletes.

Ankle sprain is a common sport injury resulting in morbidity among athletes and the general population [1,2]. People who play sports experience approximately one ankle sprain for every 1000 person-days of competition. The highest incidence of ankle sprain is reported among subjects aged 5 to 24 years [3]. Although often considered as minor injuries, ankle sprains cause short term immobility and loss of function, with a risk of long term problems and re-injury [4,5].

A proper exercise protocol is a vital part of the rehabilitation process for ankle sprains to restore range of motion, muscle strength, neuromuscular coordination, and functional sporting activities of the joint. Properly planned exercise programs have been shown to have clinical success for patients suffering from various foot and ankle pathologies.

Reported studies prescribe lengthy training periods of 2 -6 weeks whereas what is required is more efficient and accelerated protocols for the patients benefit. Reported studies in other countries have focused on a few exercise interventions such as strengthening and improving proprioception but it is essential to correct functional disfigurements with the use of stretching, balance exercises and functional exercises in addition to strengthening and proprioception [6]. No studies were found from Sri Lanka on the subject. The general practice in Sri Lanka is that of protocol which consists of stretching and strengthening exercises mainly due to the scarcity of physiotherapists (381 per 100,000 populations- Annual Health Bulletin Medical Statistics Unit, 2012) [7].  An effective and a low cost self-managed rehabilitation protocol for ankle sprains suitable for the body types [8] of Sri Lankans is a necessity in this context. The objective of this study was to compare between a self-managed exercise protocol that requires no supervision of a professional and the usual exercises consisting only of stretching and strengthening for ankle sprain. The self-managed protocol was developed using the available evidences in literature according to a hierarchy of exercises from the simplest to the complex.

Subjects were randomly selected for the study from the patients visiting Physiotherapy Service Unit from February, 2012 to May, 2013. Physical examination of the lower leg was carried out and a thorough history of the subject was taken to exclude other ankle injuries. Combined with the comprehensive history and previous records of medical investigations for common clinical tests (palpatory tenderness, anterior drawer test, talar tilt test, and squeeze test) were used to detect ankle sprains and to exclude other ankle injuries. Sport medicine clinicians and the team examined and diagnosed the grade of the ankle sprain. Grade II/ grade III lateral ankle sprain, medial ankle sprain, syndesmosis injuries, and other ankle conditions were excluded with the support of clinical symptoms and history, clinical tests, X-rays and whenever required, ultrasound scans as well. Thirty three (21 males and 12 females) consenting ankle sprained athletes, between the ages of 15 and 36 years  presenting within 4-7 days (sub-acute stage of the ankle sprain) after a grade I lateral sprain were recruited. Seventeen subjects were assigned to the control group and sixteen subjects were assigned to the experimental group randomly. Both groups were advised about their injury and the importance of the exercises. They were treated continuously for 4 days and one therapeutic session was carried out per each visit.

On the second visit, 5 more repetitions of earlier exercises were recommended according to the subjects’ improvement before introducing 7 new exercises; (i) standing on one leg (Figure 7a) for 10 seconds without shivering and progress it to standing on curled toes (Figure 7b) for 10 seconds without shivering to improve the  balance (ii) touching the points on the floor surrounding the subject with both hands, standing on affected leg (Figure 8) (iii) touching the points on the floor surrounding the subject with the normal heel, while standing on affected leg (Figure 9) to increase ROM, Proprioception, coordination and balance (iv) walking on a thick rope (Figure 10) to improve proprioception (v) standing on balance board (Figure 11) to improve balance (vi) double leg jumps (Figure 12) to increase confidence, proprioception and balance (vii) progress it to single leg jumps(Figure 13) to increase proprioception and balance (number of repetitions from 5-10 according to the subjects’ condition). 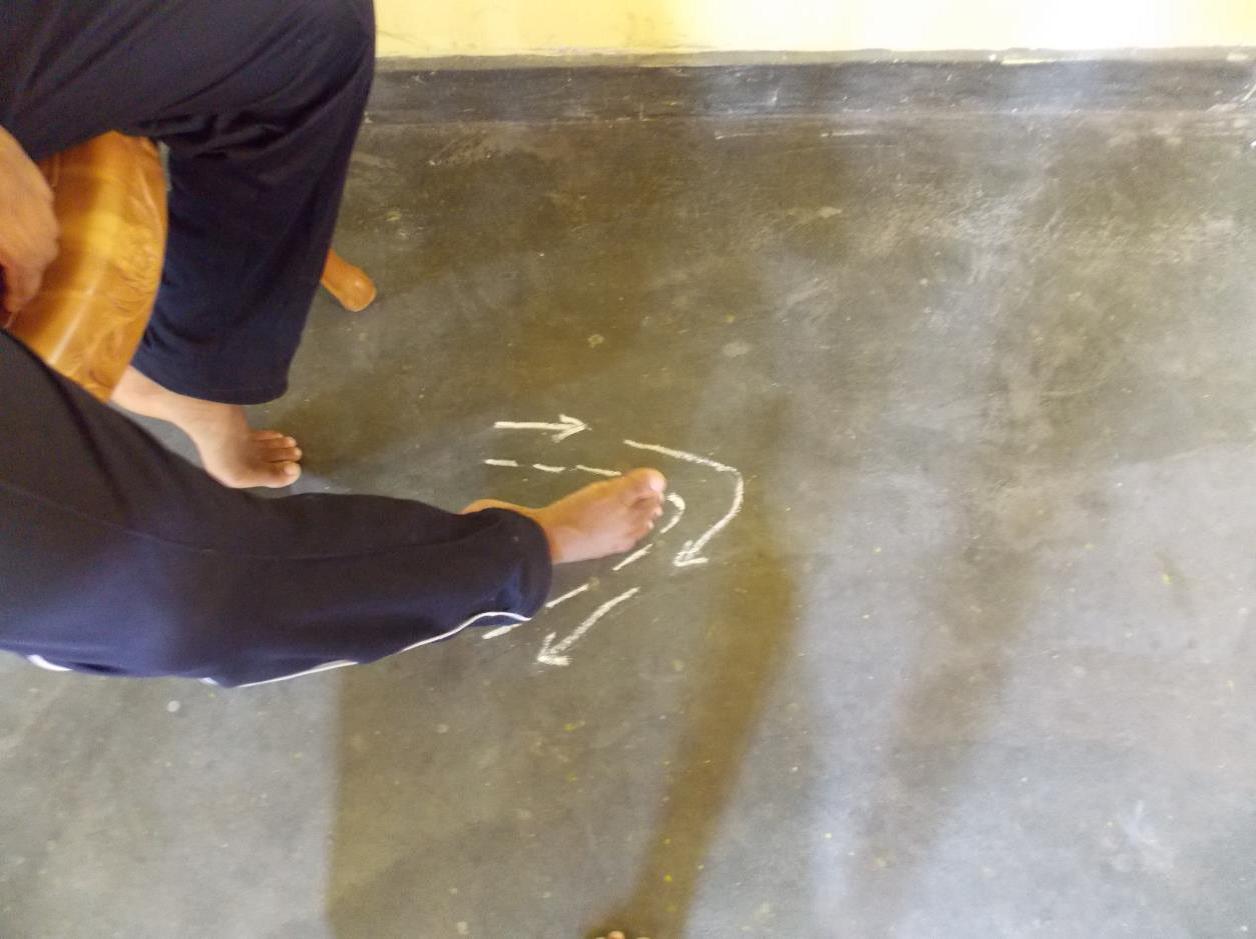 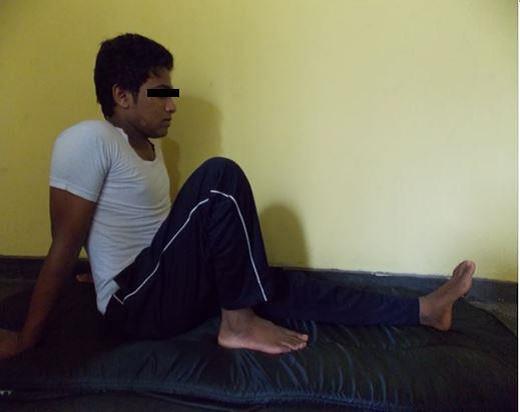 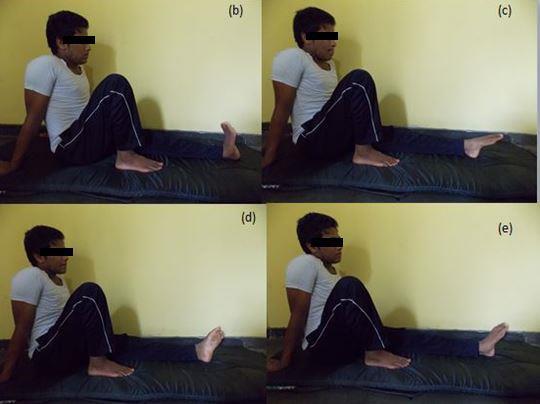 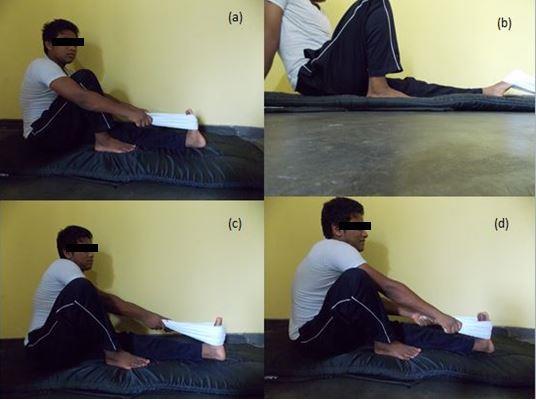 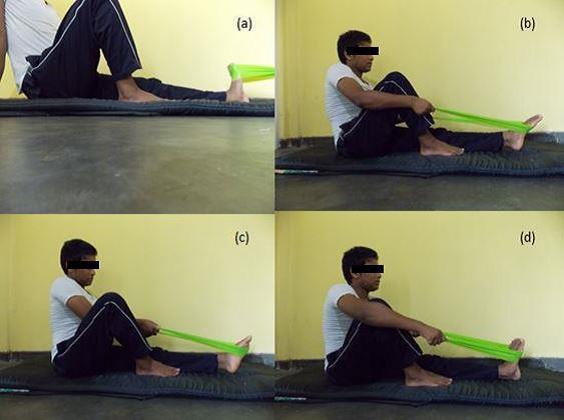 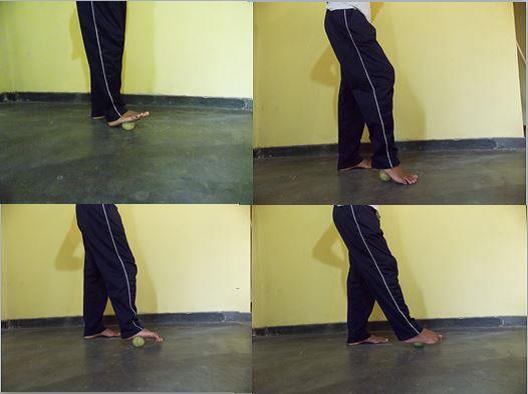 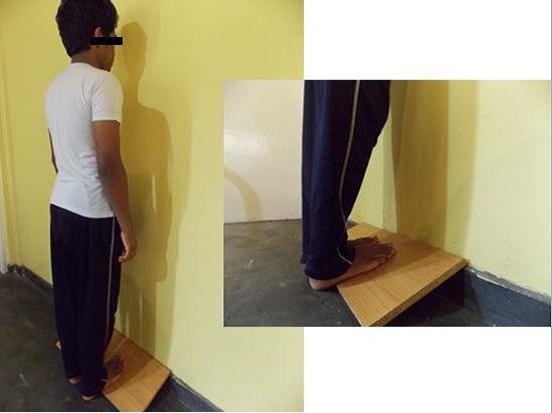 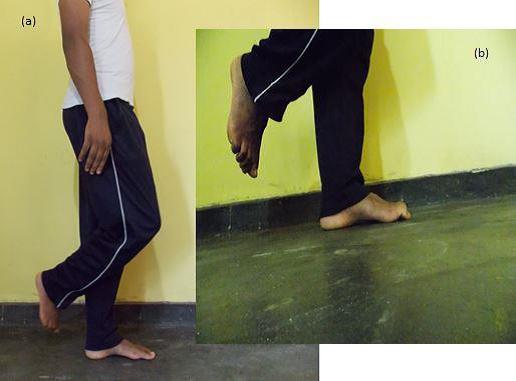 Figure 7a- 7b Balance exercises. 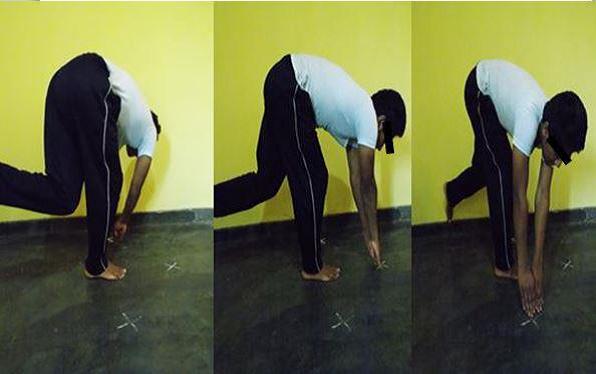 Figure 8 Touching the points on the floor by both hands. 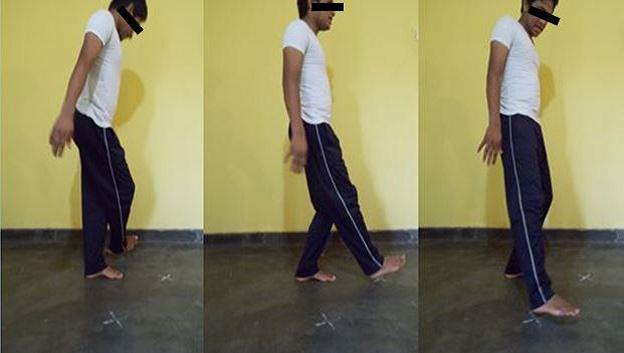 Figure 9 Touching the points on the floor by heel. 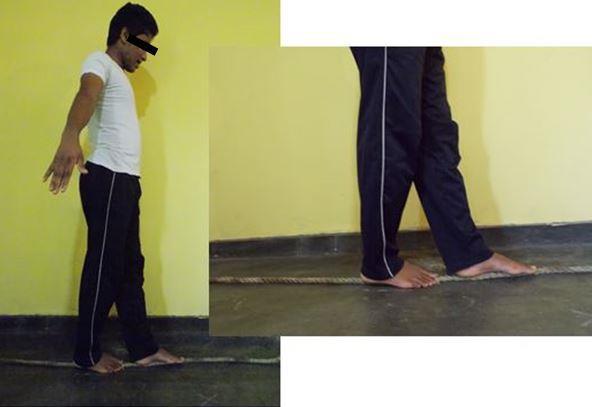 Figure 10 Walking on a thick rope. 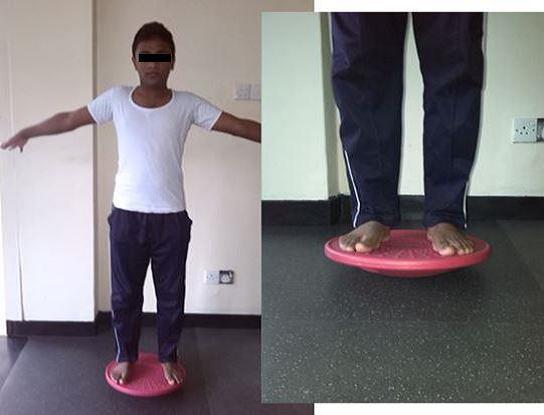 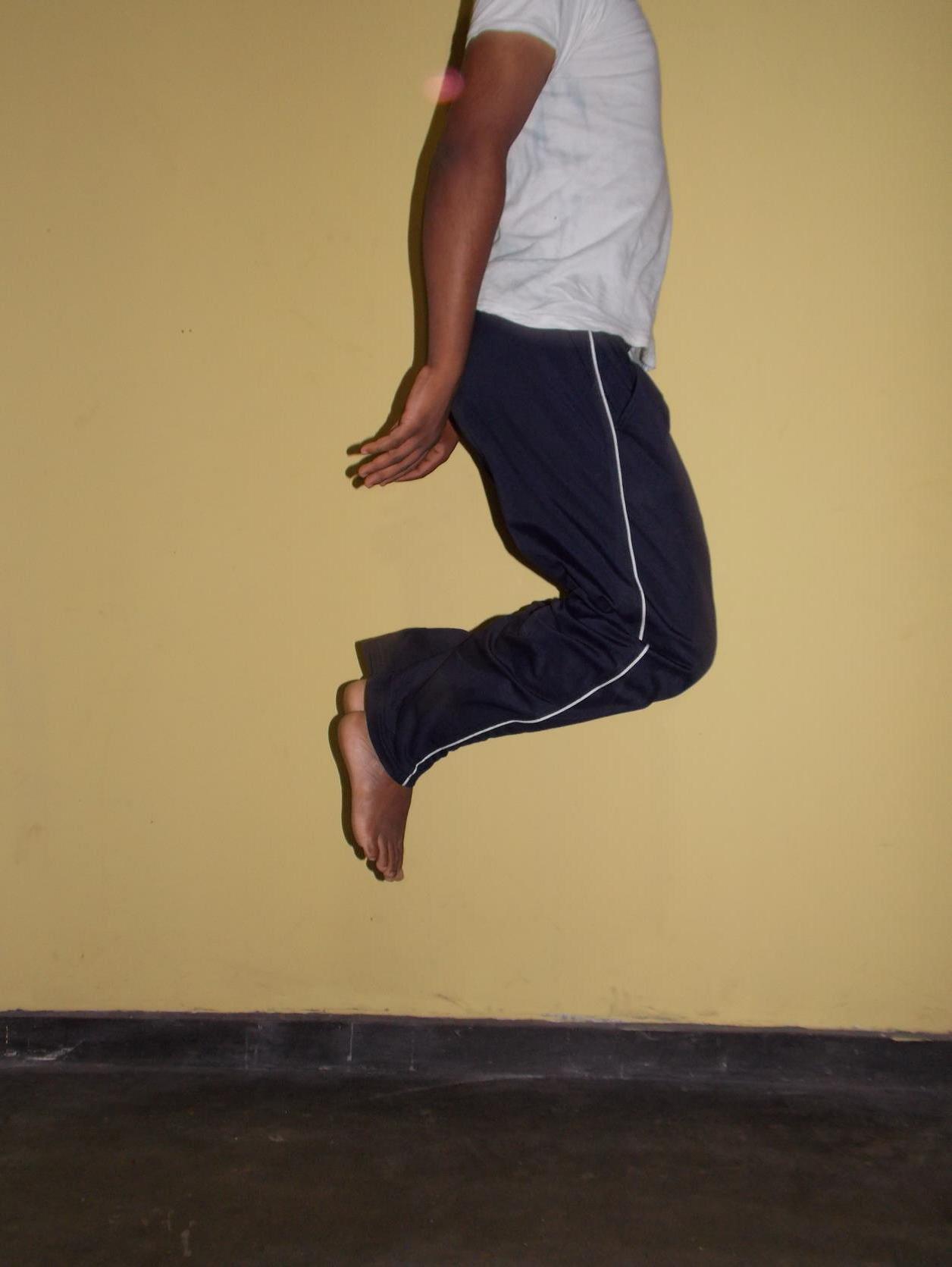 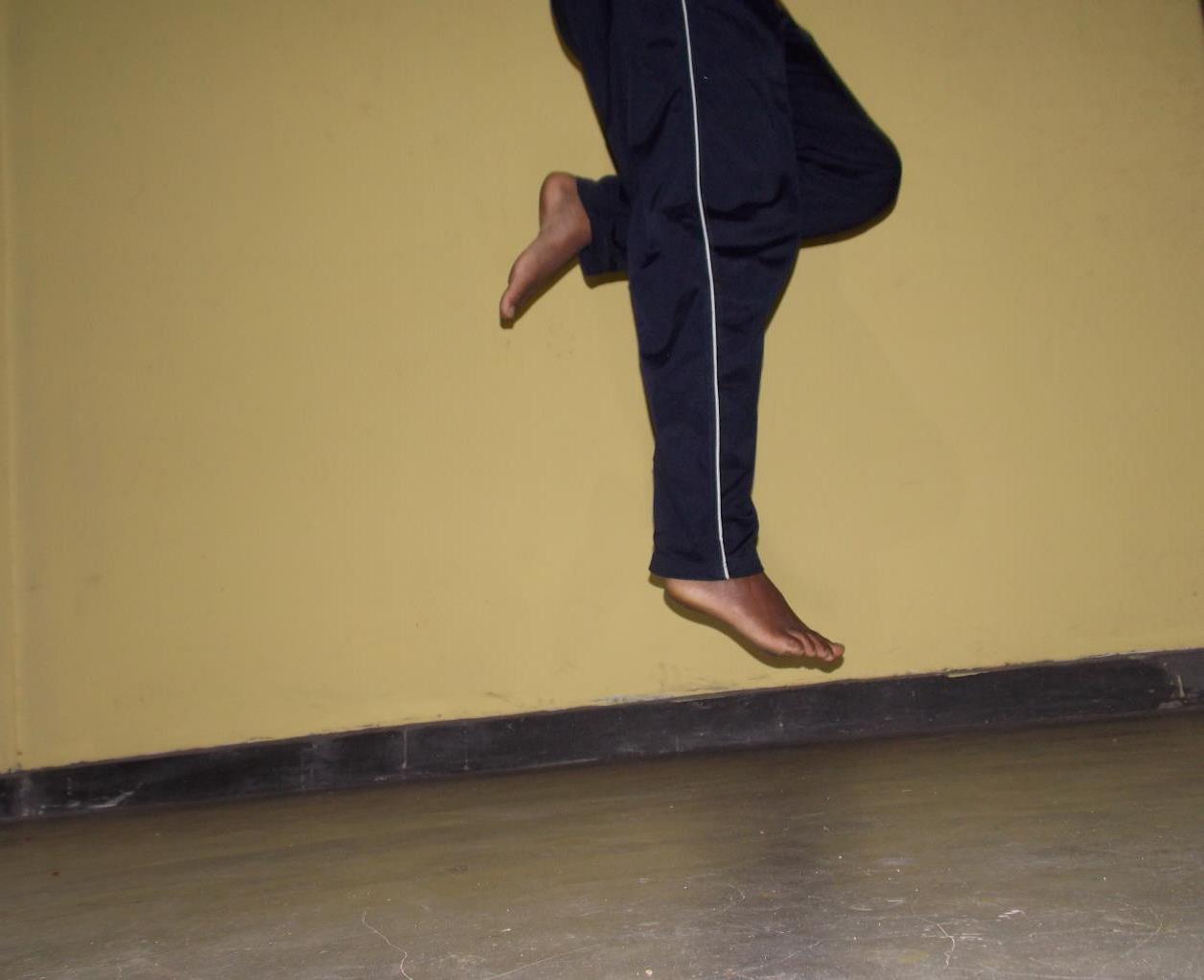 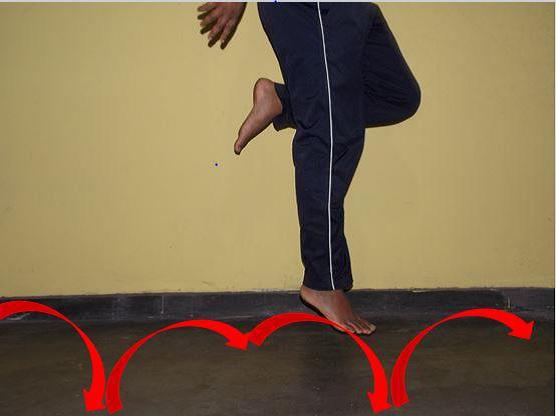 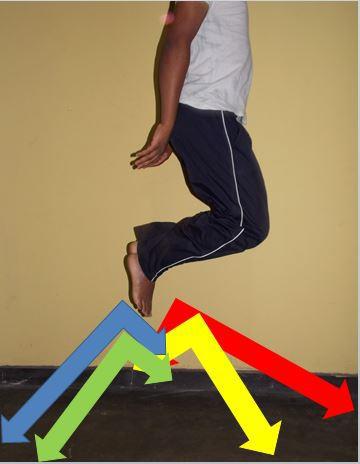 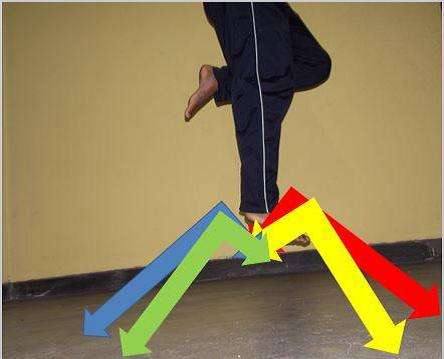 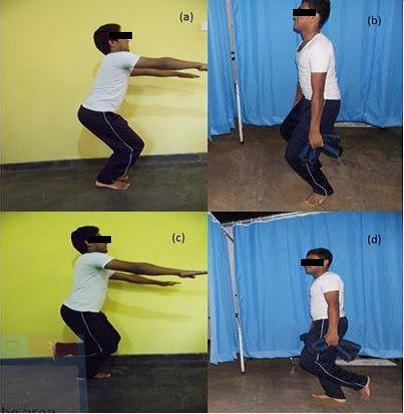 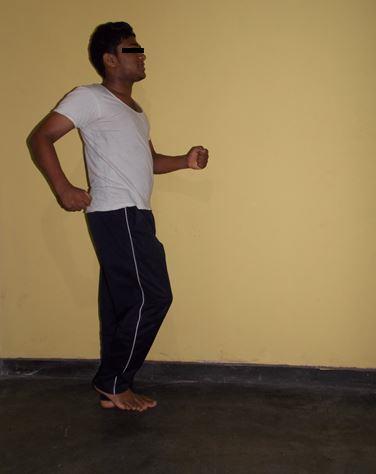 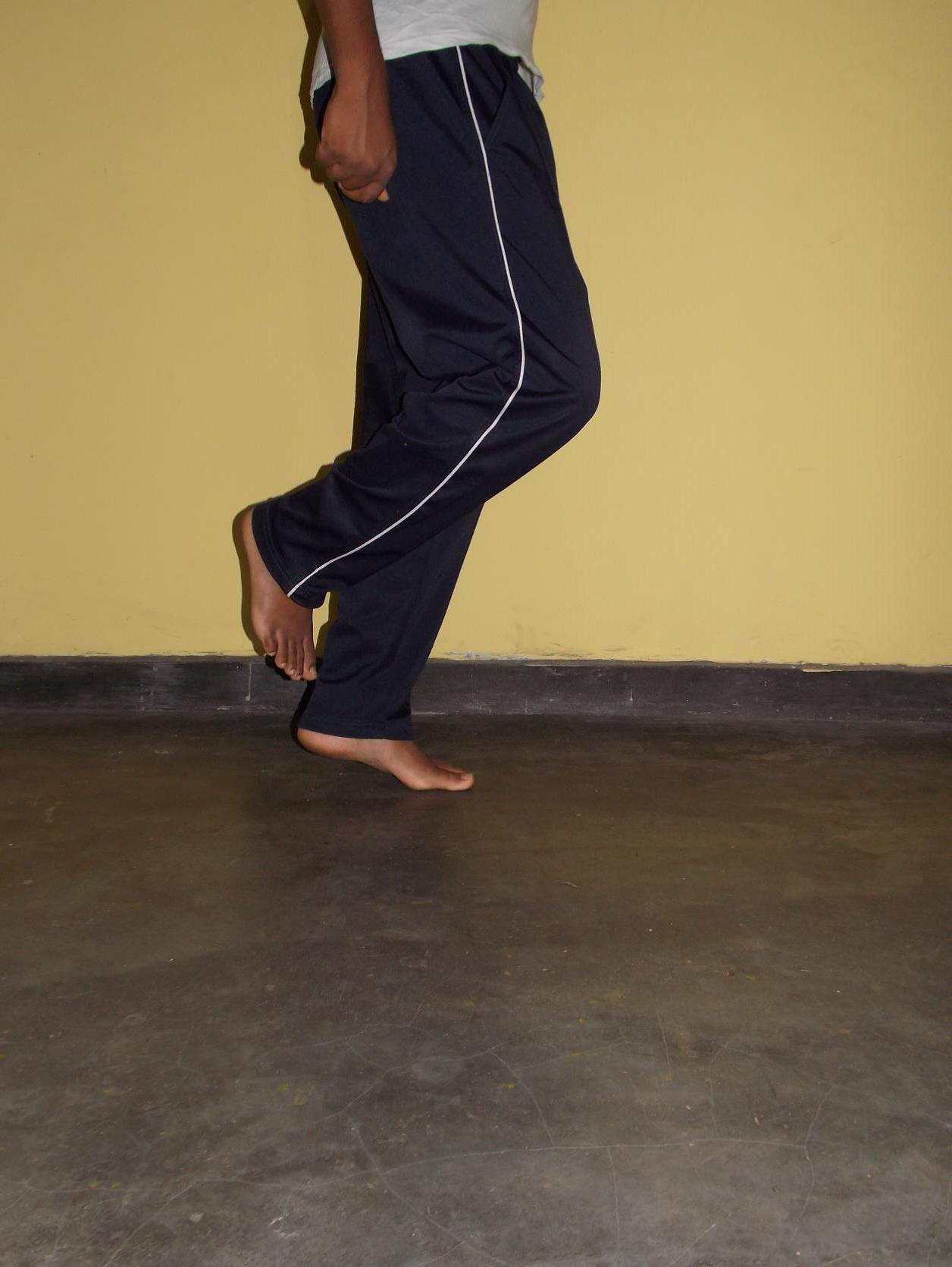 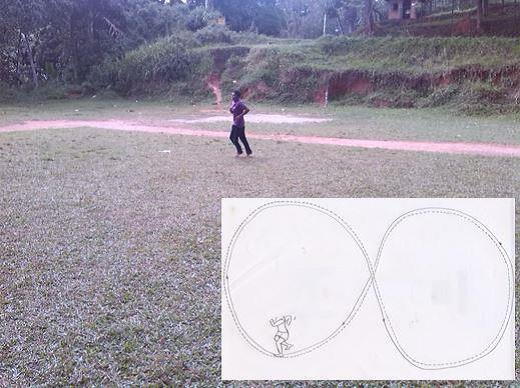 Figure 21a- 21b Tread mill exercises.

Frequent breaks were given in between each exercise set. If the subjects felt any difficulty while performing exercises subjects were allowed enough rest until the pain alleviated up to a bearable level. Subjects who failed to complete the exercises as described, even after a rest period and frequent breaks due to aggravation of pain were excluded from the study.

On the day of first visit before treatment, maximum pain felt at activities was recorded using a Visual Analogue Scale. Again on the fifth day before treatment pain was recorded while asking the subject to perform the same activity which produced the maximum pain at the first visit. Differences of the pain scale were compared using Man Whitney U test. This study was conducted as a part of a major study which has been approved the ethical clearance.

The first visit before the therapy session (1st Visit) and on the fifth day before the therapy (Final Visit) session pain recorded was analyzed for each group.  Mean pain difference was 1.93 in the experimental group and 1.12 in the test group. Means and Standard deviations of the pain in the first visit and the final visit are given below for the experimental group (Table 1) and control group (Table 2).

Group which received the self-managed exercise protocol has shown a significant difference (p=0.013) at 0.05 significance level compared to the control group.

As a common disabling condition among athletes, ankle sprain causes loss of practicing hours, loss of competitiveness and loss of chances of participating in competitions. Therefore sport medicine related health professionals should practice an appropriate methodology for rapid rehabilitation.

Study conducted by Docherty et al in 1998 [8] has shown that 6 week strength-training protocol using rubber tubing 3 times a week has improved strength and joint position sense of the ankle. Study of Bleakly et al [9] has shown that in 4 week accelerated exercise protocol consisted of ankle rehabilitation exercises focusing on muscle strengthening, neuromuscular training and sports specific functional exercises has improved ankle function after ankle sprain. Two week functional training program of Kein-Steiner et al [10] has concluded that manual muscle strengthening and proprioception training including strength and proprioception was effective in return to normal function. Above studies spend 2 to 6 weeks training period where this study spends only 4 continuous visits for pain improvement. Management in the acute phase itself might be a possible contributing factor for such rapid improvement. Docherty [8] and Kein Steiner [10] have focused ankle strengthening and proprioception in their exercise program, where Bleaklys’ study [9] has not included stretching and ROM exercises. Rehabilitation of ankle sprains should be structured and individualized aiming at re-establishment of full range of motion, coordination, balance, proprioception and strength. The newly developed exercise protocol tested in this study concentrates on therapeutic interventions such as stretching, strengthening, balance, proprioception and functional exercises. Significance of this protocol is that it can be performed independently by the patient without the support of a physiotherapist or a sport medical professional.

This self-managed exercise protocol produced a significant pain reduction compared to the usual stretching and strengthening protocol within four days of treatment. Apart from pain standard outcome measures such as strength and range of motion should be used in finding the effectiveness of this exercise protocol to bring back the patient to normal activity and sports and the likelihood of recurrence. As the pain is one of the major factors which limit the performance, this can be widely used to improve short term ankle function of athletes.

Author would like to thank Dr. Asela J. B. Ratnayake for coordination the Sport Medicine Clinic of Teaching Hospital Peradeniya and Mr. R. M. Nisala Madushanka for demonstration of the exercises for the photographs.