Posted on March 31, 2015 | Comments Off on Normalization of equinus forces with gastrocnemius recession after Evans calcaneal lengthening osteotomy

Evans calcaneal lengthening osteotomy is a powerful surgical technique utilized in the correction of a flatfoot deformity. The known biomechanical complications associated with performing the calcaneal osteotomy alone involve increased lateral column pressures. The present study involves a patient who developed a sub fifth metatarsal ulceration with weightbearing after an Evans calcaneal osteotomy. The ulceration was resolved by addressing the concomitant equinus deformity through a gastrocnemius recession. The development of an ulceration with weightbearing acceptance after an Evans calcaneal lengthening osteotomy has not been reported to the author’s knowledge.

The Evans osteotomy, first introduced in 1961, has over the years proved value in the surgical correction in flatfoot repair. By lengthening the lateral column relative to the medial column, the medial arch is restored [1]. However, more recent studies have explored the biomechanical implications of performing this procedure alone for repair of subtle flatfoot. Calcaneocuboid joint degeneration and subluxation, fifth metatarsal stress fractures, and lateral midfoot pain are among the documented biomechanical complications unveiled upon full weightbearing [2-7]. The following study is a presentation of a patient who underwent an Evans calcaneal osteotomy and developed an ulceration sub fifth metatarsal head when weightbearing. To the author’s knowledge, ulcerative complications following an Evans osteotomy has not been reported. The present case demonstrates the powerful corrective ability of the Evans osteotomy, the acute biomechanical complications when performed solo, and a method to disperse localized lateral forces.

A 24-year old female presented one year after having an Evans calcaneal osteotomy to her left foot at an outside facility. Patient stated prior to the surgery she experienced medial arch pain which was resolved after the surgery. However, she subsequently developed an ulceration sub-fifth metatarsal head with ambulation in regular shoe gear (Figure 1). The ulcer was repeatedly debrided for over six months. The patient had also tried conservative treatments including stretching exercises and orthotics to off-load the fifth metatarsal head. Throughout the day, she was in significant pain localized to the area of the ulceration. Lateral weight-bearing x-rays demonstrated a screw stabilizing the graft in the calcaneus. The graft appeared approximately 10mm in width. An MRI was taken to denote the amount of soft tissue destruction involved. MRI demonstrates circumferential fifth metatarsal head soft tissue destruction and mild marrow edema within the proximal cuboid (Figure 2).

After determining conservative treatments were ineffective, surgical options were explored. By lengthening the lateral aspect of the foot with the previous surgery, greater pressure was sustained by the fifth metatarsal head. Additionally, the patient demonstrated decreased ankle dorsiflexion with knee extension. The objective of surgery involved changing the weight bearing distribution of the foot. Therefore, a gastrocnemius recession was discussed. A gastrocnemius recession would allow the heel to bear greater pressure in a controlled fashion; thus relieving the pressure at the fifth metatarsal head.

The patient was placed on the operating table in a supine position with a bump under her contralateral hip.  The left lower extremity was prepared and draped in the usual method. Presented by Roberts and Hansen, the technique utilizing a speculum in the execution of gastrocnemius recession was performed [8].  The separation between the gastrocnemius and soleus muscles was palpated approximately two finger breadths posterior to the tibial crest. A five centimeter longitudinal incision was made in this location and deepened down through subcutaneous tissues using finger dissection. The saphenous vein and nerve were retracted throughout the entirety of the case. The  crural fascia peripheral to the muscle bellies was transected. The deep fascia on the posterior aspect of the soleus and anterior aspect of the gastrocnemius was identified. A long speculum was inserted between the muscle bellies. The gastrocnemius deep fascia was incised with the foot dorsiflexed. As the incision was made with a #15 blade on a long handle, the edges of the deep fascia were noted to separate approximately 2cm. After the dorsiflexory motion of the ankle joint was noted to increase to past neutral, the wound was flushed and the crural fascia, subcutaneous tissue, and skin were closed in the usual technique.

The patient was immobilized for three weeks with the leg in an extended position and ankle dorsiflexed to avoid the fascia from scarring in a contracted position (Figure 3). During this nonweightbearing period, her plantar fifth metatarsal head ulcer healed. 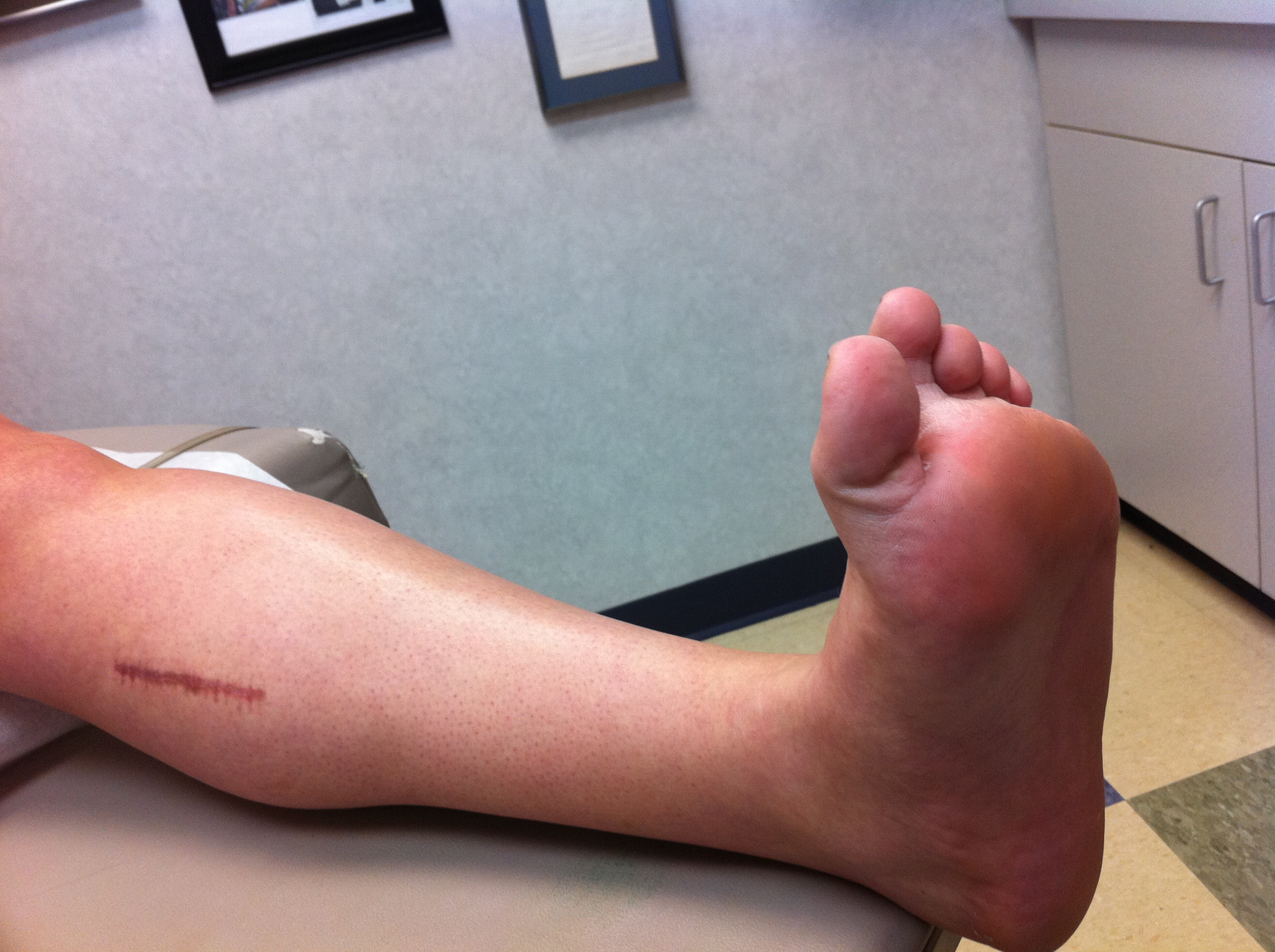 The patient performed knee and ankle range of motion exercise for the following weeks as she was partial weightbearing. She began bearing full weight on the left lower extremity in four weeks. Seven months into the post-operative period the ulcer did not reoccur, and the patient demonstrated no plantar fifth metatarsal head or heel pain (Figure 4).

Figure 4 Two months after bearing weight, the patient demonstrates normalization of skin pigmentation and resolution of ulceration and circumferential erythema.

Multiple studies have demonstrated the biomechanics complications following the Evans calcaneal lengthening procedure involve insults to the lateral column [3]. Up to 45% of patients have reported lateral foot pain after ambulation commenced [2]. Increased lateral shoe wear has demonstrated the postoperative varus attitude of the forefoot [7]. Calcaneal-cuboid joint total contact pressure and peak contact pressures were noted to significantly increase with graft size and result in calcaneal-cuboid subluxation [9]. Fifth metatarsal stress fractures are documented biomechanical complications [10]. Research shows patient pain and dissatisfaction levels to significantly increase with elevated postoperative lateral midfoot pressures [3]. The results of the current study support the previous research. To the author’s knowledge an ulcerative complication secondary to the biomechanical predispositions involved with an Evans calcaneal lengthening has not yet been reported.

Due to the insult sustained by the lateral column, many authors advocate an osteotomy or arthrodesis to plantarflex the medial column and/or gastrocnemius recession to counter equinus and dissipate lateral column forces. Varying degrees of plantarflexion through a first tarsometatarsal fusion or Cotton osteotomy decrease load transmission through the lateral aspect of the foot [3]. When adding a first metatarsocuneiform arthrodesis, lateral pressures after an Evans procedure were seen to normalize, thus restoring the anatomic tripod effect [6]. Moreover, multiple studies have demonstrated a large predominance of equinus in flatfoot pathology [15,16]. Through contractures, the gastro-soleal complex maintains the valgus position of the rearfoot and subsequently deludes the hindfoot forces in the tripod effect [17,18]. During the gait cycle, equinus causes premature forefoot loading and reduces propulsion [19]. Thus the development of a plantar fifth metatarsal head ulceration after an Evans osteotomy in a patient with concomitant gastrocnemius equinus is unsurprising.

The Evans calcaneal osteotomy is powerful lengthening procedure utilized in the surgical correction of flatfoot deformities.  Careful dissection and planning is necessary to avoid postoperative complications. Anatomically, the posterior, anterior, and middle facets of the subtalar joint, peroneal tendons and sural nerve are at risk [20,21]. Once the hurdle of anatomic injury has passed, the surgeon must intraoperatively avoid the long-term complications with weight acceptance. Adjunctive procedures have been shown to alleviate the stress placed on the lateral column after an Evans procedure [3,6]. As supported by the present report, patient satisfaction is enhanced when force dissipation is addressed. The current case report is indeed limited by its size. Also the surgical technicalities regarding the Evans procedure performed were not explored seeing as the surgery occurred in an outside facility. Though graft size appears standard and seems to have no bearing on the consequent ulceration, this possibility cannot be excluded. In conclusion, the present case and previous research suggests the Evans calcaneal lengthening procedure should be performed with an adjunctive procedure, such as a gastrocnemius lengthening, to offload the fifth metatarsal head.