Posted on March 31, 2015 | Comments Off on Osteoid osteoma of talus: Case report

Osteoid osteoma rarely presents in the small bones of the upper and lower extremities. A high degree of suspicion and appropriate imaging studies are important to make an early diagnosis. We present such a case that was treated over a prolonged period of time with no relief of symptoms before a diagnosis of osteoid osteoma could be confirmed.

Osteoid osteoma is a benign, osteoblastic well circumscribed tumor of spongy bone. It represents 2-11% of all bone tumors located in the foot and ankle [1,2]. A high index of suspicion of this disease should be held while treating patients with chronic ankle pain. This will allow early diagnosis, expedite the treatment, and avoid suffering and late complications.

A 16 year old male Asian Indian in origin presented to us with a painful left ankle for 2 years duration. The patient had been in and out of general physician’s clinic with no relief of his symptoms and no clear diagnosis. The pain was isolated to the anteriomedial aspect of his ankle, which was exacerbated on ambulation and persisted during the night. General physical examination of the patient was unyielding. On local examination, temperature of the ankle was normal, there was no swelling but there was tenderness more specifically located just anterior and below the medial malleolus. There was a limitation of dorsiflexion of ankle and the subtalar joint range of motion was restricted.

Blood chemistry of the patient was normal with a hemoglobin level of 11.5gm/dl, Erythrocyte sedimentation rate of 15mm/hr, normal C-Reactive protein, a total white cell count of 4500/cc.  The patient’s rheumatoid factor levels and uric acid levels were not elevated. Radiographs of the foot and ankle were taken which showed degenerative changes involving the subtalar joint and subchondral lucency of talar dome [Figure 1].  A CT Scan of the ankle showed a small lucent area with central calcification and surrounding sclerosis involving the medial aspect of the talus, with secondary degenerative changes in the subtalar joint [Figure 2,3]. A Tc-99m MDP three phase bone scan was also done.  Early angiographic and immediate static images revealed increased tracer uptake in the region of left ankle. Delayed static images also revealed an area on increased tracer uptake in the region of left ankle (a central focus with diffuse peripheral uptake). Findings of both computerized tomographic scan and bone scan were suggestive of osteoid osteoma of medial aspect of talar dome. A subtalar arthrodesis was done using Ollier’s approach and the lesion was curetted from the talar dome by doing an osteotomy of medial malleolus for access to medial dome of the talus. Histopathological examination of the curetted material was also done which confirmed osteoid osteoma. Patient was symptom free at 2 years of follow up. 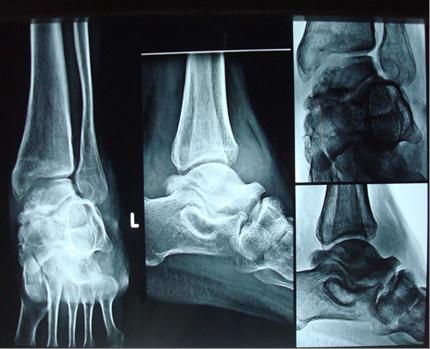 Figure 2 and 3 CT scan of the ankle showing a small lucent area with central calcification and surrounding sclerosis involving the medial aspect of the talus with secondary degenerative changes in subtalar joint.

Osteoid osteoma was described by Jaffe in 1935 [3]. Pain and the symptoms are disproportionately more compared to the size of the lesion. Over 50% involve the femur or tibia, and is seen mostly in young people below the age of 30 years. The pain typically responds to salicylates. Radiographic features include a small radiolucent area (nidus) with surrounding dense sclerosis. Tc-99m MDP scintigraphy reveals intense localized activity. The incidence of osteoid osteoma in the foot and ankle ranges from 2% to 11%, and most commonly affects the talus [1,2]. In the foot, osteoid osteoma is commonly located in cancellous bone or within a joint, where the periosteal reaction is minimal or sometimes completely absent [4,5]. For this reason, osteoid osteoma tends to remain radiographically occult owing to the lack of periosteal reaction and complex anatomy of the lower extremity. Anterior ankle impingement, ankle sprain, chronic ankle pain, or inflammatory arthropathy can masquerade symptoms of osteoid osteoma of the talus, leading to delayed diagnosis [6-9]. Because of the limitation of radiographs, early high resolution CT scan is considered the gold standard for making the pretreatment diagnosis and initiate early treatment to reduce complications.