Posted on March 31, 2015 | Comments Off on The test-retest reliability of different ankle joint center location techniques

Accurate and reliable joint identification is imperative for the collection of meaningful kinetic and kinematic data. Of the lower kinetic chain both the hip and knee joints have received a considerable amount of attention in 3D modelling. However, the reliability of methods to define the ankle joint center have received very little attention. This study investigated the reliability of the two marker method (TMM) and the functional ankle method (FAM) on estimating the ankle joint center. Furthermore, the effects of the two-marker method reliability for defining the ankle joint center when the ankle was covered with a brace or protector was investigated. 3D kinematic data was collected from ten participants (8 female and 2 male) whilst walking. The ankle joint center was defined twice using each test condition; TMM (WITHOUT), FAM (FUNCTIONAL), TMM when the ankle was covered with a brace (BRACE), and TMM when the ankle was covered with a protector (PROTECTOR). Intraclass correlations (ICC) were utilised to compare test and retest waveforms and paired samples t-tests were used to compare angular parameters. Significant differences were found in the test-retest angular parameters in the transverse and sagittal planes for the WITHOUT, BRACE, and FUNCTIONAL conditions. The strongest test-retest ICC’s were observed in the WITHOUT and PROTECTOR conditions. The findings of the current investigation indicate that there are fewer errors using the TMM when the ankle is uncovered or when covered with soft foam that is easy to palpate through.

Accurate joint center identification is imperative for the collection of reliable and accurate lower limb kinetic and kinematic data for gait analysis [1,2]. Advances in three-dimensional (3D) motion capture systems are allowing for more detailed analysis of human movement than ever before but the efficacy and clinical interpretation of the data is only as good as the application of markers used to track the movement [3]. Unfortunately there can be inherent flaws in the application of surface markers when attempting to quantify movement of the underlying bones.

Skin artefacts [4] and experience level of the investigator applying the marker [5] both contribute to errors in data collection accuracy.

The reliability of different hip and knee joint center locations have been examined previously in biomechanical literature, however there is currently a paucity of published information regarding the reliability of various ankle joint center location configurations. Therefore the aim of the current investigation is to assess which method, TMM or FAM, is the most reliable method to define the ankle joint center. Kinematic data will be compared using Intra-class correlation analyses to identify which method is the most reliable.

Participants completed five walking trials striking an embedded force platform (Kistler Instruments Ltd., Alton, Hampshire) that sampled at 1000 Hz [18]. The start of the stance phase during the walking trials was determined as the point at which the force plate first recorded a vertical ground reaction force that exceeded 20 N [19]. Kinematic and ground reaction force data were obtained during the right leg stance phase. Kinematic data was recorded using an eight camera motion capture system (Qualisys Medical AB, Goteburg, Sweden) tracking retro-reflective markers at a sampling rate of 250 Hz. Using the calibrated anatomical system technique (CAST) [20], the retro-reflective markers were attached to the 1st and 5th metatarsal heads, calcaneus, medial and lateral malleoli, and the medial and lateral femoral epicondyles. These markers were used to model the right foot and shank segments in six degrees of freedom. Another four markers attached to a rigid plastic mount were secured to the shank using elasticated bandage and were used as tracking markers for the shank.  To track the foot, the 1st and 5th metatarsal heads and the calcaneus were used.

Before dynamic trials were captured a static trial of the participant stood in the anatomical position was captured in three conditions; wearing ankle braces (BRACE), wearing ankle protectors (PROTECTOR), and without a brace or protector (WITHOUT). The static trial was used to define the ankle joint using the TMM using the medial and lateral malleoli markers. Also a FAM was delineated without any brace or protector. The FAM trial involved the participant standing on their left leg, raising their right leg in the air and dorsiflexing followed by plantarflexing the foot five times. The dorsiflexion-plantarflexion range of motion was typically around 60°. The ankle joint center was taken as the stationary point relative to the shank and foot segments [14]. Once the dynamic trials were captured, the medial and lateral malleoli markers were removed, and then reapplied so a static trial of each test condition was recorded again.

The ankle protectors used for the current investigation were a pair of Nike ankle shield 10 (Nike Inc, Washington County, Oregon, USA) and the ankle braces used were a pair of Aircast A60 (DJO, Vista, CA, USA).

Anatomical and tracking landmarks were identified within the Qualisys Track Manager software and then exported as C3D files to be analysed using Visual 3-D (C-Motion, Germantown, MD, USA) software. The walking trials were filtered at 6 Hz using a low pass 4th order zero-lag filter Butterworth filter [21]. Two methods of defining the ankle joint center were utilised and applied to the walking trials; the first used the medial and lateral malleoli markers to define ankle joint center and the second used the functional movement dynamic trial to calculate the ankle joint center. Data were normalized to 100% of the stance phase then processed gait trials were averaged. 3D kinematics of the ankle joint were calculated using an XYZ cardan sequence of rotations. 3D ankle joint kinematic measures which were extracted for further analysis were 1) angle at footstrike, 2) angle at toe-off, 3) angular range of motion (ROM) from footstrike to toe-off during stance, 4) peak angle during gait.

The results indicate that the test and retest 3D kinematic waveforms measured as a function of each ankle joint center configuration were qualitatively similar and quantitatively showed a high level of similarity (ICC ≥0.779). It should be noted however that some statistically significant differences in discrete kinematic parameters were observed. Table 1 shows the similarity between test and retest waveforms for each ankle configuration and Tables 2-5 and Figures 1-4 present the discrete ankle joint kinematics and 3D waveforms for each configuration. 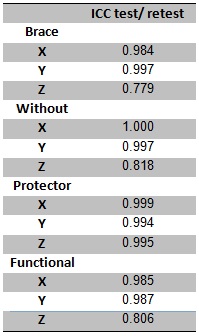 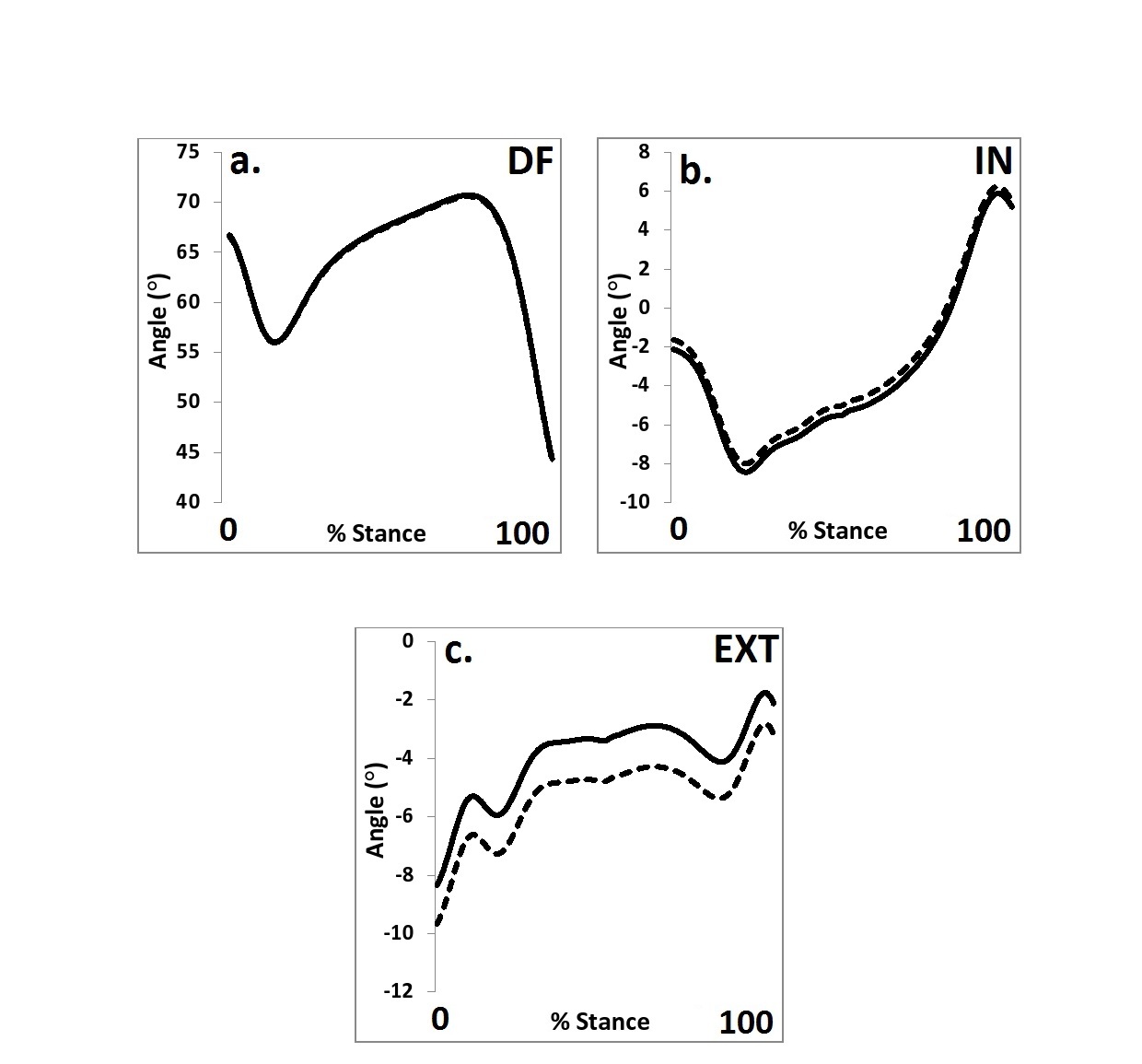 Figure 1 Ankle joint kinematics for the without condition in the a. sagittal, b. coronal and transverse planes (black = test and dash = retest) (DF = dorsiflexion, IN = inversion, EXT = external). 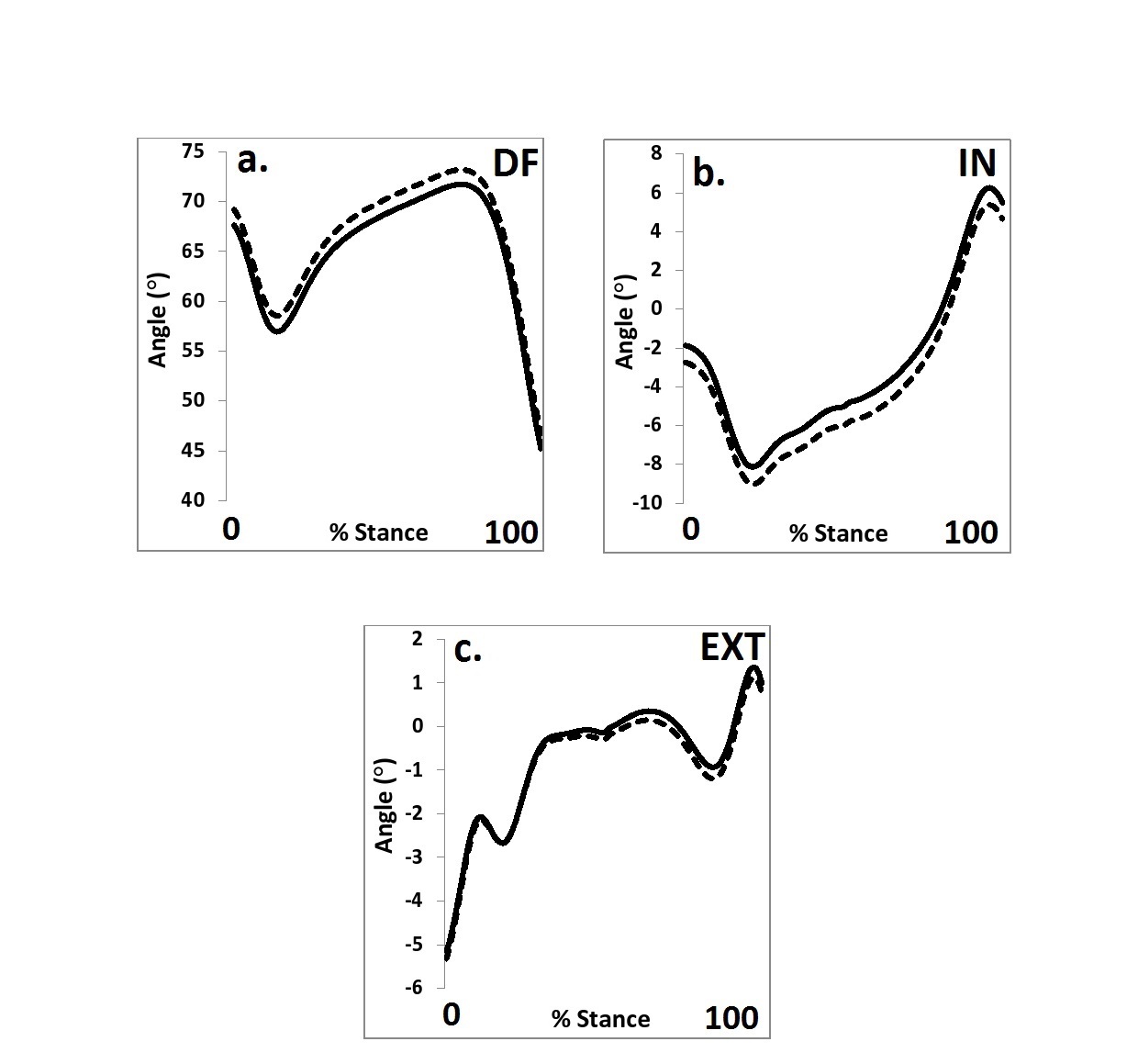 Figure 2 Ankle joint kinematics for the functional condition in the a. sagittal, b. coronal and transverse planes (black = test and dash = retest) (DF = dorsiflexion, IN = inversion, EXT = external). 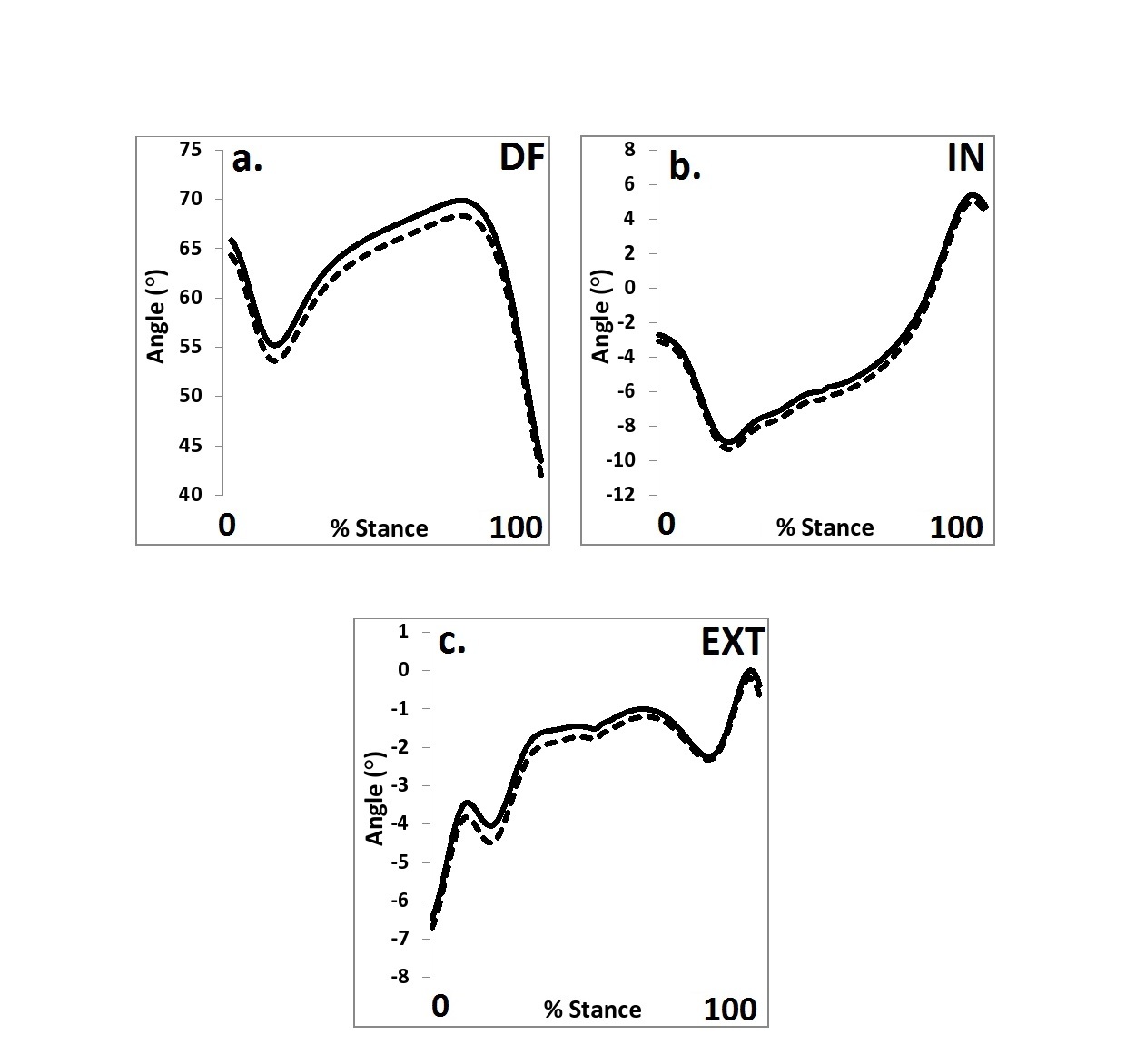 Figure 3 Ankle joint kinematics for the braced condition in the a. sagittal, b. coronal and transverse planes (black = test and dash = retest) (DF = dorsiflexion, IN = inversion, EXT = external). 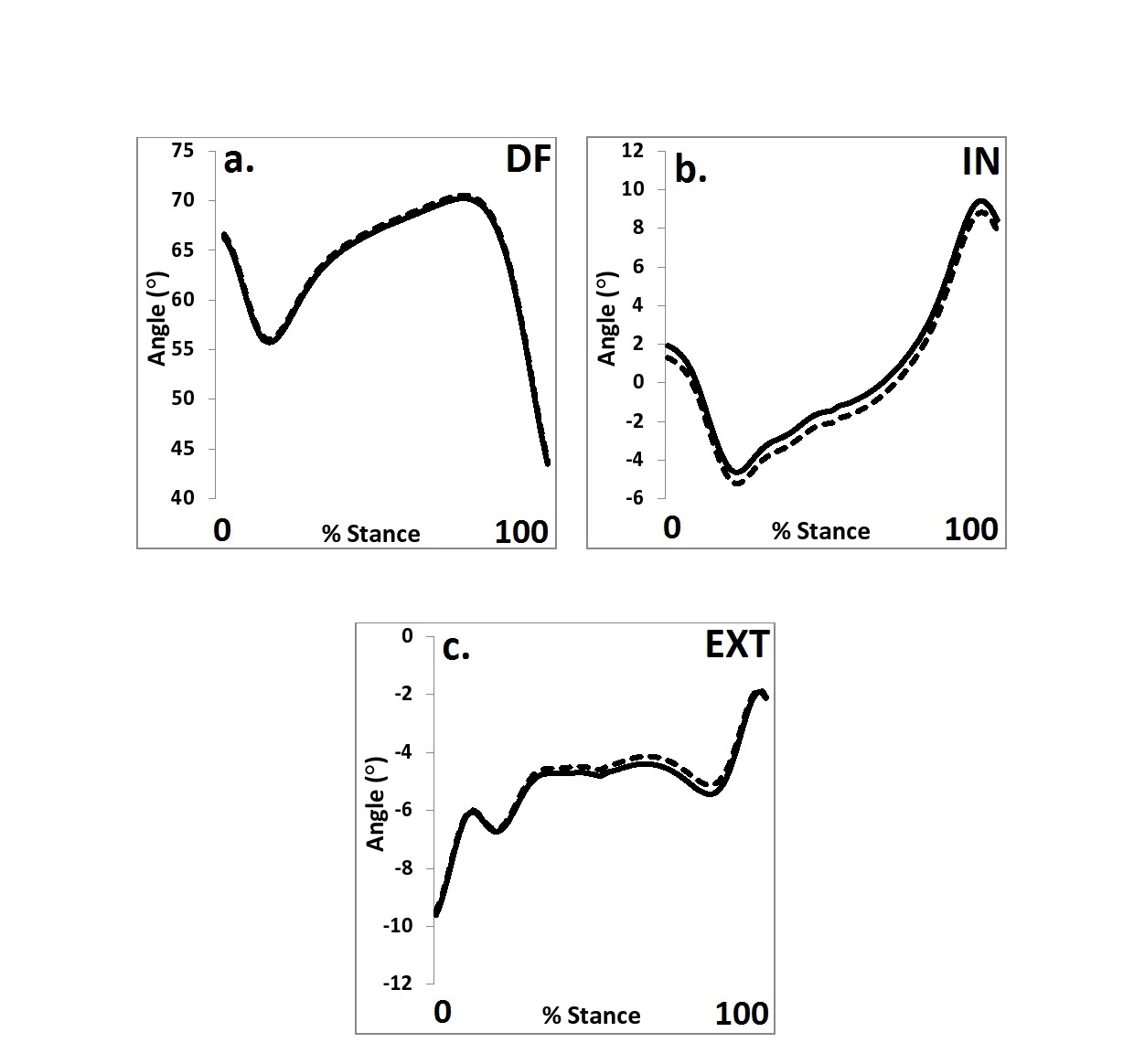 Figure 4 Ankle joint kinematics for the protector condition in the a. sagittal, b. coronal and transverse planes (black = test and dash = retest) (DF = dorsiflexion, IN = inversion, EXT = external).

It is important to note that all four conditions showed no significant test-retest differences in the coronal plane. The coronal plane waveforms also had the highest test-retest ICC’s indicating a high level of reliability (ICC≥0.987). Therefore, the TMM and FAM methods can both be reliably utilised to assess inversion and eversion. This finding goes against findings by Besier et al [6], Sinclair et al [11], Sinclair et al [22] both of whom proposed that sagittal plane kinematics are more reliable and less susceptible to alterations than the transverse and coronal planes. However, these studies looked at the hip and knee whereas the current study investigated the ankle. 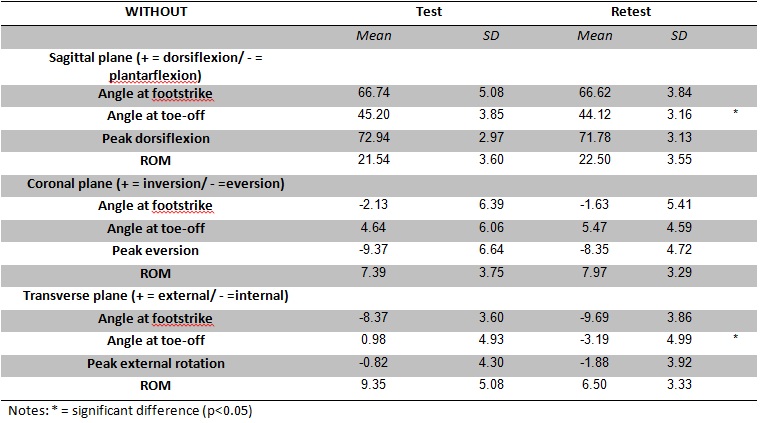 Table 2 Without ankle brace or protector. 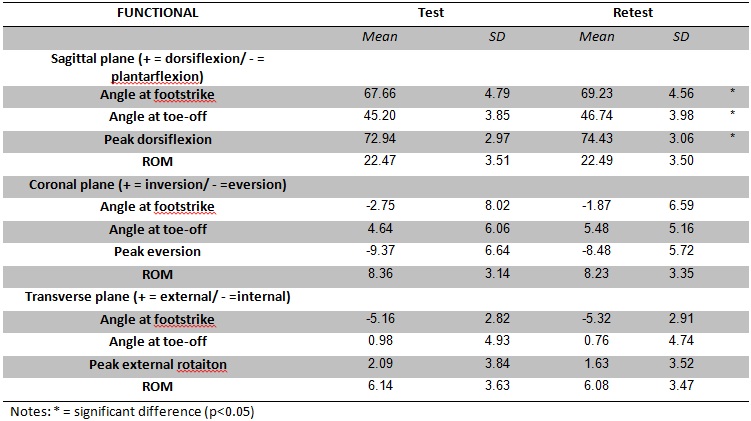 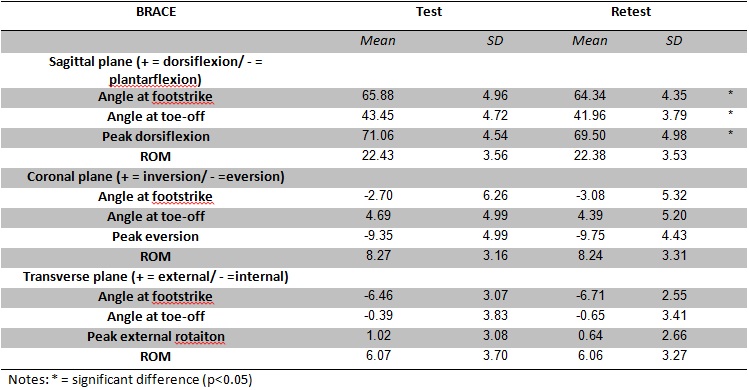 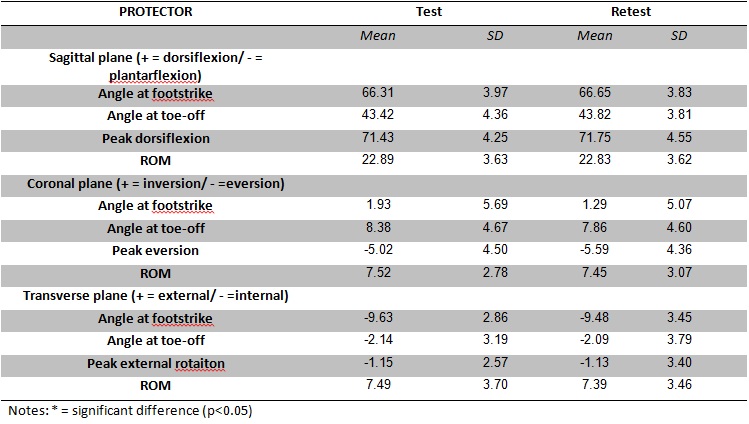 Out of the four conditions the braced condition was the least reliable (ICC≥0.779) and exhibited a higher number of significant differences than the protector or without conditions. The error in the brace condition is most likely due to the hard outer shell making it difficult to palpate the malleoli. A proposed methodology to allow for more accurate data collection for a braced ankle could be to take a static using an unbraced ankle, making sure that the tracking markers on the footwear are secured using a strong adhesive, then removing the footwear and putting on the brace before putting the footwear back on. This methodology needs further investigation for test-retest reliability before being utilised by clinicians.

There are limitations to the current investigation that should be acknowledged. First, all participants were of a healthy BMI with no skeletal abnormalities. This made palpitation and identification of landmarks relatively easy whereas participants with a larger BMI and skeletal abnormalities may lead to difficulties with landmark identification. Second, whilst the current study looked at the reliability of TMM and FAM it did not consider their accuracy in locating true center of the ankle joint. It is therefore recommended further work be undertaken to investigate which method, TMM and FAM, is more accurate and reliable at identifying the anatomical joint center using radiographic techniques.

In conclusion whilst research has considered the reliability of hip and knee joint center locations techniques, information regarding the ankle joint center is lacking. The present study adds to the current knowledge regarding the reliability of different ankle joint center location techniques. The findings of the current investigation indicate that there are fewer errors using the TMM when the ankle is uncovered or when covered with soft foam that is easy to palpate through. Therefore the TMM is proposed as the best method to use by clinicians when examining participants with healthy BMI and no skeletal abnormalities.