Posted on December 31, 2015 | Comments Off on A case report of aneurysmal bone cyst of the lateral cuneiform bone of the foot

Aneurysmal bone cysts are rare, accounting for only 1-6% of all primary bone tumors.  They are commonly found in upper extremity bones and rarely in small bones of the foot.  Here, we are presenting a case of an aneurysmal bone cyst of the lateral cuneiform bone of the foot in a 35 year old female.  Pre and postoperative radiographs and intraoperative photograph of the tumor treated with intralesional curettage and packing of the defect with Simplex P® (Stryker Corporation, 2825 Airview Boulevard, Kalamazoo, MI, 49002 USA) bone cement is presented.

Aneurysmal bone cysts (ABC) are locally destructive blood-filled reactive lesions of bone. Any bone may be involved but the most common locations include the proximal humerus, distal femur, proximal tibia, and spine. Most occur in patients younger than 20 years old, and there is a slight female predominance [1].

Radiographs reveal an expansile lytic lesion that elevates the periosteum but remains contained by a thin shell of cortical bone.  It is most often eccentrically located in the metaphysis. When differentiating between a unicameral and aneurysmal bone cyst using MRI, the presence of a double density fluid level and intralesional septations usually indicates an ABC [1]. Grossly, an ABC is a cavitory lesion with blood filled septate spaces [1].

We are presenting here a rare case of ABC of the lateral cuneiform of the foot. Occurrence of ABCs in the foot has been rarely reported in literature.  This report helps in the supplementation of the current available literature for this tumor.

A thirty-five year old female patient presented with a complaint of pain in the dorsal aspect of the right foot for 3-4 months. Pain was constant in nature, aggravated by walking, and relieved by rest.  There was no significant past medical history or family history.  On physical examination, there was tenderness at the level of the tarsal bones on dorsal aspect of right foot.  Distal neurovascular status was intact and strength and range of motion were normal.

Antero-posterior and oblique radiographic views of the foot were taken and showed a well-defined lytic lesion involving the lateral cuneiform bone (Figures 1 and 2).  Adjacent bones were normal.  There was no evidence of cortical breech on radiographs. Magnetic resonance images (MRI) were obtained which showed double density fluid levels and septations. 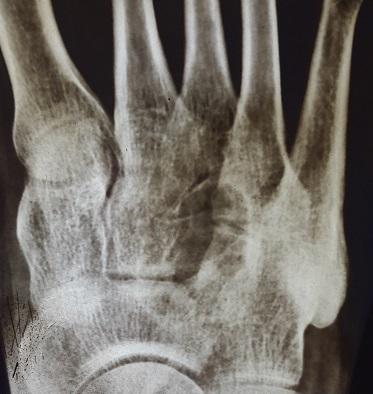 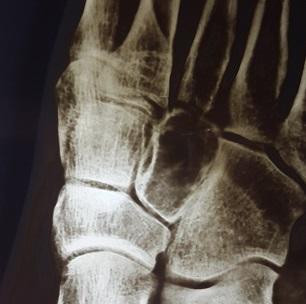 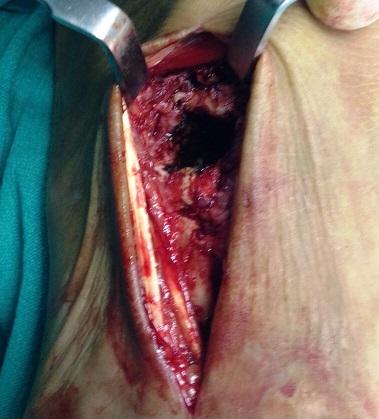 Figure 3 Intraoperative photograph of the lateral cuneiform showing a dorsally created window and inside of the lesion. 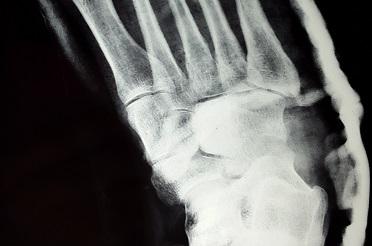 Fine needle aspiration cytology was done to confirm the diagnosis but the result was inconclusive.  Based on the radiographic and MRI findings, surgical intervention was chosen as treatment option for ABC. The surgical plan was to perform intralesional curettage and packing of the defect with Simplex P® (Stryker Corporation, 2825 Airview Boulevard, Kalamazoo, MI, 49002 USA) polymethylmethacrylate (PMMA) bone cement.

A dose of preoperative antibiotics (Injection Ceftriaxone + Sulbactam 1.5 gm) was given 30 minutes prior to surgery.  Patient was positioned supine on the operating table.  Spinal anesthesia was given and thigh tourniquet was used. A linear incision was made over the dorsum of foot over the lateral aspect, soft tissue dissection was done, and lateral cuneiform bone was exposed. With use of an osteotome and mallet, a window was created dorsally over the lateral cuneiform (Figure 3).  The defect was thoroughly curetted, and the tissue was preserved for histopathology. The defect was packed with Simplex P® bone cement.  Closure was done in layers, and a below splint was applied. Post-operative radiographs confirmed adequate packing of the defect (Figure 4). The post-operative biopsy report in our case confirmed the diagnosis of ABC.

An ABC may arise de-novo as primary lesions, but aneurysmal features are found secondarily in various other lesions, such as Giant cell tumor, Chondroblastoma, Osteobalstoma, and Chondromyxoid fibroma. Campanicci et al presented a classification of ABCs based on the size of the lesion and cortical erosion [2]:

Type 1: The cyst occupies the center of the bone with the profile either intact or slightly expanded. The lesion is usually metaphyseal in nature.

Type 2: The cyst occupies the entire width of bone and the profile is severely enlarged. They are termed “central cysts” and are primarily metaphyseal.

Type 3: The cyst appears as an eccentric, intraosseous lesion showing minimal expansion of the cortex.

Type 4: The cyst is subperiosteal with superficial erosion of the underlying cortex.

Type 5: The cyst has expanded into soft tissues and the cortex is destroyed.

The first report of an ABC dates back to 1942, when Jaffe and Lichenstein [3] described it as “a peculiar blood-containing cyst of large size”.

The primary standard of treatment has been extended curettage and grafting with a bone graft substitute. Lesions in the spine or pelvis can be treated with pre-operative embolization to reduce surgical bleeding.  Other treatment methods include intralesional injection and low dose radiation [4].

The recurrence rate after curettage of an ABC is 10-20%. Recurrence has been correlated with age younger than 15 years, centrally located cysts, and incomplete removal of cystic cavity contents [4].

Gibbs et al [5] reviewed forty-seven patients of ABC treated by excision.  Thirty-four patients received curettage with use of a high-speed burr, twenty-two of these had filling of defect with cancellous allograft and three with polymethylmethacrylate. Four of the thirty-four patients had local recurrence.  They concluded that success rate of almost 90% can be achieved with thorough curettage.

Schreuder, et al. [6] from the University Hospitals of Nijmegan and Groningen treated twenty-seven ABCS with curettage and cryotherapy.  A mean follow-up of forty-seven months was done and they reported only one local recurrence.

We intend to report this rare case of ABC to supplement the current available literature of this pathology.