Case study: Schwannoma of the tibial nerve in a patient with a history of neurofibromas

Posted on September 30, 2019 | Comments Off on Case study: Schwannoma of the tibial nerve in a patient with a history of neurofibromas

A schwannoma is a common benign tumor of the peripheral nerve sheath.  Schwannomas are rarely found in the foot and typically do not elicit any painful symptoms. We report the case of a large schwannoma eliciting tarsal tunnel like symptoms in a patient with a previous history of neurofibromatosis within the spine. The patient had previously undergone lumbar laminectomy for neurofibromas of the lumbar spine that went on to develop pain in the right foot.  She then underwent extensive workup of this persistent right foot pain. She was treated for plantar fasciitis for several years, until presenting to our clinic. At that time, EMG findings showed tibial neuropathy and medial plantar nerve degeneration; accompanied by MRI findings consistent with a schwannoma of the tibial nerve. The patient underwent surgical excision of the mass. The pathology report revealed an encapsulated biphasic tumor composed of compact hypercellular areas and mixed hypocellular areas with foci of hyalinization with no malignant features measuring 3.7 x 2.5 x 2.0 cm, consistent with a diagnosis of schwannoma.  The patient had an uneventful postoperative course. At one year follow up, she was pain free but had persistent neuropathic changes to the distal forefoot. Currently, there are few reports in the literature of schwannomas arising the tibial nerve eliciting the symptoms of tarsal tunnel syndrome. The incidence of such a schwannoma in association of a patient with a history of neurofibromas is even more rare.

A schwannoma is a benign soft tissue tumor of the peripheral nerve sheath. These slow-growing tumors can be difficult to distinguish from other benign tumors based on clinical findings [1]. The principal diagnosis is made histologically by by identifying the principle cellular elements—Schwann cells. This tumor was first described in the thorax [2], and is typically found in the head, neck, and flexor surfaces of the extremities [3]. The most common nerve affected is the eighth cranial nerve; however, the spinal roots as well as the sympathetic, vagus , ulnar, and peroneal nerves are commonly affected as well [3,4]. This tumor is rarely found in the tibial nerve in the region of the tarsal tunnel [5-9]. Finally it is highly uncommon to find this tumor in association with a neurofibroma, with only one report of a schwannoma of the posterior nerve accompanied by a neurofibroma in the tarsal tunnel itself [10]. There are currently no other reports of a patient with a schwannoma eliciting secondary tarsal tunnel syndrome in a patient with a history of symptomatic neurofibromas elsewhere in the literature.

We report a case of a large schwannoma of the tibial nerve located in the tarsal tunnel in a patient with a previous history of neurofibromas in the spine.

A 69-year-old female presented to UPMC Susquehanna Foot and Ankle Clinic in July 2015 with right-sided plantar fascial pain accompanied by plantar foot numbness and tingling.  On clinical exam, her foot was neutrally positioned and demonstrated no clinically palpable abnormality. She did have a positive Tinel and Valleix sign. There was mild tenderness along the plantar fascial ligament origin. The patient had been treated by an outside physician for over 5 years with plantar fasciitis.  She had tried various conservative treatment methods including custom orthotics, physical therapy, and a series of corticosteroid injections, all of which provided only temporary relief. She additionally had a history of a prior lumbar laminectomy secondary to pain, after which she began to notice increasing right foot pain and paresthesias.  Her previous spine MRI (June 2014) revealed extramedullary enhancing masses and nerve sheath tumors leading to a diagnosis of neurofibromas.

During her first visit to our clinic in July 2015, an EMG from the previous month was reviewed.  On EMG, there was evidence of tibial neuropathy and degenerative changes of the medial plantar nerve leading to a diagnosis of tarsal tunnel syndrome.  After her first visit, the patient was recommended an additional course of physical therapy, given a script for new custom orthotics, and prescribed a nonsteroidal anti-inflammatory drug, meloxicam (Mobic). Following this course of treatment, the patient’s symptoms did not improve (Figure 1). An MRI was then ordered of the area which revealed a well-encapsulated oval lesion measuring 4.2 x 2.2 x 2.1 cm, appearing hypointense on T1 and hyperintense on T2 consistent with a diagnosis of schwannoma (Figure 2). 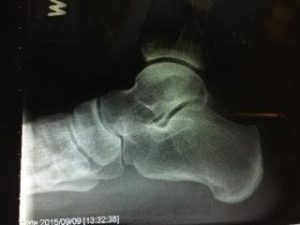 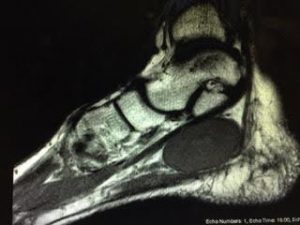 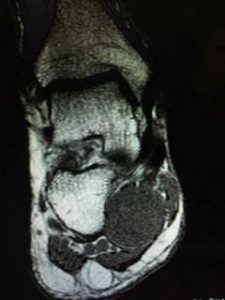 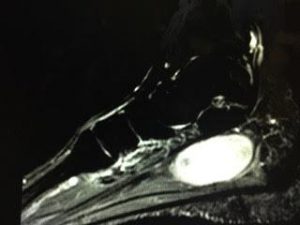 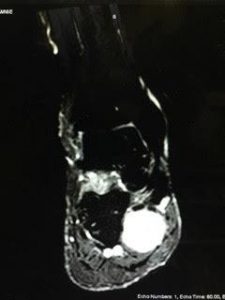 The patient was brought into the operating room and placed on the table in a supine position and general anesthesia was administered. Local anesthesia was then administered to the area utilizing a 1:1 mixture of 1% lidocaine plain and 0.5% bupivacaine plain.  A pneumatic calf tourniquet was applied and inflated. 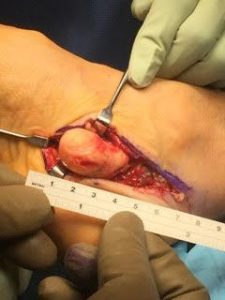 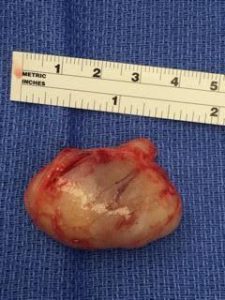 Figure 4 Intraoperative specimen of the soft tissue mass after removal from tarsal tunnel.

The tibial nerve was then identified and the proximal portion was mobilized. The dissection was then carried distally exposing a large, swollen tibial nerve just proximal to its bifurcation into the medial and lateral plantar nerves.

A longitudinal incision was then made in the epineurium and the marginal nerve fibers were mobilized  and retracted in an extra capsular fashion. The tumor was then fully exposed. The plane of the tumor capsule was gently dissected from the epineural layers and the tumor was then separated without significant damage to the surrounding nerve fascicles, though there were several small fascicles noted to be entering the tumor at the distal and proximal poles (Figure 3). These fascicles were isolates in an effort to minimize nerve damage, but due to local ingrowth they were impossible to separate from the tumor and were transected.

Once the tumor was completely removed, the area was thoroughly flushed with sterile saline solution.  The remaining tibial nerve at the level of the lesion was examined and found to demonstrate significant degenerative changes. As there was no obvious tissue to repair, an amniotic graft was then wrapped around the degenerative portion of the nerve in order to promote healing and prevent adhesions.

The incision was then closed in a layered fashion utilizing monocryl suture for the subcutaneous tissues and nylon suture for skin closure. The operative site was then infiltrated with an additional 10 cc of 1:1 mixture of 1% lidocaine plain 0.5% bupivacaine plain.   The incision was then dressed with xeroform and covered with a dry sterile dressing. A modified Jones compression dressing was then applied. The tourniquet was then deflated and a prompt hyperemic response was noted to all digits.

The pathology report revealed an encapsulated biphasic tumor composed of compact hypercellular areas and mixed hypocellular areas with foci of hyalinization with no malignant features measuring 3.7 x 2.5 x 2.0 cm, consistent with a diagnosis of schwannoma (Figure 4).

The patient was permitted to immediately weight bear postoperatively in a surgical boot. At two weeks postoperative, she underwent suture removal and was transitioned to a street shoe as tolerated. She was followed until one year postoperatively, and found to have no functional limitations, but did continue to notice sensory changes in the plantar foot.

Schwannomas are benign, encapsulated peripheral nerve sheath tumors. They are commonly described throughout the literature by a variety of names: neurilemoma, neuroschwannoma, peripheral glioma, perifibroma, and schwannoma [11,12]. Typically these tumors are found elsewhere in the body (trunk, head, neck, upper extremities) and even more rarely in the lower extremities [2-3, 13].  The foot is noted only to be affected in approximately 10% of cases [3]. There are even fewer noted in the literature to be associated with the tibial nerve and eliciting tarsal tunnel syndromes [5-9].

Neurofibromas are not typically found in with the foot and ankle.  In a study by Bakotic and Borkowski of primary soft tissue neoplasms of the foot, schwannomas and neurofibromas were noted to account for only 5.4% and 2.7% of all benign soft tissue tumors, and 2.0% and 1.0% of all total neoplasms respectively in the foot and ankle [14].  It is rarely reported to find these two types of tumors in association with one another, with only one report of a schwannoma associated with a neurofibroma in the tarsal tunnel [10].

There are currently no other reports of a patient with a schwannoma eliciting secondary tarsal tunnel syndrome and a history of spinal neurofibromas. Currently the recommended treatment for schwannomas of the foot and ankle is open surgical resection [15]. Fortunately, surgical resection has positive results with minimal morbidity and recurrence if resected entirely [16,17]. It is recommended to remove the lesion in total with great care not to damage the nerve through excessive violation of the nerve sheath or compromising the marginal neural fibers.

We report a case of successful excision of a schwannoma of the tibial nerve located within the tarsal tunnel, eliciting symptoms leading to a diagnosis of tarsal tunnel secondary to tumor. The patient did have a significant medical history of painful neurofibromas of the lumbar spine confirmed on MRI with a subsequent lumbar laminectomy. While the patient did have EMG findings positive for tibial neuropathy and degeneration of the medial plantar nerve, we cannot effectively determine whether the patient’s symptoms were solely related to compression from the longstanding mass within the tarsal tunnel or if they were possibly exacerbated by the patient’s history of lumbar neurofibromas with subsequent surgical intervention.

The patient’s postoperative course was uneventful.  She did regain some hindfoot and midfoot sensation, while completely eliminating her preoperative pain.  However, parasthesias persisted within the forefoot.

This entry was posted in Uncategorized and tagged neurofibromatosis, neuroma, plantar fasciitis, Schwannoma. Bookmark the permalink.