Ankle arthrodiastasis in conjunction with treatment for acute ankle trauma

Posted on September 30, 2020 | Comments Off on Ankle arthrodiastasis in conjunction with treatment for acute ankle trauma

Arthrodiastasis has been described as an alternative joint sparing procedure for more advanced stages of arthritis. The use of joint distraction has been gaining popularity in foot and ankle surgery, especially with regards to post-traumatic ankle arthritis. Less is known about the effects of arthrodiastasis in cases of acute ankle trauma. This case series presents four cases of intra-articular ankle trauma that were treated with arthrodiastasis using external fixation along with reduction with/without internal fixation. The external fixators were kept on for at least 6 weeks with follow-up of at least 1-2 years for each case. These cases represent high impact injuries that were destined for post-traumatic arthritis that would eventually result in a joint destructive procedure. The results were promising in all cases, by at least delaying the need for a joint fusion or replacement in one case and foregoing the need for such procedures in the other 3 cases within our follow-up period.

The incidence of people with post-traumatic arthritis accounts for nearly 12% of those with symptomatic lower extremity arthritis [1]. Among those with ankle joint osteoarthritis, previous trauma is the most common etiology ranging from 20% to 78% incidence [2-4]. These patients usually end up with joint destructive procedures such as joint fusion or replacement.

Arthrodiastasis is an innovative treatment for ankle arthritis to enhance ankle joint range of motion, diminish pain, and potentially delay or forego ankle joint destructive procedures. Arthrodiastasis of the ankle has been described as an alternative and/or adjunctive salvage procedure for arthritis in patients not amenable to ankle joint replacement or arthrodesis [5]. The procedure is not technically demanding for the surgeon and, long-term, can cost less than arthrodesis or arthroplasty.

Various theories exist to explain how arthrodiastasis has a positive effect on joints. A theory by Gavril Ilizarov suggests applying tension to tissues with distraction increases micro-vascularity to articular cartilage, therefore assisting in cartilage repair [6]. This tension creates a hypervascular state which increases synthesis of nutrients, proteoglycans and in turn helps stimulate chondrocyte formation [6].

Lafeber described a theory in which joint unloading with resulting fluctuations in intra-articular pressure from joint distraction along with concomitant weight bearing, the activity of chondrocytes increases which creates proteoglycans that have the ability to repair articular cartilage and stimulate pluripotent mesenchymal cells to differentiate into articular cartilage [7,8]. This concept of mechanical offloading with continuing pressure changes was shown to increase proteoglycan synthesis by 50% in osteoarthritis knee condyles undergoing arthrodiastasis [7,9]. This process also decreases the inhibition of proteoglycan synthesis by mononuclear inflammatory cells, decreases production of catabolic cytokines and provides increased nutrition delivery to chondrocytes [7].

Both theories predicate the notion that osteoarthritic ankle cartilage is capable of regeneration. Arthrodiastasis has been used over the years with chronic osteoarthritis of the ankle with good results. A review by Dr. Rodriguez-Merchan published in 2017 looked at 14 articles that included patients with end stage osteoarthritis undergoing ankle joint distraction. A total of 249 patients were included in this review with follow up ranging from 1-12 years. Overall 73-91% of patients had good results within their follow up and 6.2-44% of patients ended up with either a joint fusion or replacement [10]. This review serves as a good foundation on the results of ankle joint arthrodiastasis in chronic cases of osteoarthritis, however little is known on its effects during its application in acute trauma. We present a series of acute ankle trauma in which we employ external fixation for arthrodiastasis. In these cases studies, each patient suffered from an intra articular ankle fracture. In the acute setting, the fractures were reduced and an external fixator was applied. Ankle joint diastasis of 5-10mm was applied to the ankle joint utilizing the external fixator. The external fixators were left in place for six to eight weeks.

A 30 year-old male sustained an open bimalleolar fracture while operating his horse-drawn lawn mower. Upon presentation to the emergency department, he was evaluated and subsequently taken to the operating room for wound washout, flap closure, application of a delta frame for stability with percutaneous kirschner wire fixation to the medial malleolus. Once the soft tissue envelope was stable nine days later, open reduction and internal fixation was performed. The same delta frame remained intact and the ankle joint was distracted in an attempt to preclude ankle arthritic changes. The frame remained in place for six weeks allowing for ankle joint arthrodiastasis during this time. The patient was seen in the office 1.5 years after surgery and was clinically doing well. He is ambulating without orthoses and able to perform his daily activities without issues. Radiographic images revealed a healed fracture with the ankle mortise in good alignment, without signs of degenerative arthritis. 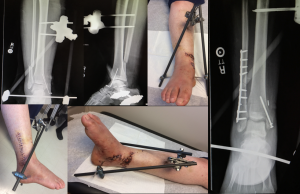 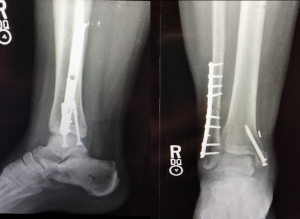 A 56-year-old female presented after a motor vehicle accident where she sustained a right closed comminuted talar fracture. Radiographs and a CT scan revealed a Hawkins type IV talus fracture. She was subsequently taken to the operating room after full evaluation in the emergency department. Closed reduction was attempted with a calcaneal pin but was not possible. Therefore, a lateral sinus tarsi approach incision was made from the tip of the fibula extending dorsally over the 4th metatarsal to expose the talus. The talus was reduced and fixed percutaneously with Kirschner wires and a delta frame was applied.

Eleven days later, after the soft tissue envelope improved, she was taken back to the operating room for subtalar and talonavicular joint arthrodesis in an attempt to maintain blood supply to the talus. The deltoid ligament was repaired and a modified Brostrom augmentation was performed. A ring external fixator was placed to achieve stability as well as arthrodiastasis at the ankle joint. The external fixator was removed two months postoperatively. Minor medial ankle arthritis was noted on postoperative radiographic images which worsened over the years. Two years postoperatively the patient is contemplating joint destructive procedures. 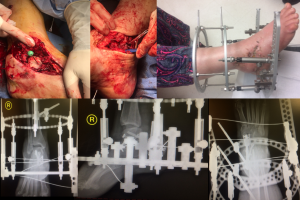 A 34-year-old male patient was admitted from an outside hospital two days after a trauma where a car he was repairing fell on his left lower limb. He was noted to have a closed dislocated fracture of the left talus, Hawkins type III, and displaced medial malleolus fracture. Closed reduction and splinting was performed at the previous hospital. After full evaluation at our facility, open reduction of the talus and closed reduction of the medial malleolus was performed followed by the application of a ring external fixator. After adequate reduction, approximately a half centimeter of distraction of the ankle joint was produced. This frame was left in place for four months. Following frame removal, the patient continued physical and functional treatment aimed at strengthening the tibial and foot muscles and was encouraged to increase range of motion of the ankle. The patient was able to return to his normal daily activities and return to work. At his two year follow-up he has not needed to go on to further joint destructive procedures and continues to be able to perform his activities of daily living without issue. 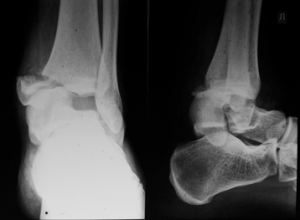 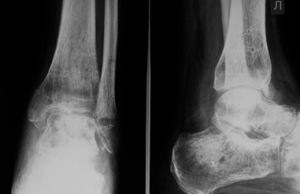 A 15-year-old male patient who presented with chief complaint of right foot and ankle injury sustained after a fall while riding a BMX bike. The patient did have a history of a previous talus fracture 3 years prior to this presentation which was treated non-surgically. Radiographic images revealed a Hawkins type III talar neck fracture which was confirmed and evaluated on CT scan. The patient underwent open reduction with internal fixation of the talus fracture with two cannulated screws from posterior to anterior and application of an external fixation with approximately 6-mm of joint distraction.

The external fixator was removed after 6 weeks and the patient was gradually transitioned from a walking boot and into well-supportive sneakers while undergoing physical therapy. He was able to return to his daily activities, sports and BMX bike. The patient was seen in the office 1.5 years after surgery without any clinical or radiographic signs of post traumatic arthritis. 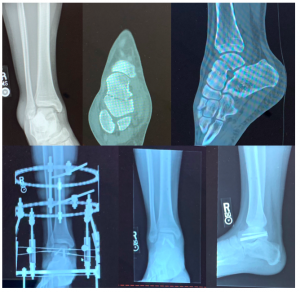 Acute ankle arthrodiastasis with concomitant ankle fracture, open reduction with internal and/or external fixation, should be considered in an attempt to preclude post-traumatic ankle arthritis. This becomes more crucial in cases of intra-articular ankle trauma, where the rate of post-traumatic arthritis increases. With arthrodiastasis, the changes in hydrostatic pressure provide an environment for chondrocyte repair and regeneration thus decreasing the chances for post-traumatic arthritis and the potential need for a joint fusion or replacement. The combination of mechanical offloading along with the microangiogenesis that is produced with increased tension to the soft tissue structures have shown to aid this process of repair.

Vito, et al., distracted 65 arthritic ankles using the Ilizarov frame for 6 weeks with distraction of 5-10 mm [11]. The patients had marked reduction in pain at 12 months for all patients except two: those two went on to arthrodesis. Valburg, et al., reported an average of two years pain relief following three months of arthrodiastasis with an Ilizarov frame [12]. Ploegmakers, et al., assessed the use of arthrodiastasis in 22 patients and reported 73% of the patients had significant improvement at seven years [13]. Although these series were not in the acute setting, one can assess the benefit these series showed with arthrodiastasis of the ankle joint.

This case series showcased four different cases of intra-articular ankle trauma where ankle diastasis was employed as part of the fixation in the acute setting. Successful outcomes were noted in three patients thus far at one to two years of follow up. One of the patients will require a joint fusion or replacement after 2 years. With the widening list of indications for arthrodiastasis, we believe there are benefits of using joint distraction in acute intra-articular trauma to either forgo or delay post-traumatic arthritis. This review serves as a foundation to pursue further indications for arthrodiastasis, however it does have limitations. The sample size is small at this time due to lack of extended follow-up. The follow-up time period listed for these four cases is 1-2 years. The results may prove to be different in the future with extended follow-up, however ankle joint diastasis remains a viable option in patients with intra-articular trauma to possibly reduce or delay the need for arthrodesis in the future