Extrasynovial Synovial Osteochondromatosis of the Ankle: A case report

Posted on June 1, 2010 | Comments Off on Extrasynovial Synovial Osteochondromatosis of the Ankle: A case report

A 56 year-old female with history of trauma to the left ankle and greater than four year history of pain and increasing soft tissue mass at the anteromedial left ankle presents for evaluation. She notes that the lesion has been slowly increasing over time and she has pain associated with dorsiflexion of the ankle and has problems finding accommodative shoe gear. This lesion is well circumscribed, nodular and firm and is in the distal course of the anterior tibial tendon. Palpation of the lesion does not elicit pain; however the patient has decreased range of motion on dorsiflexion of the ankle and discomfort associated with this range of motion.

Radiographic analysis of the ankle reveals a radioopaque calcific nodule (Fig. 1) anterior to the medial malleolus and dorsal to the talar neck. MRI analysis shows an encapsulated mass external to the ankle joint capsule with an inhomogeneous internal signal measuring 1.6X1.5X2.2 cm. (Fig. 2) The mass is viewed on multiple planes and cuts and has a fatty capsule with surrounding edema, the composition of the mass has parts which are isointense with bone and cartilage on multiple spins, the remainder of the lesion does not appear to be isointense with other tissues and did not have a fluid density. Based upon these findings, the provisional diagnosis of chronic calcific ganglion was chosen since there was not a classic pattern of cartilage capsule with central ossification as in synovial osteochondromatosis. The patient was scheduled for outpatient surgical resection of the mass after all risks and benefits were discussed. Once the anteromedial ankle incision was made an extremely firm, encapsulated mass measuring 3x2x2cm was encountered external to the ankle joint capsule and free from the anterior tibial tendon. Once sent to histopathology (Figs. 3), with the combination of osteoid and cartilage present in the specimen combined with our physical and radiological exam, the diagnosis of extrasynovial synovial osteochondromatosis was made. 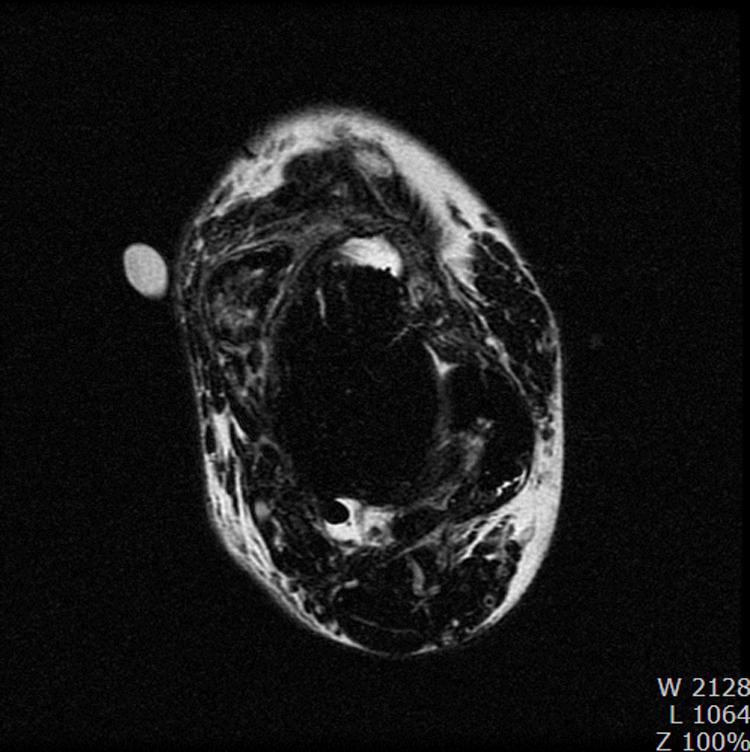 At nine months postoperatively, the patient is asymptomatic with no evidence of recurrence on serial physical examination and radiography.

In our patient, synovial osteochondromatosis may have been more easily diagnosed early on, if numerous densities were noted on plain film within the ankle joint. [6,7,8] Through physical exam, radiography, magnetic resonance imaging (MRI)and histopathology a proper diagnosis could be made. The natural history of the disease process as described by Milgram is self- limiting and generally the loose bodies are extruded from the synovium however not from the joint. [3] In our case, the size of the lesion may have caused it to be extruded from the ankle joint or a synovial lined tendon sheath to make it extrasynovial. Malignant transformation is a concern, with 5% possibility of transformation, and recent efforts have been made to find markers to differentiate disease processes to better predict transformation. [9] Close post-operative follow-up is recommended as cases reviewed involving malignant transformation dealt with recurrent osteochondromatosis prior to the ultimate diagnosis of chondrosarcoma. [9]

Comments Off on Extrasynovial Synovial Osteochondromatosis of the Ankle: A case report